Just as Suzi LeVine was trying to escape the mess she had created at the Washington State Employment Security Department, by obtaining a high-paying job in the Biden Administration, she and her husband were making large political donations to Democrat politicians and organizations.  The LeVines could have made the substantial contributions to U.S. Senator Patty Murray’s campaign and the Democrat National Committee at any time, as that is certainly legal, but suspiciously the donations were made just as Suzi LeVine was seeking a federal job.  This has certainly raised plenty of eyebrows, though it’s really just the latest example of Democrats (who claim to be fighting various types of “privilege” on expensive government programs using your tax dollars) rewarding those who have the “privilege” to financially assist liberal endeavors. (Click to read full Shift article)

The gross incompetence of Governor Jay Inslee’s Washington State Employment Security Department (ESD) continues to cost state taxpayers money.  The latest expensive breakdown at the ESD is related to the state agency failing to provide documents related to a private citizen’s investigation into the historic theft of more than $650 million by a foreign crime ring, one of the largest heists in American history.  Author Lynn Brewer (who Shift interviewed last December) sent a public records request to the ESD asking for documents (including communications between ESD Commissioner Suzi LeVine and Governor Inslee) related to the theft of public funds.  The department never responded to the request, which forced Brewer to take the department to court.  Before the court ruled on the matter, ESD and Brewer settled on a $100,000 payment and agreed to several procedural changes at the department (which of course included the hiring of more state workers, for the Democrats never pass up any excuse to increase the size of government).  Brewer said that she has yet to receive all of the documents she requested from ESD. (Seattle Times and Shift’s Newsmaker Interview)

Senate Republican Caucus Chair Ann Rivers (Clark County) took strong exception to Governor Inslee congratulating himself for “winning the Super Bowl” in an article titled “Governor, you are no Tom Brady.”  The governor made his tone deaf and self-serving comments last week when he was asked if he would support reforming the governor’s emergency powers authority.  Senator Rivers (who was recently a Shift Newsmaker Interview to discuss the governor’s poor pandemic response) first detailed the catastrophic failure of Governor Inslee’s Employment Security Department to protect taxpayer funds from fraud, and then subsequently failing to deliver promised benefits to hundreds of thousands of Washington residents who were suddenly without income. Senator Rivers, using a football metaphor, said the governor “failed to bench” his handpicked head of the dysfunctional ESD, despite her poor performance in a big game situation.  Senator Rivers then went on to detail how Washington State lags far behind most other states in people employed (175,000 fewer people with jobs today than before the pandemic), has the fifth worst record for businesses closed, and is near the very bottom for the percentage of children who received in-person instruction. Senator Rivers also pointed out that the number of drug overdoses significantly jumped during the pandemic.  It is laughable that the governor considers these dismal facts as being “Super Bowl” quality, when they are more indictive of a poorly coached expansion team’s season. (Washington State Republican Senate Caucus media release, Q13’s The Divide, and Shift)

The state’s silly ban on plastic grocery bags will now commence October 1st, after grocery stores and health officials had asked for a delay of the original ban start date at the beginning of 2021, due to COVID-19.   Despite numerous scientific findings that bagging alternatives will cause more environmental damage than the continued use of plastic bags, wealthy environmental groups were successful in passing SB 5323 near the end of the 2019 legislative session to enact this silly law. (MyNorthwest, Washington Policy Center, and Washington Legislature Bill Summary)

The Washington State Department of Health’s incomplete data finally shows that the 70% of Washington State adults (defined by Jay Inslee as above the age of 16) have received at least their first dose of the COVID-19 vaccine.  This comes more than five weeks after the Biden White House, using more complete data collected by the federal government, had congratulated the state for reaching that 70% mark.  Despite state health officials admitting that the federal data was more accurate since it included doses administered by the federal government to military members and their families, and to veterans in the state, Governor Inslee refused to recognize the federal government’s data and keep his pledge to lift state restrictions once the 70% threshold was reached.  Thus, many businesses were forced to suffer almost four additional weeks of unnecessary restrictions and economic damage.   (KING5 News, Twitter, and Washington Department of Health media advisory)

In an exceptionally rare occurrence, the Seattle Times has chosen to not make a recommendation in one of the Seattle City Council races on this year’s ballot.  The Times decision is especially noteworthy since the incumbent councilmember is in the race.  The Times editorial was extremely critical of far-left Councilmember Teresa Mosqueda, writing that she has been a player in “four years of often wrongheaded decisions that jolted Seattle onto the wrong course. The council majority has embraced ideology over substance, pilloried city businesses and undermined public safety.”

The Times was especially critical of Councilmember Mosqueda’s constant attack on Seattle employers with her numerous tax proposals, which is no surprise given her history as a union activist before being elected to the council. The first-term councilmember was the primary sponsor of the misnamed “JumpStart Seattle” payroll tax, which the Times describes as a tax that “punishes businesses for daring to pay Seattleites well.” The Times was also unimpressed with the two individuals who have filed to run against Mosqueda and wished that one of the “well-qualified mayoral candidates in an overstuffed field” had chosen to run for one of the two at-large council positions which are on the 2021 ballot.  This makes us wonder, what specific “well-qualified” mayoral candidates are they talking about? (Seattle Times)

Confusion and allegations swirl around the effort to recall Socialist Seattle City Councilmember Kshama Sawant.  Last week, Councilmember Sawant made a surprising announcement that she is encouraging her supporters to sign the petition to recall her.  She made that announcement because she would rather have the recall question on the November general election ballot (when her evidently normally lazy supporters are more likely to participate), instead of in a special election scheduled for next February (when Sawant’s supporters would be less likely to participate).

In more agriculture bad news after a brutal legislative session, Pacific Northwest wheat farmers are experiencing a significant decline in wheat production compared to last year, according to the National Agricultural Statistics Service.  Washington State’s winter wheat is down 30% while spring wheat is down 39%.  Oregon is down 28% in winter wheat harvested. Idaho has experienced a 15% decline in winter wheat production and a 22% reduction in spring wheat..  (Pacific Northwest AG Network)

Pacific Northwest cherry farmers are estimating a 20% reduction in fresh picked cherries despite their efforts to protect their crops during the recent heat wave.  The record-breaking heat wave hit just before many of the state’s cherries were to be picked, forcing much of the crop to be  reallocated to the processing market, which yields far less revenue for the farmers. (Yakima Herald)

Washington State Senator Jim McCune provides background in a guest editorial on the controversial Critical Race Theory curriculum and provides advice to parents who are seeking to keep this radical philosophy from being taught to their children in public schools.  Senator McCune writes “Parents may be alarmed to learn that state sanction is being given to a program to indoctrinate students in leftist philosophy and turn them into social-justice warriors. Certainly some people hold these opinions. But for a teacher to declare them to be fact is to poison our children’s thinking, deepen racial divisions, undermine support for our constitution and republic, and expose children to harassment, humiliation and abuse based on the color of their skin.” Or, as the Democrats prefer, we can just use race to make decisions. (Click to read full guest editorial) 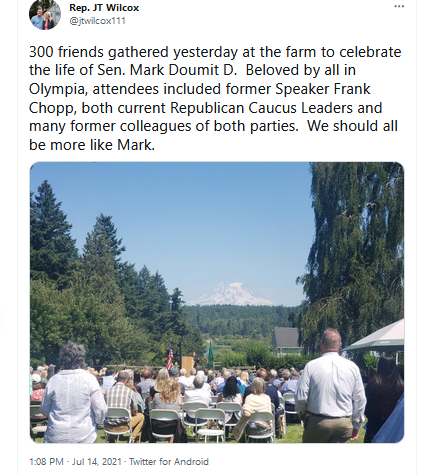 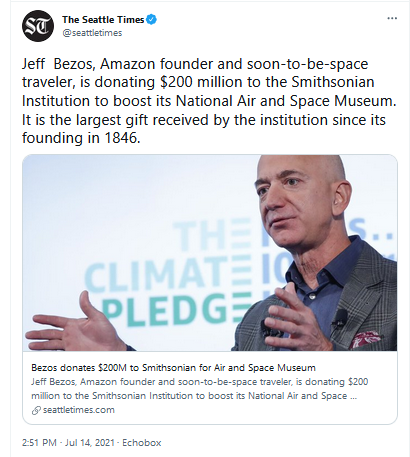