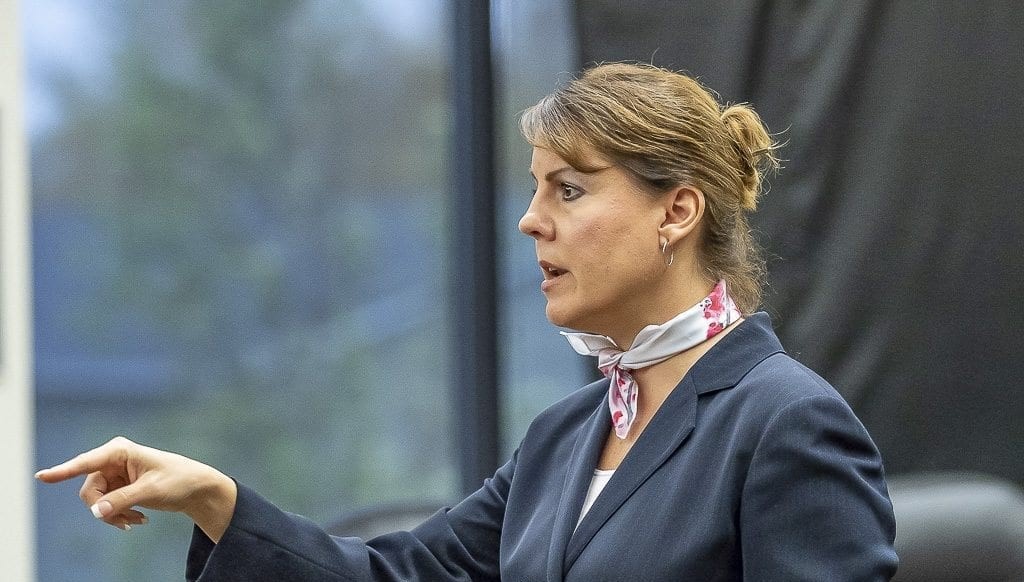 counties back to Phase 2.  Senator Rivers contends the state is using meaningless data (and they keep moving the data “goal posts”) which could allow the governor’s use of emergency powers to “never end.”  Following this week’s release of the Washington State Auditor’s report on the management failures at Employment Security Department (which resulted in the loss of $1.1 billion), Senator Rivers stated, “accountability for the ESD debacle lies with Governor Inslee,” and that “nothing he does can ever remove that stain from his legacy.”

What are your views on Governor Inslee’s announcement that he is unilaterally moving three counties back to Phase 2?

First, the fact that he’s still making these decisions unilaterally only highlights how the majority Democrats have shown zero interest in reforming our state’s emergency-powers law, with the end of the session barely one week away.

Notice how the governor managed to spare several other counties from moving backward along with Cowlitz, Whitman and Pierce, just by moving the goalposts? And how he’ll also allow restaurants in Whitman, Pierce and Cowlitz to remain at 50% capacity as long as they can open windows and keep air flowing? I’m glad for those other counties, and for the restaurants, but the reality is, Governor Inslee has a history of punishing people even while admitting they have done everything right. He did that to businesses by shutting them down in November, based on his own special form of “science,” and it’s happening to Cowlitz, Whitman and Pierce because he insists on continuing to judge counties by their COVID-19 case counts and hospitalization rates.

The focus should be on two more meaningful statistics: hospital capacity, and the number of deaths. If the governor remains obsessed with the number of COVID cases, the state of emergency we’re in may never end – but who knows, maybe that’s OK with him.

Your district is just to the south of Cowlitz County.  What are you hearing from your northern neighbors about the actions?

The people of Cowlitz County already had good reason to be unhappy with Governor Inslee. They remember how two years ago, he did an about-face and pulled his support for a project that would have brought good jobs to their county – a methanol refinery proposed for Kalama. That reversal was even mentioned on the floor of the Senate recently, when we were debating the governor’s so-called “climate commitment act,” which is more accurately called “cap and tax.” Inslee thought it was perfectly fine for his Department of Ecology to include the “global net reduction” of carbon emissions in its evaluation of the Kalama proposal. But when Republicans tried to tie a global net reduction of CO2 to the provisions of Senate Bill 5126 – as in, why would Washington adopt a policy to reduce carbon if any reductions would be so easily canceled out by other nations’ emissions? – the Senate’s Democrat majority didn’t think it was fine at all.

A family member works in Cowlitz County, and he’s not at all convinced the folks there are going to rush to comply with the governor’s Phase 2 dictate. They’ve noticed how Inslee and his fellow Democrats have moved further to the political left, which may explain why Cowlitz County helped oust two longtime Democratic legislators in the 2020 election, giving the county an all-Republican slate of state lawmakers for the first time in a very long time.

The State Auditor’s Office has released the first of many reports on the failures at Governor Inslee’s Employment Security Department.  In their investigation the auditors state that as much as $1.1 billion could have been lost by the dysfunctional state agency.  What are your initial thoughts on the report and who should be held accountable for this massive failure?

I remember how at first, ESD disclosed the existence of the fraud only in terms of how much money it had allegedly recovered. But after I told Lacamas Magazine this past June that “nearly $1 billion” had been lost to fraudsters, the agency suddenly allowed that the loss might be up to $650 million instead. I never bought that, because people inside the agency were telling me a different story, but the governor and the Legislature’s Democratic leadership circled the wagons around the former ESD commissioner, and the news media didn’t dig as much as I hoped, so no one was held accountable. All I could do was push for the state auditor to get involved, and I expected the outcome would show a larger loss than was being acknowledged.

Now that we’ve got this audit finding of a potential $1.1 billion loss, which is higher than even I’d suggested, I have some sense of vindication. But more than that, I’m troubled by how ESD is responding. The agency’s self-inflicted security flaws allowed false and incorrect information through, and fraudsters lined their pockets with money that should have gone to legitimate claimants – and now ESD is using those same words – “flaws” and “false” and “incorrect” – to attack the negative audit. That takes some nerve.

Our state is already rid of Suzi LeVine, the ex-ESD commissioner whose real skill was being a Democratic Party fundraiser. The trouble is, ESD is still trying to minimize the massive fraud loss. Meet the new boss, same as the old boss. If Republicans had the majority in the Senate, we’d likely launch a committee-level investigation, as we did after the Department of Corrections’ early-release fiasco several years ago.

Ultimately, accountability for the ESD debacle lies with Governor Inslee. Countless Washington families were hurt by the agency’s mismanagement, and nothing he does can ever remove that stain from his legacy.

What are your views on the controversial Low Carbon Fuel Standard and the Cap-and-Trade bill?  If passed, how will these impact the lives of your constituents?

These bills are left over from the governor’s failed campaign for president, and clearly, he wants them to be part of his legacy as governor. Senate Bill 5126 is less “cap and trade” and more “cap and tax.” It wouldn’t be a tax in name, but the end result is the same – it’s a creative way for the state to bring in an estimated $500 million per year by selling carbon-emissions permits to employers in our state.

Knowing how costs can be passed down to consumers, it’s expected the policy in SB 5126 would quickly lead to a 26-cent increase in the cost of a gallon of gas. House Bill 1091 would basically force refiners to change their formulations. Fuel would be weaker, and by adding to production costs, the bill also adds another 29 cents of cost per gallon. If these bills become law, then, we’re talking about a 55-cent increase in a gallon of gas – and for what? It won’t produce the road improvements the people have come to expect when government causes fuel prices to go up.

It’s frustrating to hear my colleagues in the Democratic majority talk about being “progressive” and ‘putting people first” and applying an “equity lens” to all of their votes – then they pass bills like these that are regressive, and put government first, at the expense of the poor and the historically marginalized communities they claim they want to help.

There are plenty of transportation needs around our state, but this isn’t the answer – and it also will do little to improve the quality of our air, which is already clean. The operating budget proposed by Senate Republicans could fund a very long list of transportation projects while weaning our state away from the gas tax, but that better way was turned down by the majority when we brought it to the Senate floor in late March. You wonder why.

What has been your assessment of the remote legislative session?  Are there any aspects of it that you would like to see continued once a normal session is allowed to take place again?

Our legislative tech staff has done a tremendous job this session, but not even they can prevent every one of the predictable technical difficulties – or the problems that aren’t foreseen, like senators losing connectivity although they’re working from their offices at the Capitol.

When Republicans led the Senate we put priority on enabling remote testimony, and that groundwork certainly has paid off. I like it that people can testify from their homes, and I hope that continues. Otherwise, trying to make policy remotely is like trying to teach remotely. Sure, we’re able to debate and vote, but something important is missing – call it the human aspect. No hallway conversations, no walking to committee together, none of the face-to-face opportunities that can build trust and lead to solutions.

Also, it really chaps my hide that the governor has kept the fence up around the Capitol – and the public out – all session long. It makes a difference, for the better, when we can see the people we serve and hear their voices. It’s not a stretch to suggest the lack of public interaction may have emboldened my Democratic colleagues to pass some of the lousy bills we’ve seen.

You have sponsored two bills that are related to medicine that have passed the legislature during the 2021 session.  The first (SB 5018) is related to acupuncture and Eastern medicine, and the second bill (SB 5423) relates to telemedicine consultations.  What can you tell us about these bills and why were they necessary?

SB 5423 builds on work by previous Republican senators to expand access to telemedicine. In this case, it allows a licensed practitioner from out of state to consult with a Washington-licensed practitioner when diagnosing or treating a patient in our state. To me it’s a convenient way to bring in outside medical expertise, and with so many people having gained “virtual” experience in the past year, the bill makes even more sense now than it would have pre-pandemic.

If you could pass one law in the legislature, what would it be and why?

I’ll go back to how the majority Democrats apparently are willing to let the people go back to living under the one-person rule they endured for most of 2020. That’s not OK. We need to reform the emergency-powers law based on the lessons learned this past year. The legislative branch is co-equal, and the law needs to reflect that.