Governor Jay Inslee will finally get his chance to impersonate the person he has been obsessed with for years as he fires thousands of state workers, despite them receiving medical/religious exemptions from his vaccine mandate.

Governor Jay Inslee’s office says the governor expects to fire most of the 1,700 state employees who received either medical or religious exemptions in receiving the COVID vaccine due to the state not finding them a position where they do not interact with the public. Current data reveals only 68% of state employees have been vaccinated. That figure lags behind the rest of the state’s population, which the state had reached the previously coveted 70% vaccination mark back in early June (according to the Biden White House). State employees have until next Monday to receive their second vaccination shot or risk firing on October 18th. (KING5 News and White House tweet)

The Washington Policy Center provides instructions on opting out of the mandated state payroll tax the Democrats have imposed on Washington State residents to fund a poorly crafted, state-operated long-term care insurance plan.  Washington residents have found that it is nearly impossible to obtain a private long-term-care insurance plan. Multiple reports have highlighted the state is unprepared to process the applications (starting this Friday) of those who plan to “opt-out.” Yet despite these serious concerns, Democrat state officials have shown no sign to either fix the hastily written plan by calling a special session of the legislature or delaying its January 1st implementation so that the legislature can fix it during the 2022 regular session. (Washington Policy Center)

Homicides increased 46% in Washington State during 2020, just as state Democrat lawmakers imposed their “police reform” laws, making it far easier to be a criminal in the state.  While most states saw an increase in murder during the pandemic, Washington State outpaced others by 21%.  We can expect that number to increase as criminals have become well-aware of the severe restrictions that have been placed on law enforcement as they seek to apprehend suspects. Thus far, the authors of the police reform legislation, Representative Roger Goodman (D – Kirkland) and Representative Jesse Johnson (D – Federal Way), have yet to admit that their poorly crafted laws need to be corrected. (Seattle Times)

Finally, a few members of the region’s Democrat establishment are acting responsibly by speaking out against the extremists who have taken over their party’s agenda. In doing so, they have announced their support for moderate Ann Davison over radical “abolitionist” Nicole Thomas Kennedy in the Seattle City Attorney contest.  Since Christine Gregoire and Gary Locke no longer need to appease the extremist within their party, the former Washington State governors are willing to speak publicly about the dangers of the far Left.  Gregoire says she cannot tolerate Thomas-Kennedy’s views since she “believes in anarchy, that personal property destruction is a moral imperative, that all police are serial killers, that the United States Supreme Court is illegitimate, and she hates our country.”

While it is good to see former Governor Gregoire speak out against the radicals within her party, it is incredible how extreme a liberal needs to be before ANY Democrat is willing to condemn their actions.  It is also shocking that no current elected Democrat is willing to criticize the extremists within their party. Last year, we saw this when liberal extremists illegally took over portions of Seattle and elected Democrats refused to condemn their activities (in fact, legislative Democrats REWARDED THE RIOTERS by hastily passing their extreme demands for police reform, which has had disastrous results).  Governor Jay Inslee was given his chance during a press event to express his views on the violent actions of the extremist, and he chose instead to pretend he had never heard about the CHAZ/CHOP, which was a major national news story.  While Seattle police officers were repeatedly assaulted and were the targets of a mass murder attempt by the liberal extremists, the state’s top law enforcement officer Attorney General Bob Ferguson, refused to support the officers publicly. (Brandi Kruse Twitter, Rebecca Perry Twitter, Seattle Times, Shift, KING5 News, and KOMO News)

Former Seattle Police Chief Carmen Best says that it is shocking that those on the city council who pushed to defund the Seattle Police Department, still a year later, don’t have a plan to provide public safety for its 775,000 residents.  As 300 well-trained and diverse police officers have left the department and crime rates continue to skyrocket, Best said in a video interview that she believes “we are still in the same circumstances we were before with no true plan on how we are going to address homelessness, addiction, and public safety. We are doing this as violent crime is on the rise, and we are losing police officers.” (ChangeWA video interview)

The city council approved an agreement between Bellingham Mayor Seth Fleetwood and Bellingham Municipal Court Presiding Judge Debra Lev and ended months of lawsuits and investigations between the two branches of government.  The disagreement began when numerous court employees complained about work conditions, and the mayor investigated the complaints. As presiding officer of the court, Judge Lev stated this was an infringement on the separation of powers. Lawsuits were filed, and an investigation by the Washington State Supreme Court began.  The settlement between Mayor Fleetwood and Judge Lev states that the agreement “ensures that the co-equal branches of City government will respect the independence and legal responsibilities of each other.” It also has the city paying for the lawyers hired by Judge Lev and for the supreme court’s investigation.  Or in a nutshell, Judge Lev won the dispute over whether the mayor can investigate and act on municipal court matters. (Bellingham Herald)

Record requests from the public have been increasing in recent years, and some government entities have struggled to provide the staff resources needed to fulfill the demands.  A City of Gig Harbor measure limits the public records officer to spend no more than eight hours a week completing the requests. (Gig Harbor proposed ordinance)

Volunteers will be gathering this Saturday morning at Anderson Park (7802 168th Avenue NE) in downtown Redmond to doorbell in support of Kathy Lambert’s King County Council campaign.  Lambert has built a positive reputation for being one of the region’s most knowledgeable and hardest working public servants.  But most of all, she is one of the few remaining rational voices at the county as the liberal establishment attempts to impose its failed radical Seattle policies on the rest of the region. You can learn more about Kathy by reading her Shift Newsmaker Interview conducted earlier this year. Volunteers will gather at 10:30 for quick training and obtaining materials.  Food and beverages will be provided. Please email [email protected] to sign up for this event or to learn more. (Kathy Lambert Campaign and Shift)

The Confederated Tribes of the Colville Reservation have received final approval from the federal government to accept bets on sports contests. Many other tribal casinos around the state have already begun to take advantage of the lucrative monopoly on sports betting, which was handed to them by the Democrat Legislature during the 2020 legislative session.  There continue to be rumors that non-tribal gambling establishments, which were left out of legislation, plan to file an initiative to reverse the Democrats’ discrimination when they determined that only tribal businesses were worthy enough to participate in sports betting. (Wenatchee World)

The Benton County Commissioners have selected former Jail Commander Tom Croskrey to become the county’s new sheriff.  Croskrey was chosen over two other finalists and will finish out the term of Sheriff Jerry Hatcher, who voters overwhelmingly recalled in the August primary elections. Croskrey will officially begin serving on Monday. (KEPR-TV)

If Washington State is still in such an “emergency” crisis that Governor Jay Inslee needs to essentially eliminate the legislative branch and ignore local health officials so that he can make all major pandemic-related decisions, then shouldn’t we expect ALL state officials to at least appear to be working hard to solve the crisis?  In a weekend Twitter exchange Shift had with Superintendent of Public Instruction Chris Reykdal and Representative Mike Chapman (D – Port Angeles), we inquired why the SPI was busy tweeting out the TV schedule of major sporting events occurring on Sunday. While we don’t blame SPI Reykdal for being a sports fan, we are confident that a majority of Washington residents are hoping that the head of the Washington State school system is more focused on the many significant issues facing our students, teachers, administrators, and parents, than what game he’s watching on TV. (Click to read full Shift Article) 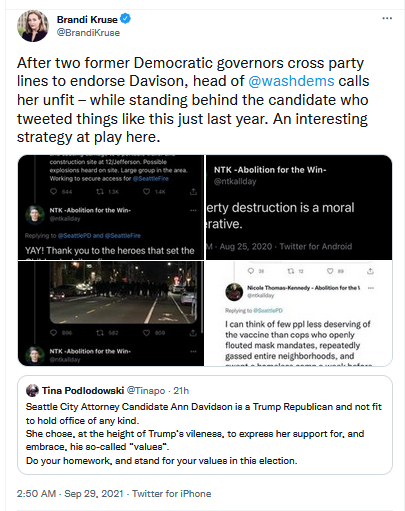 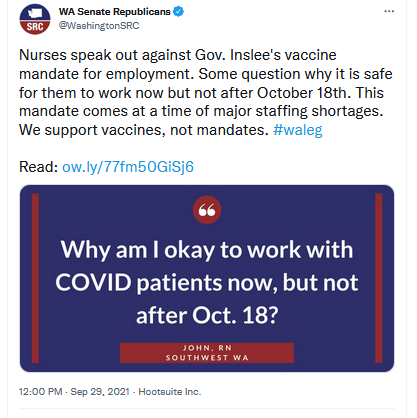 Did you find this informative?