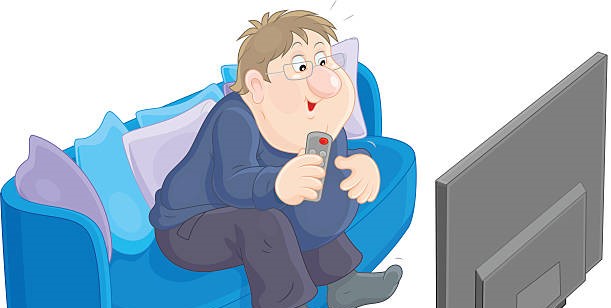 Those of us at Shift will occasionally scroll through our Twitter feed and like liberal journalists, we will post (sometimes snarky) comments on some hypocrisy or misguided statement by one of state’s many Democrat elected officials.

Washington State Superintendent of Public Instruction Chris Reykdal often post tweets that are worth commenting on.  Readers will recall the infamous tweet Superintendent Reykdal posted on election night 2019, when it became obvious that I-976 (yet another car tabs initiative) was going to pass.

Reykdal’s petty tweet response (which he quickly deleted, but not before we screen grabbed it) was for Democrats to punish counties which supported the measure by removing state funding of future transportation projects in those counties.  Which, if you look at the I-976 voting results map, would have meant that citizens in all of Washington’s 39 counties would have been required to pay the various taxes which fund the state’s transportation budget, but only the six counties which voted against the measure (Island, Jefferson, King, San Juan, Thurston, and Whatcom) would have their transportation projects funded by the state. This is not exactly the kind of level-headed thinking we should expect from the elected officials responsible for spending taxpayer funds.

Last Saturday morning, we came across this tweet from Mr. Reykdal, who as the state’s Superintendent of Public Instruction is supposed to be the leading voice on public education in our state, in which he basically retyped the TV sports schedule. 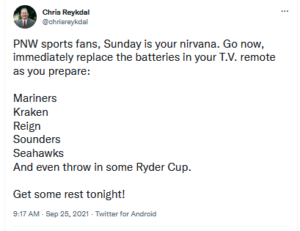 Obviously, there is nothing wrong with elected officials being sports fans (even though Reykdal failed to include the Seattle Storm’s playoff game in his list). It is one of the last activities in our society which often brings people of all political persuasions together.  But we found it very odd that with so many pandemic-related issues continuing to impact our state’s schools, that the one person most responsible for our schools should at least provide the appearance of focusing on solving them.  So we posted this reply. 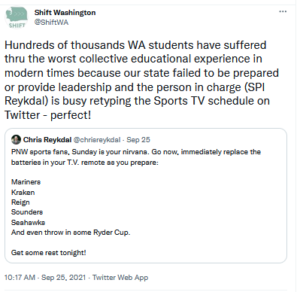 Clearly, Shift’s perspective about the lack of effort by a Democrat official struck a nerve, as our reply drew a response from Democrat State Representative Mike Chapman (D – Port Angeles).  The thing is, unlike some of his wackier colleagues, we respect Representative Chapman.  He is a Democrat known to work across the partisan aisle with Republicans on several issues.  He lives outside the narrow-minded liberal echo chamber of Seattle, which isolates so many of his far-Left colleagues from reality.

Representative Chapman makes a worthwhile point about Shift’s reply, in which he asserts that public officials should be able to relax and enjoy sports and he criticized us for being petty and partisan. 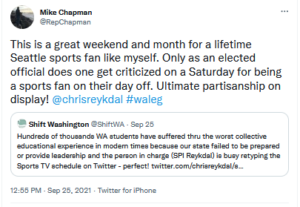 We might normally agree with Representative Chapman, though after all our issue was with one particular lackluster Democrat.  Yet, as we responded to him, if the state is in such a dire emergency that our governor has taken the unprecedented action of eliminating the legislative branch from our state government for closing in on 600 days and has issued multiple health orders without consulting local health officials, then shouldn’t state residents be expecting ALL state officials to be working hard to solve the problems? 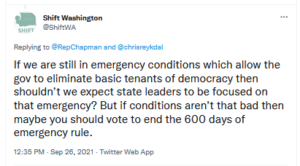 (And yes to those of you who are members of the “spelling police,” we know we used the word “tenants” in the tweet when we should have used “tenets.”)

This is especially true with our state’s education system which, along with the state’s hospitality and medical communities, has been most impacted by the COVID pandemic.  There are many important education issues we want our state leaders to be working to solve. Public school enrollment has significantly declined (which will seriously impact many school districts’ budgets), Governor Inslee’s vaccine mandate for all state employees could result in the loss of many teachers and school administrators, and most of all, state officials need to figure out how to make up for the subpar education Washington State students have received for the past 20 months.  We are hoping our state leaders are focused on these serious challenges.

And, as we tweeted to Representative Chapman, if we are not in such a dire emergency, then shouldn’t he and his fellow Democrat legislators join Republican legislators to end the one-man rule of Governor Inslee?  If Jay Inslee is unable to resolve the “emergency” (or as the governor mistakenly claimed in early July, “Win the Super Bowl”) after 20 months, then maybe lawmakers should return the legislative branch to its constitutional role of passing laws and providing the appropriate checks and balances on the executive branch.

We have not heard back from Representative Chapman on his perspective, but we’ll keep you posted.