With nearly all of Seattle City Attorney candidate Nicole Thomas-Kennedy’s extreme tweets in one place, voters can easily read for themselves how incredibly extreme and violent she is.

The Democrats are seemingly pursuing a disturbing redistricting strategy aimed at the unprecedented result of letting the liberal Washington State Supreme Court determine the boundaries of the state’s 49 legislative and 10 congressional districts for the next decade.  In a Crosscut article (which, as usual for the Seattle-focused website, relies almost entirely on the Democrat quotes and opinions), prominent Democrat attorney and UW Professor Hugh Spitzer is quoted as saying the two Democrat redistricting commissioners have an incentive to not do their jobs and reach an agreement with the Republican commissioners – a failure rejected by all previous redistricting officials.  By state law, if the commission fails to reach an agreement by the November 15th deadline, then the Washington State Supreme Court – which is comprised entirely of liberal judges, the majority of whom  were handpicked by Democrat governors — will set new boundaries which will undoubtedly benefit their liberal politicians who put those judges on the bench.

The Redistricting Commission is holding virtual meetings tonight (Tuesday) and on Saturday morning (October 9th) where members of the public can provide comments on the draft legislative and congressional maps presented by each of the four commissioners.  Republican Commissioners Graves and Fain presented maps which sought to increase the number of competitive (i.e. “swing”) districts, while the Democrat Commissioners Sims and Walkinshaw have delivered maps which seek to protect the incumbent office holders, especially liberal lawmakers in districts outside of Seattle where far-Left activism may not be quite as popular.  To sign up for tonight’s meeting, please click here.  There are several methods to provide your thoughts on the maps to the commissioners, please clink on this link to learn more. (Crosscut, Redistricting Commission meeting notice, Proposed State Legislative maps, Proposed Federal Congressional District Maps, and Public Comment methods)

Even the liberal bureaucrats who run Governor Jay Inslee’s Department of Commerce (DOC) continue to admit that not having a state income tax is a major incentive for prospective employers to operate their businesses in Washington State.  On the “Choose Washington” website, used by the state to educate potential employers about opportunities here, commerce staffers have created a page to dispel rumors about the state.  The #1 rumor is that Washington State has high taxes.  The DOC asserts, “As a business, entrepreneur or investor, you should know that Washington doesn’t have a personal or corporate income tax.”  This is odd, since earlier this year the DOC had scrubbed similar language from the site just as Democrat legislators were voting to impose a state income tax on capital gains (SB 5096).  This new law is now being contested in an historic lawsuit taking place in Douglas County Superior Court.  By promoting that the state has no income tax, while at the same time pushing to impose a state income tax, the Democrats are clearly attempting to “have their cake and eat it too.”  (Department of Commerce website, Washington Policy Center, Washington Legislature Bill Summary, and Seattle Times)

Respected Senate Republican Caucus Chair Ann Rivers (R – La Center) announced her resignation from the Washington State Legislature, in order to become the community development director for the City of Longview.  Senator Rivers has held her current position since June 2012, when replaced the retiring Senator Joseph Zarelli. Previously, Senator Rivers had served most of her first term as a member of the House of Representatives before her Senate appointment.  Currently the 18th Legislative District contains suburban portions of Clark County. Republican precinct committee officers will select three nominees for the Clark County Commissioners to select a replacement from. The chosen individual will need to run for election in 2022. (Vancouver Columbian and Shift Newsmaker interview)

A website and connecting Twitter feed have been created featuring the hate-filled radical Twitter comments of Seattle City Attorney candidate Nicole Thomas-Kennedy.  The candidate scurried to cover her hatred by deleting many of the tweets, but there had been several different sources who had previously highlighted several of the misguided tweets of Ms. Thomas-Kennedy (who egotistically likes to call herself “NTK”, evidently copying national leftists like AOC).  This website pulls them all together in one place and breaks them down into different categories.   Last week, NTK attempted to defend her hate-filled and violence-supporting tweets by providing the incredibly laughable defense that they were meant as “satire and sarcasm.”

As one reads through NTK’s hate-filled posts (such as calling someone “a hero” for placing an exploding device in the East Precinct building, saying police should “Eat some Covid laced sh*t,” and that “Property destruction is a moral imperative”) remember that Washington State Democrat Party Chair Tina Podlodowski posted a tweet in support of NTK’s candidacy just last week.   Just hours after two former Democrat governors (Christine Gregoire and Gary Locke) stated they could not “tolerate” NTK’s radical views and announced their support for her opponent Ann Davison, Chair Podlodowski sent out a tweet attacking Ms. Davison.

In the tweet Podlodowski asserts, “Do your homework, and stand for your values in this election.”    If Podlodowski followed her own advice and did her homework, then she knew of all NTK’s violent tweets, and the Democrat State Chair still supports her candidacy. So, evidently the current Democrat Party values include police hatred, violence, and property crime.  (NTK Facts,  NTK’s Deleted Tweets Twitter Account, MyNorthwest, Tina Podlodowski Twitter, and Brandi Kruse Twitter)

A 36-year-old Tacoma resident was sentenced to two years in prison for his failed arson attempt outside Seattle Police Department’s East Precinct in June 2020.   This was an earlier arson attempt on the precinct than the one a couple of months later when rioters also attempted to lock police personnel in the building in a mass murder attempt.  Yet in both cases, Governor Jay Inslee, Attorney General Bob Ferguson and all elected Democrat officials have refused to condemn the violence committed by the liberal activists. (MyNorthwest and KOMO News)

Washington State’s Democrat elected officials, including the evidentially not so powerful Governor Inslee, have yet to convince their fellow Democrats in the Biden White House to provide an exemption to allow Canadians to travel to Point Roberts.  The small U.S. community is below the 49th parallel, but is connected by land only to British Columbia. The U.S citizens there have faced severe economic struggles since the hundreds of Canadians who have summer homes in the community have been prohibited from travelling across the border during the pandemic. The Biden administration is allowing Canadians to enter the U.S. by plane, but not by car, because evidently COVID doesn’t know how to fly as long as you wear a mask the entire flight.  For a few months, Governor Inslee has said he has been working to encourage the Biden Administration to make an exception, thus far his pleas have been ignored. (Spokesman Review)

Rocks again are being thrown at cars driving along I-5 in Seattle.  During the summer, there were dozens of incidents where debris was thrown at cars from homeless encampments near the intersection of I-5 and I-90.  These incidents appeared to stop once the City of Seattle finally listened to the outrage from drivers and removed an encampment and made an arrest of a suspect.  This latest incident occurred over the weekend further South on I-5, where there are more encampments. Should we start a countdown on how many drivers have to be assaulted with rocks before the state/city finally acts to protect drivers? (Safe Seattle Facebook Post)

A Cayote Ridge Corrections Center prison guard has filed a lawsuit against Governor Inslee over his vaccine mandate. Guard Jeffrey Johnson said that he filed for an exemption due to religious reasons and he has been told he will need to be reassigned to an undetermined position. The suit contends that Johnson is faced with financial uncertainty due to the reassignment. Like nearly every single state-run facility, state personnel at the Cayote Ridge facility failed to use proper safety and health guidelines during the pandemic, which resulted in nearly 750 inmates and state employees (but not Mr. Johnson) being infected with COVID-19. (iFIBER One)

Some good news, as there were less acres burned this year than in previous years, despite it being one of the hottest summers in recent years in Eastern Washington.   During the Summer of 2020, 1.8 million acres were hit by wildfires, while there was a 22% reduction in acres burned in 2021, with 1.4 million acres catching fire.  While analysis of the 2021 fires is ongoing, there are many who believe that some of the reduction was due to the state government finally adhering to forest management practices which conservatives have promoted for many years. (KHQ – Q6)

Liberal state lawmakers refuse to admit their public safety failures and instead tell police departments that officers need to put themselves at increased legal risk to keep the public safe.  Two of the more extreme members of the Washington State Senate Democrat caucus, Manka Dhingra (D – Kirkland) and Jamie Pedersen (D – Capitol Hill), issued a media release after the Democrats’ radical “reform” laws went into effect, stating, “Police have a responsibility to show up and help people in crisis.”  Apparently the two Democrat senators did not know the contents of one measure (HB 1310) of their police “reform” package, which they wrote and passed so quickly to appease the violent liberal rioters they count among their base.  The new laws actually severely restricts the calls police can respond to, including those involving someone suffering a mental health crisis, as multiple law enforcement agencies across the state have pointed out. (Click to read full Shift Article) 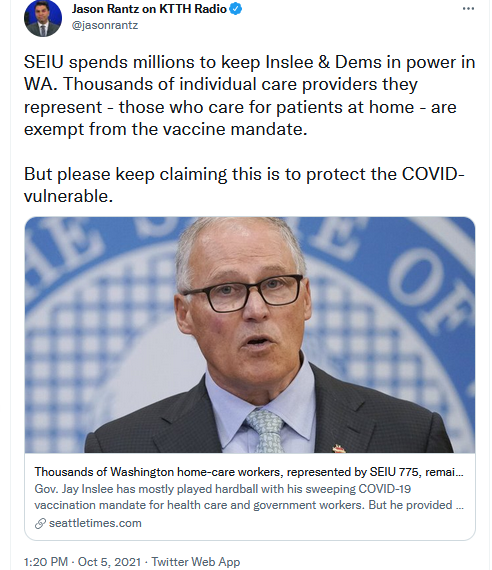 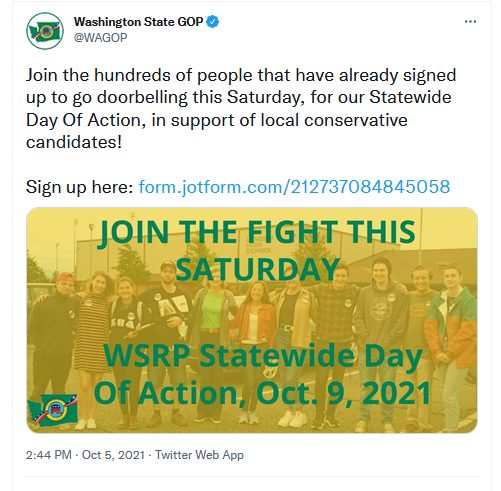