From all of us at Shift, we want to wish our readers a joyous holiday season and hope you are able to safely spend some time with your loved ones

This will be the last “regular” edition of the Daily Briefing for this year, though we are planning to send out a special edition or two next week to give you something to read over our break.  It has certainly been a unique year for all of us to cover, and we thank all of you for your loyal support.  Stay safe, and we look forward to enjoying a much better 2021 with you all!

Shift’s final Newsmaker Interview for 2020 is with Representative-elect Peter Abbarno (R – Centralia). Abbarno easily won (by more than 40%!) the 20th Legislative District seat vacated by the retirement of former House Minority Leader Richard DeBolt, and many people predict he will be a rising star in Olympia.  Long-time activists will remember Abbarno from his days as the political director for the Washington State Republican Party, before he went on to obtain his law degree from Vermont Law School in 2008.  Peter came back to Washington State and started practicing law in Centralia.  In 2015, Abbarno was elected to the Centralia City Council.  In his Newsmaker Interview, Abbarno shares his thoughts on the upcoming legislative session, Governor Inslee’s income tax on capital gains and Low Carbon Fuel Standard proposals, his legislative priorities, and (his favorite NFL team) the Buffalo Bills. (Shift’s Newsmaker Interview) 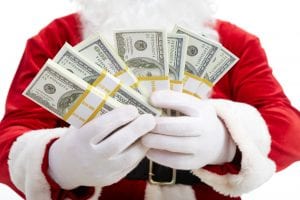 Merry Christmas from the Democrats – and if taxes were gifts, Jay Inslee would want to give them to everyone.  Inslee and the Democrats appear tone-deaf to the economic crisis by proposing an income tax on capital gains, health insurance hikes, and other taxes and fees.  They are doing this despite a massive increase in state spending since Inslee has been in office (the state budget has nearly doubled in the past ten years). The Democrats are also pushing a Low Carbon Fuel Standard that studies have shown could increase the cost of gas by 46 to 63 cents a gallon (and will hit low-income workers the hardest).  Inslee and the Democrat just cannot help themselves in making it more expensive for us to live in Washington State. (Shift Article)

As we look forward to the new year, and the start of a COVID-focused legislative session (that should have occurred 6 months ago), Governor Inslee continues to push his false claim that Republicans have not come up with ideas on how the state should be governed differently than his one-man rule. The truth is, Republican lawmakers sent dozens of letters to the governor over the last 8 months, proposing different ideas on how to manage the crisis, but Governor Inslee almost never responded to them.  While the governor had taxpayer-funded news conferences two or three times a week (which were basically hour-long campaign commercials, as Inslee spent his time bashing the Trump Administration and praising himself and fellow Democrats), Republican legislators were restricted by campaign-year restrictions which banned them from using their official websites and  emails to promote their proposals.  Back in May, Shift heard about the letters to the governor and obtained 19 of them from Republican state senators through a public records request.  The House Republican Caucus  posted on its website (now that it can be used again) many letters which House members sent the governor (which have nearly all been ignored).  Inslee’s claim that Republicans have not come up with ideas on how to handle the pandemic crisis, or on how to fix his broken state budget, are simply more false arguments being peddled by Inslee to deflect attention from his autocratic rule of the state. (House Republican Caucus and Shift Article)

While Governor Inslee and the Washington State Democrat Party pushed conspiracy claims that conservatives were behind the threatening messages sent to elections officials (including in Washington State), the FBI has determined the messages were part of a plot emanating from Iran.  The threatening messages are part of an Iranian strategy to disrupt American elections, which also included sending hostile emails to Democrat voters which appeared to come from conservative American organizations. We should again note that while Inslee and the Democrats were quick to condemn violent threats they believe (and now proven false) to have come from the Right, they have yet to condemn the actual violence committed by liberal activists against Seattle businesses and police officers. (Washington Post)

Representative Andrew Barkis (R – Olympia) says Governor Inslee should not break promises made to Washington citizens by taking away approved funding for road projects, just so he can steal it to pay for more of his failed “green” projects.  Inslee’s budget proposal would take money away from road projects that were negotiated in 2015, to instead pay for his high-speed rail scheme, and electrifying buses and ferries.  Rep. Barkis is the Ranking Minority member of the House Transportation Committee. (Gorge News Center)

A Seattle Times editorial strongly supports a lawsuit against the City of Seattle’s job-killing employer tax.  The editorial states, “Combined with Seattle’s already high business taxes and fees, and the City Council’s stubborn indifference to public safety problems and rampant property crime, this creates another incentive for companies to employ fewer people in Seattle — or worse, leave the city altogether.” The Times also correctly points out that the tax will also hurt “lower wage workers — if upper-end jobs diminish, the impact will be felt by restaurant, retail and service-sector jobs.”  The editorial concludes, “Now is the time for City Hall to support employers so the city can recover and again be a great place to start careers and companies.”  We should note, several people have begun to label the new tax the “Mosqueda Tax” in honor of at-large city councilmember Teresa Mosqueda, who proposed the plan and is preparing to run for mayor next year.  (Seattle Times and ChangeWA email)

After more than six months of being controlled by Left -wing activists and a homeless encampment, Cal Anderson Park has finally been reopened to the general public.  The Seattle Parks and Recreation Department made it official today after three separate sweeps of the park, and work crews removed more than 100 tons of garbage left behind by the liberal activists and the encampment.  Crews continue to repair damage done to the park.    (MyNorthwest)

The owners of Spiffy’s, the Chehalis restaurant that is defying Governor Inslee’s orders against indoor dining, has vowed to continue to stay open and fight “for our constitutional rights” despite daily fines being imposed by the state.  So far, the Washington State Department of Labor & Industries has fined Spiffy’s nearly $150,000 for serving customers inside its diner after Governor Inslee prohibited indoor dining on November 18th.  The state has filed a cease-and-desist order against the establishment, which could result in jail time if not followed.  The next court hearing will take place on December 29th. (The Olympian)

An internal Boeing memo states that the company is moving faster to consolidate 787 production jobs to South Carolina. Originally the timeline was set for “mid-2021”, but the memo reveals that March is now the target date.  The memo also states that the company continues to figure out employment details for those who work at the Everett facility. (Seattle Times)

Central Washington Congressman Dan Newhouse (R – Sunnyside) spoke about his recent battle with COVID-19, saying that for a full week he “was about as sick as I’ve ever been.”  He felt very lethargic and that the 102-degree fever lasted about a week. The congressman said he had been extremely careful in following all the health guidelines, and that he isn’t certain where he caught the virus, but it may have been from the air travel flying back to Washington, D.C.  Newhouse’s advice for everyone is “to take it seriously and do all you can to protect yourself and others.” (Walla Walla Union Bulletin/Spokesman-Review)

In a Tri-City Herald op-ed, Washington Policy Center’s Todd Myers states that the ban on plastic bags is a clear example of elected officials enacting bad public policy because they listened to emotional pleas instead of following scientific data.  Research has found that cotton reusable bags create more air and water pollution and create more environmental damage than plastic bags.  Yet pictures of a turtle tangled in a plastic bag determines environmental policy for many Democrats more than scientific data.  Myers points out that during the COVID-19 pandemic, Governor Inslee refused to budge on the plastic bag ban until just recently (when he simply suspended it for one month), despite the health benefits of retailers being able to use the bags. Myers points out that for eight months, “Washington State has locked down the economy, causing thousands of businesses to go bankrupt, an increase in unemployment rates, and permanent harm to school students. Those costs were acceptable. Simply postponing – not repealing – the ban on plastic bags was not.” (Tri-City Herald)