After the bosses in government employee unions again bankrolled Inslee’s re-election campaign, the governor returns the favor and gives them their third pay raise in three years.

If Washington State is still in such an “emergency” crisis that Governor Jay Inslee needs to essentially eliminate the legislative branch and ignore local health officials so that he can make all major pandemic-related decisions, then shouldn’t we expect ALL state officials to at least appear to be working hard to solve the crisis?  In a weekend Twitter exchange Shift had with Superintendent of Public Instruction Chris Reykdal and Representative Mike Chapman (D – Port Angeles) we inquired why the SPI was busy tweeting out the TV schedule of major sporting events occurring on Sunday. While we don’t blame SPI Reykdal for being a sports fan, we are certain that a majority of Washington residents are hoping that the head of the Washington State school system is more focused on the many major issues facing our students, teachers, administrators, and parents, than in what game he’s watching on TV. (Click to read full Shift Article)

Governor Jay Inslee has again rewarded his major campaign contributors in the government employee unions, this time taking money from taxpayers to give the unions a proposed 3.25% pay raise in 2022, their third increase in three years. It is a heck of a racket the unions and Democrat politicians have worked out.  The unions give Democrats large campaign contributions (both directly to the candidates and through not-so “independent expenditures” funded by unions through Democrat campaign consultants). Once elected, these Democrat politicians then hold secret negotiations in which the politicians reward the union leaders for their strong campaign support by giving their members pay raises and extremely generous benefits which the taxpayers fund, and which in turns give the unions more dues money to give to Democrat politicians.  This latest pay raise will be the third salary increase in three years for state employees.

As always, the governor has made sure to take care of government employees first with the nearly $1 billion in additional revenue which the state is now expecting in the current budget cycle.  It is too bad Governor Inslee did not think of those in the hospitality industry who have suffered greatly, perhaps by reducing the state tax on hotels, restaurants, and bars.  Or the governor could have thought of ALL Washington residents by reducing the sales tax.  But as we have seen throughout the pandemic, the governor constantly proves that the needs of state workers are more important than the needs of regular hard-working residents who pay their salaries. (Washington Federation of State Employees announcement of tentative agreement, Economic and Revenue Forecast Council, Washington Policy Center video, and Shift)

The latest report from the Washington State Office of Financial Management (OFM) reveals that just 68% of state workers are currently vaccinated against COVID.  At least this is an increase from just two weeks ago, when only 49% were vaccinated – this among those people who get a paycheck from “Emergency Orders” Inslee!  State workers, contractors, and volunteers, only have until October 4th to be vaccinated, or risk being fired from their position on October 18th.

Yet these figures raise many interesting points.  Remember in July, when the always divisive Governor Inslee went off on a rant targeting Trump voters for being “bioreactor facilities” because they were not receiving the vaccine and thus were responsible for spreading the virus?  At that time, well over 75% of eligible Washington State residents had been vaccinated.  Yet, if the data from OFM is correct and only 49% of state workers were vaccinated in early September, chances are that far fewer than that were vaccinated back when the governor went on his partisan rant.  Since government workers are notorious Democrat voters, weren’t they just as much “at fault” as the “Trump voters” Governor Inslee was attacking?

This is yet another example of the poor leadership shown by Governor Inslee during the pandemic.  At every opportunity he has had to unite Washington State residents during this health crisis, he has chosen instead to be divisive and make partisan attacks.  It is easy to imagine that previous governors, such as Republican Dan Evans or Democrat Booth Gardner, would have approached the pandemic in a far more unifying and inclusive manner.

If Governor Inslee had chosen to lead is this manner, then there likely there would not be such a large segment of the state’s population today distrusting the governor’s legitimate health orders regarding facemasks and vaccination. And maybe more of the people who work for him in the state government would be listening to what he says. (Washington State Office of Financial Management vaccination report and MyNorthwest)

Washington State parents are “voting with their feet” as students are leaving traditional public schools and enrolling in charter schools.  A report by the National Alliance for Public Charter Schools reveals that 4.2% of Washington State students have moved on, first due to the failure of public schools to be prepared for remote learning and then because of the reluctance of the teachers’ unions to bring students back to in-person classes. At the same time, there has been a 17.4% increase in the number of students enrolled in charter schools. Other education options such as private schools and online academies have also increased enrollment due to the problems faced by Washington State’s public schools. (Opportunity Washington)

The four voting members of the Washington State Redistricting Commission released their initial proposed boundaries for Congressional Districts this afternoon.  While we have not had time to take a serious look at the vote patterns for each of the proposed maps, at quick glance it appears that each of the commissioners had the same goal with congressional districts as they did with their proposed legislative district boundaries revealed last week.  The GOP Commissioners (Graves and Fain) seek to make the districts more competitive, to give more voters more choices, while the Democrat Commissioners (Sims and Walkinshaw) are seeking to make districts safer for current liberal incumbents. (Click on Commissioners’ name to view their proposed congressional maps.)  (Washington State Redistricting Commission)

We all saw this coming: A spokesperson for an association which represents Seattle property owners expressed serious concerns about the radical actions being taken by the Seattle City Council.  Brett Waller with the Washington Multifamily Housing Association stated, “Everything that the city council has done, arguably, has not stabilized the housing market in the city of Seattle, it’s only made it worse.” Specifically Waller was reacting to votes taken by the council Monday.

The first measure which passed the council requires six months’ notice to tenants before raising rents, while the second measure forces landlords to pay moving expenses for any tenant who has their rent increased by more than 10%.  Waller predicts these moves will make it more difficult for renters to find units in the city, as both single-family homes and multi-family properties will be sold to buyers taking them off the over-regulated rental market. Property managers can also be expected to screen candidates more thoroughly to ensure they have a history of paying their bills before being willing to rent. (MyNorthwest)

The Tacoma Weekly agreed to pay $15,000 in fines for violating the state’s election laws by offering to sell its endorsement and provide favorable coverage for “pay-to-play” political candidates.  The fine from the Washington State Public Disclosure Commission follows a year-long investigation into flyers the newspaper sent to local political candidates. It violates Washington State election laws for newspapers sell supportive articles and endorsements to candidates – which means the mainstream media has to give away a lot of free coverage to their liberal friends. (Crosscut)

Reports indicate that not many in attendance were wearing the mandatory facemasks at the Seattle Kraken’s first game, which was played Sunday at the Spokane Coliseum.  It was the first pre-season contest played by the new National Hockey League franchise.  With 10,000 people in attendance, it was believed to be the largest indoor crowd in the state since pandemic regulations began in March 2020. All in attendance were required to prove they had been vaccinated or agree to be tested at the door. (MyNorthwest)

Parents of Central High School (Spokane Valley) students were outraged by an assignment which required freshmen in an English class to develop and write about “the perfect murder.  After parents expressed their concerns to school administrators, the assignment was pulled, and the teacher has apologized for suggesting the topic. (KHQ TV) 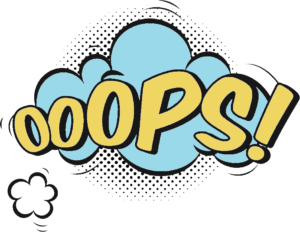 An embarrassing error made by Washington State Democrat Party Chair Tina Podlodowski highlights the differences in redistricting plans being promoted by the Republicans and Democrats.  After maps of the initial boundaries were released by each of the four redistricting commissioners (two Republicans and two Democrats) last week, the Washington State Democrat Party issued a media release in which its attached link to the Revised Code of Washington (RCW) directly contradicted Chair Podlodowski’s false argument in the release.  While the Democrats sought new legislative district boundaries which protect incumbent Democrat members (especially those outside Seattle who will face tough contests in 2022 for supporting ultra-liberal legislation), Republicans drew boundaries which sought more competitive (i.e. “swing”) districts.  Podlodowski’s statement claimed GOP commissioners were breaking the law by making more “competitive” districts.  Yet the RCW on redistricting clearly state that the commissioners’ plans must “encourage electoral competition.” Ooops!  (Click to read full Shift article) 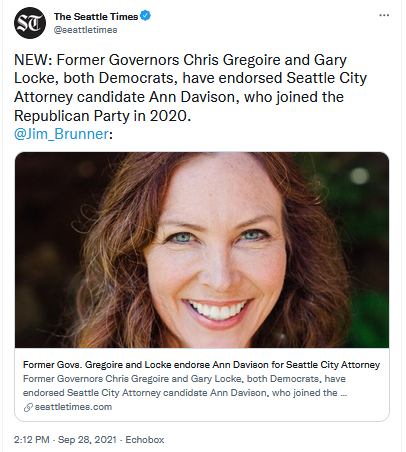 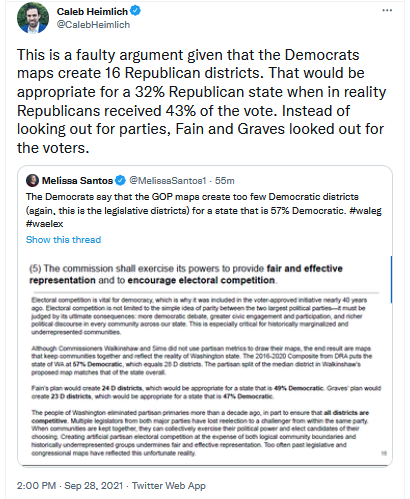