Governor Inslee allows his campaign contributors in government employee unions to benefit from the increase of state revenues, but ignores the workers in the hospitality industry and the state taxpayers.

Instead of spreading the benefit of the state’s improved revenue collections with all Washington State residents through a decrease in the sales tax, or perhaps helping those in the struggling hospitality industry by reducing taxes on restaurant/bar/hotel bills, Governor Jay Inslee has instead decided to reward his campaign contributors in the state employee unions with their third large pay raise in less than three years.   The 3.25% pay raise was “negotiated” in secret meetings held by between Governor Inslee and his long-time financial supporters in the government unions and will cost Washington State taxpayers (who were not represented in the secret “negotiations”) an additional $412 million.  Governor Inslee decided on this divisive actions because, as opposed to easing the tax demands on the general public or helping struggling restaurant, bar, and hotel workers, by giving money to state union members, he ensures that union bosses will keep sending large contributions to Democrat politicians. So, even though “negotiations” were unnecessary in the middle of an existing contract, Inslee drove the hard bargain of giving his friends more of your money. (Washington Policy Center)

Former president of the Association of Washington Business Don Brunell is critical of Governor Jay Inslee’s latest attempted end-run around the legislature to impose his expensive and inefficient ban on natural gas in new construction.  Brunell writes that since the governor failed to get the Democrat-controlled legislature to pass his anti-natural gas legislation, which would drastically increase the cost of new home and commercial construction, Inslee decide to impose new “building codes which would accomplish the same thing by fiat.” Brunell uses Washington Policy Center studies to show that banning natural gas is one of the most inefficient ways to reduce carbon.  But, as the Democrats have well proven, their environmental policies are always about virtue signaling and never about actually solving the problem.  Because if we solved the problems which liberal policies have helped drive (like homelessness, drug use, crime, climate change, racial discrimination, etc.) we wouldn’t have an excuse to grow the size and cost of government.  (Battle Ground Reflector)

The Washington State Republican Party is holding a “Statewide Day of Action” this Saturday to help conservative/moderate candidates who are running for local positions.  Under the slogan, “Don’t Let the Democrats turn your city into the next Seattle,” Republicans will be gathering at locations across the state to doorbell and sign wave for local conservative/moderate candidates.  To sign up and learn more, please register by clicking this link. (Washington State Republican Party email)

For the first time in many decades, Boeing is no longer Washington State’s largest private employer.  During the past two years, both Amazon and Microsoft have passed the airplane manufacturer in state jobs, as Boeing continues to move more of its 150,000 workers to more employer-friendly locations around the country. According to Business Journal research, Amazon now has 80,000 Washington State employees, Microsoft has 57,666, and Boeing is down to 56,908.  Boeing employed more than 100,000 Washington workers in the early 1990’s, before costly Democrat policies forced the company to move many of its manufacturing jobs to Missouri, South Carolina, and Alabama, and move its corporate headquarters from Seattle to Chicago. (Puget Sound Business Journal)

Democrats on the King County Council know that they will lose elections if voters focus is on their many failed and expensive policies, so they have resorted to their usual bag of tricks by calling a moderate councilmember a “racist.”  This PR stunt is part of their desperate attempt to eliminate dissenting opinions on the narrowminded council, and sadly, the Seattle Times gladly helped the cause by writing a sloppy story on the councilmembers’ despicable partisan actions.

The council Democrats and their liberal policies on homelessness have increased the number of those who are suffering on the streets (so their current solution is to move them into hotels in the suburbs), their anti-police actions have increased crime rates, and their expensive carbon-reduction measures have been colossal failures, meaning the liberals on the council are left to try and distract voters away from their failures. Bingo – let’s use trumped-up charges of racism against one of the few remaining voices of reason on the council, Kathy Lambert.  Councilwoman Lambert is in a tight race to retain her seat in her Northeast King County district, where she has built a strong reputation for her hard work, knowledge of the issues, and compassionate personality.

So, instead of working to repair their multiple failures, the liberal councilmembers are devoting their time to attacking a piece of Lambert’s campaign mail which portrays her opponent as a puppet of Seattle and the country’s extreme-left politicians, including Councilmember Girmay Zahilay (who defeated previous liberal Councilmember Larry Gossett by attacking him for not being radical enough).  Since Zahilay is Black, it provides the liberals with the excuse to label Lambert as racist.

We should note, as could be validated by any of the media who have known her over Lambert’s nearly 30-year career in the legislature and county council, she always been known for her warm heart and for seeking to bring people together.

Even more disappointing, and once again showing its deep liberal bias, the Seattle Times hurriedly featured a story on the matter which failed to provide any critical view of the liberal councilmembers’ actions – and even published an early preview online to alert readers that a Democrat press release would be on page 1 in the morning. This type of slanted journalism is far too common for the Times.  The newspaper has recently refused to even mention the national news story that 18 former and current staff members for far-Left Congresswoman Pramila Jayapal took the unprecedented step of going to the media to describe the “hostile workplace” environment in her office. Instead of reporting this national news story regarding its own hometown member of congress, the paper decided to keep its readers uninformed, and instead published a puff piece that failed to discuss what everyone in the nation’s capital was saying about Representative Jayapal.

Luckily for Seattle voters willing to do a little research beyond the Stranger/Fuse/Union/Democrat Party endorsement lists, most of her tweets were saved and can be found on this new website.  Radio hosts Jason Rantz is emphatic about the campaign for the city’s top legal officer.  He states, “No one should understate what is on the line if Thomas -Kennedy were to be elected. It would destroy the city for good.” (Jason Rants Show Facebook Video and NTK4Crime website)

While construction revenue in Spokane County is breaking records, contractors state the figures are deceptive and that they are still not close to meeting the demands for new homes.  Some $1.34 billion was spent on home and commercial construction in Spokane County during the reporting year ending July 31st.  This shattered the previous record of $1.08 billion spent in 2007. Yet contractors warn that this record was mostly due to increased land, labor, and lumber costs, and that the county still has an extreme shortage of housing units.  One contractor stated, “If we were keeping up with market demand, that number ($1.34 billion) would be triple what it is.”  (Spokesman Review)

The campaign for Seattle City Attorney reveals there is a growing division within the Washington State Democrat Party, and we can fully expect current “leading” Democrat elected officials to hide from taking a stand.  While two former Democrat governors (Gary Locke and Christine Gregoire) came out in support of moderate candidate Ann Davison for Seattle City Attorney, Washington State Democrat Party Chair Tina Podlodowski posted a supportive tweet for the far more radical Nicole Thomas-Kennedy.  Other party activists slammed the two former governors as out of touch for not supporting the most left-wing candidate for this non-partisan public safety post.

We can fully expect Governor Jay Inslee, Attorney General Bob Ferguson, King County Executive Dow Constantine, and Lands Commissioner Hilary Franz to repeat their performance from 2020, when they all performed disappearing acts instead of taking a stand to either support or condemn the violent acts (including a mass murder attempt against Seattle police personnel) being committed by left-wing activists. We can safely assume that the state’s top Democrat political leaders/governor wannabes will again hide and refuse to either support or condemn the actions of their party’s leaders who support the radical and violent views of Thomas-Kennedy.  (Click to read full Shift Article) 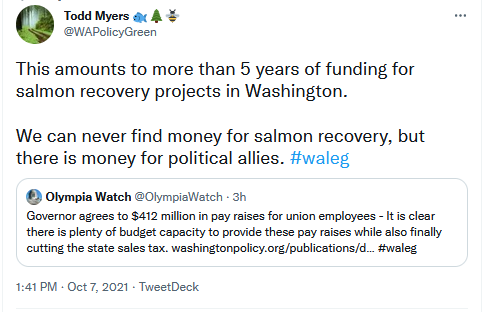 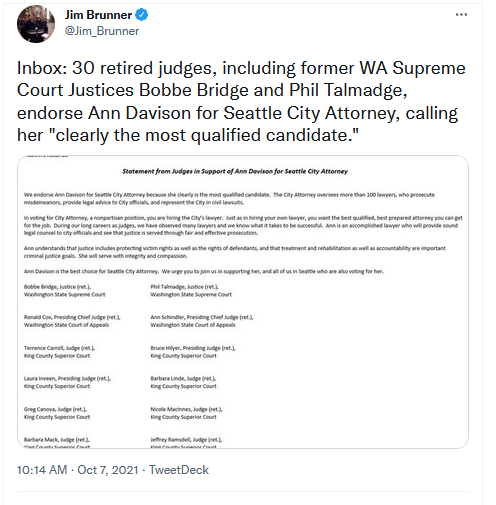 Did you find what you read interesting?