We encourage our readers to help our neighbors in the food-service industry (who were again devastated by Governor Inslee’s orders) by ordering take out or delivery from local restaurants.

The Washington Education Association spent millions of dollars attempting to buy the 2020 elections.  As Shift’s article states, “For the Washington Education Association, it’s not about our children’s education; after all, kids do not pay union dues. It’s about more money for the union and more money for their Democrat friends in office who can keep the gravy train running the WEA’s way.” (Shift Article)

Criticism continues for Governor Inslee’s recent – and hasty – decision to shut down businesses, especially in light of his failure to offer a plan to help these employers financially.  House Republican Leader JT Wilcox said, “If we can restrict businesses on a couple of days’ notice, we ought to be able to create a plan to help them through the rest of the year in the same amount of time. I was deeply disappointed that the governor brought these restrictions without a plan to help the businesses that are going to be affected.”  In contrast to the Inslee Administration, Republican lawmakers have already developed strategies to assist employers.  These strategies include B&O and property tax breaks, dipping into the state’s rainy-day fund to expand state grants, postponing hikes in employers’ unemployment insurance rates, and delaying state liquor license renewals. (Q13 News on Facebook)

Oregon’s Democrat Speaker of the House is calling for a special legislative session to alleviate the damage caused by the state’s recent restrictions on employers.  In sharp contrast to Washington State’s Democrat legislative leadership, Speaker Tina Kotek called on the Oregon governor to declare a catastrophic disaster and convene the legislature in December. Kotek said, “We need to utilize some portion of the state’s reserves as soon as possible to help struggling Oregonians and businesses through the winter months.” (Jeff Mapes Twitter)

After his re-election, Governor Inslee’s first meeting was with the president and chief lobbyist for the Washington Education Association (WEA).  The governor’s calendar included the note, “WEA requested the meeting to thank the Governor,” along with the scheduled phone meeting. The schedule did not reveal what the WEA was thanking the governor for, but it was likely for catering to the powerful union’s every demand. Of course, in return, the WEA will continue to pour its dues money into Democrat campaigns and liberal organizations.  In keeping with Inslee’s history of working very few hours (despite being the sixth highest paid governor in the country), this was the only external meeting the governor had on his schedule on November 4th (likely to allow the governor time to update his resume for a Biden Administration interview). (Washington Observer and The Ladders)

Four landlords are suing Governor Inslee and the State of Washington over the never-ending eviction ban that is causing hardships for many property owners.  One of the landlords, said that he initially supported the ban when he thought it would last only a couple of months.  Yet, since it has been extended to the end of the year and will likely continue into 2021, he is not sure if he can stay financially solvent and is considering selling his properties. “Who’s going to buy it?” he asks. “Because if it’s got a tenant that’s not paying rent and you know you’re not gonna be able to get that tenant out, nobody in their right mind is going to buy that rental property.” (MyNorthwest)

The Pierce County Council has increased bill reimbursements to restaurants as part of its Pierce County Restaurant Rally.  Previously, customers at participating eateries received a 30% discount on their bill, and the county reimbursed the restaurants 50% of the tab (thus netting the restaurant an additional 20% of the bill).  But after Governor Inslee suddenly prohibited indoor dining last weekend, the council voted to increase the amount the county would reimburse restaurants for takeout orders to 100% (thus netting the establishment 70% of the bill). Republican Councilmember Dave Morell introduced the program’s concept using federal CARES Act funds designated to assist restaurants. (News Tribune)

The Federal Aviation Administration finally rescinded the grounding of the 737 Max and approved the plane for flight.  This was much needed good news for Boeing, which had its aircraft grounded 20 months ago after two crashes. To obtain approval, Boeing needed to alter the software that previously overrode pilot commands. Several airlines, including American, United, and Southwest, have indicated they will resume flying the aircraft in the next few months after pilots receive additional training. (Everett Herald)

Spokane area fitness centers were shocked by Governor Inslee’s shut down of their businesses. One owner stated that, in a conference call a couple of days before enacting the latest restrictions, the governor said he was pleased with the safety precautions carried out by gyms. Inslee gave owners no indications that he was about to shut down businesses again. The owner explained the financial hardship he and other fitness center employers have gone through in 2020 due to Governor Inslee’s orders. “Imagine in a twelve-month period that you are without revenue for eight of those months.” (KHQ-TV)

The president and CEO of the Yakima Chamber of Commerce say that Governor Inslee’s recent restrictions on small businesses demonstrate “he is out of touch.”  Verlynn Best said, “He doesn’t know what it’s like to stand at the door of a small business.” Best was concerned about bars and restaurants that had just filled their inventory after being closed for months, and the latest restrictions will cause their perishable food supplies to spoil.  Meanwhile, Inslee’s spokesperson admitted there is “concern” that contact data did not scientifically prove the recent outbreak was due to business activity, only that it showed it occurred in places where people were not wearing masks inside.  (Yakima Herald) 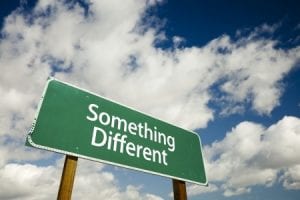 Shift understands that sometimes focusing on the current political situation can be depressing, and that is why we will occasionally feature an uplifting article. This post tells the story of Casey and Effie Parks and how an unexpected interaction between their special needs son and a small group of strangers brought joy into their lives.  It is an uplifting story.  If you like the story, we encourage you to check out Effie’s popular podcast, Once Upon a Gene, which details her family’s journey as they navigate through life with a son who has a very rare disease. (My Mercer Island and Once Upon a Gene)

Governor Inslee has been quick to take credit for random reductions in the spread of the coronavirus over the past eight months, so now it’s time he takes responsibility for the current increase and the loss of wages for thousands of Washington residents during the holiday season.  A couple of weeks ago, Inslee’s vapid re-election campaign avoided discussing his mistakes in office by bragging that the governor’s policies were keeping Washington safe.  The governor took time away from applying to a “green” job in the Biden Administration to announce shutdowns for restaurants, bars, fitness centers, bowling allies, theaters, and indoor gatherings. Inslee cited the record level of new coronavirus cases – all of which happened under his watchful eye.  Workers from these jobs will soon be joining thousands of others applying for unemployment benefits, just a week after Washington State led the nation in new unemployment claims. Since the governor has failed to include other people in his partisan decision-making, the increase in COVID-19 cases and the latest round of job losses are entirely his responsibility. But you won’t hear that from him. (Shift Quick Take) 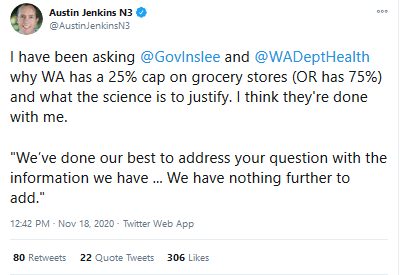 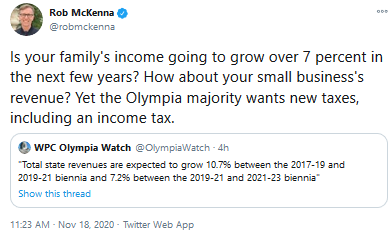