As predicted by many, the Democrats on the redistricting commission have chosen to allow their liberal buddies on the State Supreme Court draw the new legislative and congressional district boundaries.

Governor Jay Inslee continues to abuse the state’s emergency powers laws (for more than 625 days!) and there is no end in sight, as he refuses to say what needs to occur for him to end the “emergency”.  It is reported that the governor will soon be the only person allowed to decide who can go to work for many Washington State employers, by issuing a draconian vaccine mandate on private companies. This after he alone decided who can work for the state government, with the nation’s most restrictive vaccination rules. This is an unprecedented amount of power for one person to hold in a democracy, and Inslee only makes it worse since many of his decisions are partisan – leading more people to not trust state government actions. (Click to read full Shift article)

As many predicted, it appears the Democrat members of the Washington State Redistricting Commission would rather have their liberal buddies on the Washington State Supreme Court decide the new legislative and congressional districts for the next 10 years then to develop maps through a fair negotiation with the Republicans. After much confusion in the final minutes before Monday evening’s midnight deadline, it was confirmed this morning that the commission had failed to complete their task on time.  Thus, nine liberal judges on the State Supreme Court, a majority of whom were first appointed to the court by Democrat governors, will decide the new boundaries. Many Republican insiders predicted this was the goal of the two Democrat commissioners during the entire redistricting process, as it has been in states across the country, since liberal judges will likely produce a more favorable plan for Democrat lawmakers then one fairly negotiated with the two Republican commissioners. (Seattle Times)

It was interesting to watch media members react to the non-public actions of the Washington State Redistricting Commission leading up to its Monday evening deadline.  Many of the same media members who have barely expressed concerns over the non-transparent actions of Governor Inslee during his 625 days of “emergency” one-man rule, suddenly became champions of open government when it came to redistricting.  (Tacoma) News Tribune reporter Sean Robinson abruptly learned the importance of public deliberations when he tweeted, “The commissioners violated the state’s open meetings law.” Crosscut’s Melissa Santos then responded with text from the state law on open meetings. Everett Herald’s Jerry Cornfield then complained that the public had yet to see the maps before a motions was made to adopt the new boundaries.  Seattle Times political reporter Jim Brunner posted 30 minutes past the midnight deadline, “Anyone have any thoughts on what we saw tonight.”  Unfortunately what the media saw is what occurs when reporters fail to hold all lawmakers (including Governor Inslee) accountable to open meeting and transparency requirements. When the media allows one politician to abuse power, others will soon follow. (Twitter)

Far-Left State Senator Joe Nguyen (D – Seattle) believes it is “adding layers of bureaucracy” to allow the legislature to have oversight on the many rules, requirements, and mandates being imposed on Washington State residents by Governor Inslee through his continuous abuse of “emergency” powers.  In an interview with Brandi Kruse, the first-term West Seattle liberal (who just completed a poorly executed intra-party campaign to unseat King County Executive Dow Constantine) stated he is not supportive of ending Governor Inslee’s one-man undemocratic rule of Washington State. “I don’t generally think that adding levels of bureaucracy is the answer and that is what you would do if you gave the legislature more authority.”

So, to Senator Nguyen, the democratic voice of the people in the legislative branch is equivalent to multiple levels of bureaucracy.  I think the founders of our country and state had a more appreciative view of the body. James Madison wrote in Federalist #51, “In republican government the legislative authority, necessarily, predominates.”

Brandi Kruse implied that Democrat legislators are happy to hide behind Governor Inslee’s undemocratic use of emergency powers for it means they are not on the record for either supporting or opposing the governor’s ongoing mandates. “I think lawmakers have gotten away with not saying where they stand on certain mandates handed down by the governor because they don’t have to vote on it. I think that constituents across the state might like to know where their lawmakers… stand on those powers the governor has exerted.” Constituents might like that indeed, but Democrat lawmakers fear letting the public know how little they value their opinions. ([un]Divided Facebook video and Federalist #51 quote)

The Washington State Senate State Government & Elections Committee held a work session this morning, and it included brief testimony on possible alterations to the state’s Emergency Powers Act.  Everyone agrees that the governor needs to have the ability to act quickly during the onset of an emergency, which is why the law exists.  Yet Governor Inslee has abused his power by undemocratically extending it for 625 days, and has made long-range policy decisions well beyond the scope of any “emergency” without consultation with the representatives of the people in the state legislature.  Many open government advocates encouraged lawmakers to amend the state’s emergency powers law, so it is similar to nearly every other state in the country, by placing a time limit (30, 45, or 60 days) before the governor would need legislative approval for emergency orders to continue.  Despite today’s hearing, there is very little optimism that the majority Democrats in the legislature will amend the laws which would end in Inslee’s reign of error, and so their voters could hold them accountable for their decisions. Instead, the Governor’s power grab will continue indefinitely since he has given absolutely no criteria for when it will end.  (Washington Policy Center)

The increase in brazen thefts are the result of criminals’ growing understanding that they will not be punished for their illegal actions, thanks to the Democrats passing pro-criminal legislation during the 2021 legislative session.  Last Saturday evening, a bunch of fireworks were set off in Puyallup’s South Hill Mall as a diversionary tactic as criminals bashed in jewelry display cases and stole merchandise.  Criminals know that police are severely limited in their ability to pursue and apprehend suspects due to the new laws written by Representative Roger Goodman (D – Kirkland) and Representative Jesse Johnson (D – Federal Way), and then passed by anti-public safety Democrat legislators.

Puyallup has been the location of two of the most notable incidents where police were constrained by the new laws.  In July, the Puyallup police called off a K-9 search for a murder suspect due to the new laws and the suspect in car prowling incidents was able to escape questioning from police officers after he rammed two police cars and the new laws prevented officers from pursuing. (MyNorthwest, KING5 News, and News Tribune)

The Seattle Times took nearly 1200 words to tell its readers that the “brain trust” behind Seattle Mayor-elect Bruce Harrell’s transition team is his wife, his two main political consultants, and his campaign manager (who happens to be Harrell’s niece).  It is expected that many of the people which Mayor-elect Harrell will select to lead his administration are the same members of the region’s liberal establishment, who have either been part of the teams behind the city’s five previous failed mayors or part of the city council (and staff) responsible for writing and helping pass legislation that increased homelessness, caused a mass exodus of police officers, forced employers to move jobs to other communities, and resulted in skyrocketing crime rates. Thus, four years from now, we can fully expect Bruce Harrell will be the latest discarded mayor on the slag heap and we will be discussing the transition team of the next mayor-elect of Seattle. (Seattle Times)

Chelan County is expecting rapid growth in the coming five years, forcing the county’s Public Utility District to consider increases in fees to pay for improved infrastructure.  Seven new distribution substations are expected to be built (on top of the 34 now in operation) in the Wenatchee/Leavenworth/Lake Chelan areas during the next five years.  The cost of the new equipment is expected to be $75 million. (Wenatchee World)

Shift’s latest Newsmaker Interview is with Dr. Carol M. Swain, a former Princeton and Vanderbilt University professor, respected political commentator, author, and leading critic of the liberal’s racist “Critical Race Theory” (CRT).  It was announced today that Dr. Swain will be one of the featured speakers at the 2022 Roanoke Conference, which will again be an in-person gathering January 28th – 30th in beautiful Ocean Shores.  We speak with Dr. Swain about her new book (co-authored with Dr. Christopher J. Schorr) Black Eye for America in which she explains why CRT is racist, bad for America, and what we can do to counter its proliferation by liberal activists and institutions.  Dr. Swain describes to Shift readers how opposition to CRT was a leading factor in the Republican election victories two weeks ago in Virginia (her home state) and her plans for the upcoming Roanoke Conference. (Click to read full Newsmaker Interview) 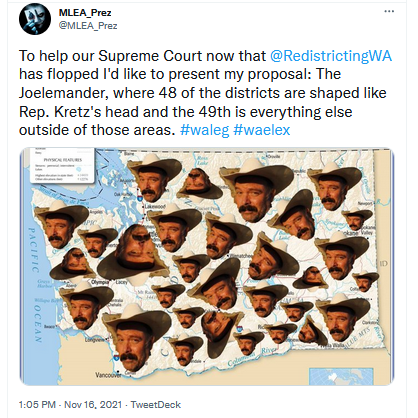 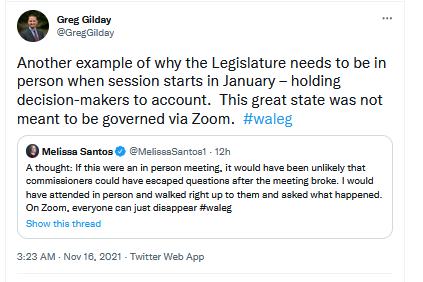 Did you learn something from what you read?