This week’s highly informative Newsmaker Interview is with Senator Lynda Wilson (Vancouver), the ranking Republican on the Washington State Senate’s Ways & Means Committee and the budget leader for the GOP caucus.  The Senate Republicans released their 2021 – 2023 budget last week, and it contained no more taxes, incentives for school districts to reopen, and assistance for those who have been most impacted by Governor Jay Inslee’s random and unscientific “emergency” orders.  When asked why the Senate Republicans released their budget so early in the process, Senator Wilson replied that she wanted to provide transparency, so the public had time to examine their proposal, and because Democrats “keep claiming there is a massive deficit, to justify their own call for more taxes.  But that is false.  Just look at the four-year budget outlook from the governor’s own budget office.” (Click to read full Newsmaker Interview and Senate Republicans 2021 – 2023 Budget Proposal)

First, the Washington State Department of Health (DOH) releases data which it says shows that the state’s COVID-19 vaccination effort is failing to meet its “equity” goals.  Then, the DOH alters its plan to become more “equitable.”  Now the state bureaucrats comes back and claim their original analysis was wrong.  On February 10th, the DOH released a report that revealed that the percentage of Washington State minority members who had been vaccinated was substantially lower than the percentage of each ethnic population in the state.  For example, Hispanics represent 13.2% of the state’s population, yet only 2.5% of those who had then received a dose of the vaccine were Hispanic.  As a result of the report, the state altered its plan to vaccinate more people of color.  Now, DOH reveals that its original “equity” efforts were not that far off, since the number of minorities who meet age-eligibility standards for a shot are far lower than their share of the state’s population.  For example, of those over 65 years old, only 3.6% are Hispanic.  While the original report claimed the state’s immunization effort was reaching less than 20% of Hispanics, the reality is they reached 70% of those who were eligible. Thus the state wasted plenty of resources and valuable time because no one in the Inslee Administration can seemingly count correctly.  Despite state officials knowing since last Spring that a massive vaccination effort, that first served seniors and health care workers, was needed to end the pandemic, and knowing that the state prioritized ethnic “equity” in all its plans, not one of the thousands of Inslee’s employees took 5 minutes to look up the percentages of state residents who are older than 65 in each ethnic populations. To save them time, here is the link. (News Tribune, Department of Health February 10th Report, and Washington State Office of Financial Management)

While Governor Inslee and Democrats are slapping themselves on the back for acting quickly to provide COVID-19 relief, the reality is they took 40 days to pass a bill allocating money which the federal government had previously sent.  Today, the Governor is finally signing HB 1368, which allocates $2.2 billion in federal aid for the state’s COVID-19 response. If the Democrats had followed the advice of the Republicans, many community leaders, and several newspaper editorials, they would have called a special session last year and this money would already have been distributed, because it all came from the federal government. And even if they refused to hold a special session, why didn’t the liberals in charge in Olympia have this bill prepared to be passed during the first week of the legislative session? Democrats have solid majorities in the legislature, but they can’t pass a bill quickly to give away someone else’s money to their own constituents in need? (Cornfield Report/Everett Herald and Washington Legislature Bill Summary)

Some serious questions arise about the Democrats’ wealth tax while reading a GeekWire article that highlights how the liberals’ latest proposal will certainly export job creators from our state.  According to the tax bill’s author, Representative Noel Frame (D – Magnolia), Amazon CEO Jeff Bezos will already claim another state as his residence and thus will not be subjected to the Democrats’ latest attack on “the rich.”  She did say that Microsoft founder Bill Gates is likely “too invested” in the state to move, and thus he would be subjected to an approximate $1.3 billion annual tax bill.  Given the bill sponsor’s own language, do we really want to pass legislation that discourages wealthy individuals from “investing” in the state?  Isn’t encouraging “investing” here exactly what the Washington State government should be encouraging? Also, isn’t it worth considering whether Bill Gates would create more value for society by spending his own $1.2 billion through his foundation, than in letting people like Rep. Frame decide how to spend it (after taking a healthy cut off the top for “administration” by the state)?Keep in mind that Gates and his wife Melinda have already pledged that nearly all the money they have will go towards charitable causes, as is evident by the $48 billion that have been “invested” in the Bill and Melinda Gates Foundation.  Thus, the Democrats’ greedy bill will take money out of the efficient hands of the world’s leading philanthropic organization, and instead let it be spent by the very inefficient and wasteful Washington State government, where the top beneficiaries of spending are state employee unions. (GeekWire and Bill and Melinda Gates Foundation)

The owner of a downtown Seattle clothing store was “sick and tired of being sick and tired” and decided to move his business to Arizona.  Jerry Rodolfo, the owner of Bookie Clothing, said he once confronted Seattle Mayor Jenny Durkan about the increased crime in downtown Seattle, and she provided him with no reassurance that the situation would improve.  So Rodolfo decided to move his business to a more welcoming environment.  As a quick side note, it appears Mayor Durkan has realized her liberal methods can do extremely little to improve the decaying conditions of the city, and she has already checked out with 10 months left in her lame-duck administration.  Yesterday Durkan and/or her staff felt it was a productive use of their taxpayer-funded time to tweet about the Mars landing of the Perseverance rover, which every news agency and millions of Twitter users had already posted. (MyNorthwest and Twitter)

High school football players have resumed workouts in King and Snohomish counties and will soon begin a shortened football season. This is good news for many players who are seeking scholarships from colleges, and for many more who just want to play one more season of team sports before joining the “adult” world.  Many had hoped the season would have occurred last Fall, and now hope the truncated and rescheduled season will provide them with a few opportunities to attract the attention of college recruiters. (Seattle Times)

Governor Inslee’s Low Carbon Fuel Standard (LCFS) will benefit Brazilian sugarcane growers who are often cited by environmental groups for the destruction of the rain forest.  During recent testimony on the LCFS bill (HB 1091), both Ben Buchholz of the Northwest Agricultural Cooperative Council and Dan Coyne, from Food Northwest, stated that the LCFS would increase the cost of farming in Washington State, and give money to corn farmers in the Midwest and sugarcane growers in Brazil.  It is interesting that Inslee’s “environmental” proposal would reward those who are cited by worldwide environmental groups as major culprits in the destruction of the Amazon rain forest. (Capital Press, Washington Legislature Bill Summary, and Reuters)

Republican Senator Brad Hawkins has an interesting idea for school districts to consider – switching the spring and summer break.  The former Eastmont (East Wenatchee) School Board member, and current ranking member of the Senate Education Committee, believes that by the time the extended spring break would conclude, enough teachers would be vaccinated so that in-person instruction would be allowed to take place from June – August. (Wenatchee World)

Proposed House Republican budget helps the families the Democrats have forgotten.  Democrats patted themselves on the back in 2007 for creating the Working Families Tax Credit.  Problem is, they never funded the program (because it does not achieve the primary liberal goals of expanding the number of government employees or rewarding another special interest group).  Republicans have proposed a budget that funds the long-forgotten program, helps working families (including childcare options and assisting with distance-learning expenses), and does not increase taxes. (Click to read full Shift Article) 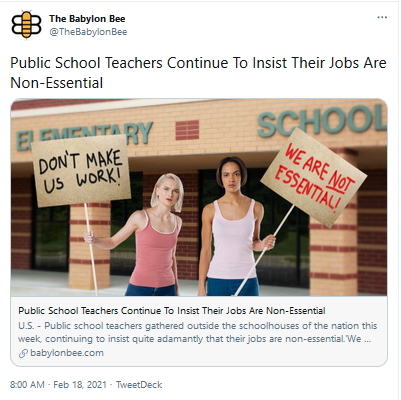 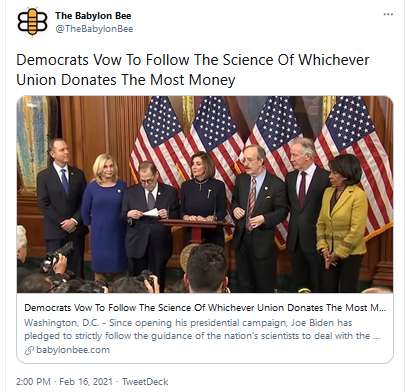