Governor Jay Inslee congratulates himself while failing to understand that actual data demonstrates the state’s low COVID-19 death rate has very little to do with his policies. 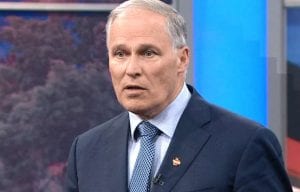 Governor Inslee likes to argue that his policies have kept the state’s COVID-19 death rates low, but he conveniently ignores the fact that Washington State began the pandemic with a younger and more healthy population, the far more likely reason for the state’s lower mortality rate than Inslee’s random “emergency orders”.  COVID-19 is more fatal to those over 65 and those with existing respiratory problems – two classes of people which Washington State has a smaller population of than other states.  While the governor claims his numerous error-filled actions (including a failed contact tracing effort and a disastrous vaccination plan) are the reasons for fewer COVID-19 related deaths in Washington, the health and the age of the state’s population are a more significant contributor to fewer deaths. But, Jay can’t take credit for that, so he hopes you will ignore it.  (Click to read the full Shift Article)

While Governor Inslee and the Democrats continue to spout their greedy argument that the state needs to raise taxes to pay for basic state services, let us take a quick review of the state’s budget since the governor has been in office.  In 2013, the state budget was $32,113,487,000.  In 2021, the budget is $54,431,794,000.  That is a whopping 69.5% increase in just 8 years!  In terms of per person spending, it has grown from $4,633 in 2013, to $7,022 per Washingtonian in 2021.  That is a leap of 51.6% during Inslee’s two terms, a clear explosion in the size of the state budget during the Inslee Administration.  If there is a failure in the state not being able to deliver basic services, it is because the Jay Inslee is not doing an efficient job with the money he has been given by the taxpayers. But, as usual, the governor needs to blame somebody for his failures, so he attacks taxpayers for being selfish and not providing enough money to the state for him to waste. (History of Washington State Operating Budget)

Yesterday was the deadline for legislators to pass policy bills out of committee, and it’s now clear that shortsighted Democrat “leaders” believe there should be no floor debate on measures to reform the governor’s emergency powers.  Not one bill proposed by Republicans to reform the state’s emergency powers laws was allowed to be voted on, in either the House or the Senate.  Despite the many COVID-19 related errors and failures of Governor Inslee, and the overwhelming support from the public for reform after seeing the state’s emergency powers laws actually put to use, the Democrats apparently believe the legislature should never be involved in decisions made during an emergency. The Democrats clearly support Inslee-style dictatorial control for every future governor, Democrat or Republican, and that he or she should be able to impose whatever laws he or she desires without interference from those elected to the legislature. Evidently the current Democrat legislators understand their place in the political food chain, and that is to do what they are told, and not make any decisions themselves. (Washington Policy Center)

KOMO News asked when can regions of the state move forward into Jay Inslee’s Phase 3 of re-opening the state, and the answer is pathetic? They responded to their question by stating, “The governor does not yet have an answer.”  Despite the Democrats’ insistence on not allowing anyone but the governor to make important decisions during the “emergency”, Governor Inslee has provided no timeline or set of metrics needed for regions to open up more of their local economies. This is frustrating local officials around the state, who have been upset that the Inslee Administration has rarely consulted with them over his mandates.  This lack of understanding for local concerns from Governor Inslee also upsets restaurant operators and workers.  The governor has randomly opened and closed their businesses over the past 11 months and now will not provide them with a clear set of guidelines be allowed by the state to have even 50% capacity in their establishments. (KOMO News and Yakima Herald)

The latest Democrat proposal for car tab relief actually provides little actual relief for vehicle owners. In 2019, the Washington State voters passed I-976, and strongly expressed their desire for a $30 cap for buying the annual car tabs required by the state. Due to a technicality, the initiative was overturned by the all-Democrat Washington State Supreme Court last October.  Yet, the public sentiment for tab relief still remains. So, brand-new 28th District Senator T’wina Nobles (D – Fircrest) has proposed the Democrats version of “relief.”  In the Democrats’ bill (SB 5448), vehicle owners will still have to pay the high car tab fees, they just get to spread it out over several months.  This is a far cry from the relief proposed by Nobles’ predecessor.  After the Court rejected the voters decision on I-976, Republican Senator Steven O’Ban immediately stated that the legislature should listen to the will of the people and enact legislation to cap car tabs at $30, just as the legislature similarly did in 2000, when the court shot down another car tab initiative. The actions of these two senators provides a clear example of the differences between legislative partisans – the Democrats support the needs of the government, while the Republicans support the will of the people. (Washington Legislature Bill Summary and The Suburban Times)

Seattle Mayor Jenny Durkan gave a very brief (six minute) State of the City speech that was full of liberal code words, but extremely light on details or even a mention of the true problems facing the city.  The mayor used the latest favorite liberal buzzwords “equity” and “equitable” six times during her short speech, but failed to provide a plan for a dying downtown, homelessness, or the exploding crime rate.  Clearly the mayor no longer cares about leading the city, as she has already resigned herself to the fact she has become the fifth consecutive Seattle mayor to depart the office under a cloud (i.e. rejected by the voters, resigned for sexual improprieties, or chose not to run for re-election due to poor poll numbers). (Facebook video of Durkan’s State of the City speech)

Due to a city-imposed hazard pay law, QFC has announced it will be closing two of its Seattle locations – both of which have been popular neighborhood markets for decades. The chain announced that it will be closing its Wedgewood and Capitol Hill locations in April.  A statement from the company said, “Unfortunately, the irreparable harm that will come to workers and our Seattle community is a direct result of the City’s attempt to pick winners and losers among essential businesses and workers.”  The closure of the two stores will mean that thousands of Seattle residents will no longer be within walking distance of a grocery store, and will now need to drive a car to pick up supplies. (MyNorthwest)

Liberals continue to blame everyone and everything besides Sound Transit for the agency’s latest ($11.5 billion) budgeting failure. Yet, this has been Sound Transit’s strategy all along.  Similar to nearly all large public works projects, transit officials under-estimated the original cost of the project in order to gain public support.  Then, once the project begins actual planning for construction, Sound Transit officials say they need more money to finish the project.  If a private company had failed to estimate the future as badly as Sound Transit has, it would be out of business.  Yet for Sound Transit and its highly paid executives, it is just part of the game to soak money from the taxpayers. (Seattle Times)

The increase in violence by liberal activists, and the explosion in the crime rate in Seattle, has led to a dramatic escalation in security guard jobs. While many businesses have either closed or moved out of downtown Seattle, the retailers which have remained open have sought more protection from private security companies.  One security firm reports a three-fold increase over the course of the last year. The private companies should send thank you notes to Seattle City Attorney Pete Holmes and King County Prosecutor Dan Satterberg for making sure that criminals are not being charged for crimes in the city, forcing retailers to find protection from them. (KOMO News)

The Mayor of Kennewick says Governor Inslee owes an apology for his condescending comments towards the citizens of South Central Washington.  Mayor Don Briton believes the governor chastised the residents of the region, after the state’s Department of Health erred by using faulty data that originally kept the six Central Washington counties in Phase 1.  When local officials caught the error, they notified Governor Inslee’s office to correct the mistake, which allowed the region to join the rest of Washington State in Phase 2.  The mayor said, “I think the governor needs to kind of make a public announcement and publicly apologize to the communities and the citizens in our region. We were doing what needed to be done to move to phase two and we continue to do that.” (KEPR – TV)

Despite correcting a data mistake that allowed the South Central Region to move to Phase 2, Kittitas County officials are still concerned about being kept in that region.  The Ellensburg Daily Record stated that adjusting that error relieved state officials from clarifying why Kittitas County (with only 30 cases out of 50,000 residents) was still stuck in Phase 1.  Many local officials believe that Kittitas should be included in the Puget Sound Region with King, Snohomish, and Pierce counties, instead of in a region that includes Yakima and the Tri-Cities. (Ellensburg Daily Record)

Democrats want to tax you out of your car. Once again, the centerpiece of the wealthy environmental groups’ legislative agenda is passing a Low Carbon Fuel Standard (LCFS), which government studies show could increase the price of gas by 57-cents per gallon (on top of the highest gas tax in the country). Liberals seemingly do not care that less wealthy people do not live like them in high-priced downtown Seattle condos, within walking distance of their work and shopping.    You can also submit your written views on LCFS by clicking here. (Click here to read full Shift article, Washington Legislature Bill Summary, Remote Testimony Registration for HB 1091, and Comment Form for HB 1091) 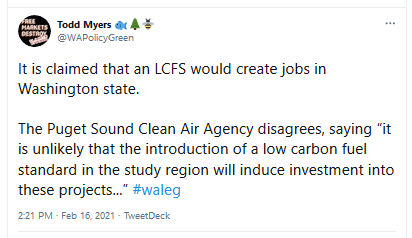 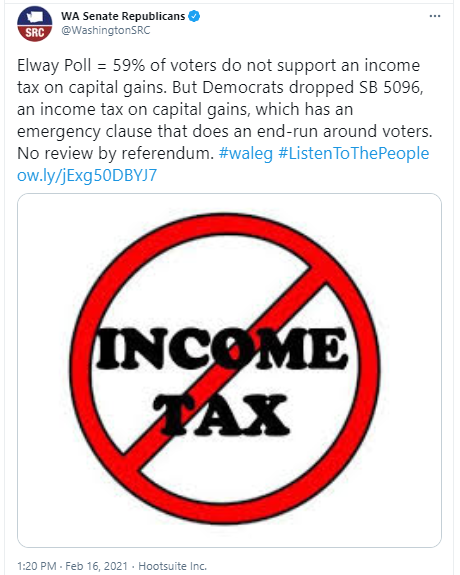