A new report from the Washington Policy Center asserts that if the Democrats in the Washington legislature pass both their Low Carbon Fuel Standard (LCFS) legislation and their cap-and-trade bill, it will have a “corrupting effect, rewarding insider special interests and favored political allies while doing absolutely nothing to reduce CO2 emissions.”  While the cap-and-trade bill sets overall CO2 emission rates for the state, the LCFS forces Washington entities to reduce emissions by purchasing biofuels, which are more expensive than other more efficient methods for  in reducing CO2.

Thus, while Democrats want to require Washington citizens reduce CO2 emissions through the cap-and-trade legislation, the LCFS is just another costly mandate on top of that, forcing residents and businesses to purchase the less efficient and more expensive biofuels to comply with the law.  And it is no surprise that out-of-state (and out-of-country) biofuel corporations which would profit from these mandates have a cozy relationship with Democrat lawmakers.

The report concludes by stating that LCFS supporters know that biofuels are inefficient and expensive, but clearly “Fighting climate change isn’t their priority. They see climate change is an opportunity for profit. And they are taking advantage of the current legislative atmosphere in our state capitol to further their own self-serving goals.” (Washington Policy Center)

The leader of the state’s largest business organization argues that Washington State lawmakers should not be imposing unnecessary taxes which will hurt employers and workers, but instead should be focusing on ways to create jobs for those who are still unemployed.  In a Kitsap Sun op-ed, Kris Johnson of the Association of Washington Business writes that there are currently 232,000 fewer jobs in the state then there were before the pandemic hit.  He also points out that the state’s budget is in fine shape, with $5 billion more tax dollars coming in than projected last year, plus $11 billion in federal bailout funds – and thus there is no need to raise taxes. Yet Democrats in Olympia are advancing tax measures which would keep Washington employers from hiring more workers and would put Washington businesses at a competitive disadvantage. Johnson concludes his column by stating, “Rather than searching for ways to pad an already flush budget, they should be focusing their efforts on economic recovery and job creation.” (Kitsap Sun)

The Seattle Times is extremely critical of Governor Jay Inslee’s Department of Corrections (DOC) and its failure to provide medical care for its inmates.  The Times’ editorial points to a recent internal DOC report which showed that Inslee’s appointees once again unnecessarily delayed inmates from obtaining diagnostic tests after they displayed cancer signs.  The Times was also critical of the fact that the DOC failed to adhere to the state’s own social distancing and safety guidelines during the COVID-19 pandemic.  As the result, 40% of those incarcerated in the state (approximately 6,200 individuals) have been infected with COVID.  (Seattle Times and Office of Corrections Ombuds report)

The Washington Observer reveals that buried in the state budget is the sale of two houses on the edge of the Capitol Campus which have long housed the (dwindling) contingent of reporters who cover the legislature.  Since the press corps has bottomed out at just six media outlets covering the legislature full-time from Olympia, reporters will now be housed in small offices inside the Legislative Building (a.k.a. “the “Capitol Building”). (Washington Observer)

With time running out to pass non-budgetary bills, legislators continue seek a fix for the state’s now-unconstitutional drug possession laws.  Earlier this year, in the Blake decision, the all-liberal Washington State Supreme Court ruled that the state’s drug possession law was unconstitutional, because it failed to require proof that the suspect “knowingly” possessed the illegal substance that was found in their possession.  As the result, many drug possession cases have been thrown out, and police are not arresting people for drug possession.  Democrat Senator Manka Dhingra of Redmond has proposed a bill (SB 5476) to make it legal to carry “small” amounts of illegal drugs – just a little “recreational meth” or a “fun-size” amount of heroin, if you will — while Republican lawmakers have proposed five separate pieces of legislation to fix the state’s possession laws, allocate more funds to provide treatment to addicts, and impose stronger penalties on those who manufacture illegal substances. However, because the Republican bills have elements which improve public safety woven into them, that is a hard vote for Democrats afraid of a base that demands reducing public safety. (KING5 News, Justia/Blake Decision, Washington Legislature Bill Summary, and Washington House Republican Caucus media release)

The Seattle School Board president and another board member inform the mayor’s office that they do not want a sweep of homeless encampments on school properties.  As students are (finally!) returning to in-person instruction, two Seattle schools (Meany Middle School on the East side of Capitol Hill and Broadview – Thomson K-8 School in North Seattle) have homeless encampments on their property.  Despite the obvious security risk, School Board President Chandra Hampson and Director Zachary DeWolf have informed the city that there should “never” be a sweep of encampments from school district property, despite the repeated refusal of encampment residents to move into city-funded shelter.  While limiting the city’s ability to resolve the issue because it doesn’t fit with their far-Left-wing politics, the school board members still whine that the city has to do something about the problem.  We wonder if these board members realize that by publicly stating that encampments cannot ever be removed from school properties, they are encouraging more tents in schoolyards in the future. (MyNorthwest)

The Washington State agriculture community is not thrilled with current legislation addressing the overtime issues forced on it by an overzealous State Supreme Court, but farmers are willing to support the bill because it protects them from lawsuits filed by workers seeking retroactive overtime wages.  Last November, the liberals on the Washington State Supreme Court overturned precedent and ruled that certain agriculture businesses were not exempt from overtime pay.  Despite farmers paying the legal wages at the time, the lawsuit enabled workers to sue farmers seeking retroactive pay for work years ago.  If the lawsuits were successful, many farmers would have faced bankruptcy or be forced to sell their farms.  While SB 5172 ends the prospect of retroactive pay lawsuits, it forces Washington farmers into a fast “stair step” approach to paying overtime wages.  Between this legislation and other legislation which could quickly raise the price of gas by 52 cents a gallon or more, the Democrats in Olympia evidently are not concerned that they are placing many Washington farmers into a competitive disadvantage with farmers in states with more responsible legislators. (Pacific Northwest AG Network, Washington State Supreme Court ruling, and Washington Legislature Bill Summary and Twitter)

Prescribed burns by the Washington Department of Fish and Wildlife are an effective resource management tool and reduce the likelihood of destructive wildfires.  Mismanagement of forest lands (not climate change as Governor Inslee unscientifically claims when he wants some media attention) has increased the number and severity of wildfires in the Pacific Northwest, according to actual scientists.  Conservatives have long argued that the state should follow long-held Native American strategies to control burn vegetation and downed trees, to remove “fuel” that wildfires need to spread. (Daily Fly and Shift Interview with Professor Cliff Mass)

Governor Jay Inslee and Democrat legislators have resorted to Orwellian tactics in their greedy pursuit to increase the size and power of state government. In George Orwell’s disturbing classic “1984”, The Ministry of Truth utilizes “Newspeak” to alter the meaning of words to fit the needs of the government.  We are seeing a modern version of this practice here in Washington State, where Democrat legislators keep trying to convince us that an “Income Tax” is an “Excise Tax.”  Yet they are all alone in this belief.  Every major tax and budget authority in the country (including the 49 other states) considers a tax on capital gains to be a tax on income (which is unconstitutional in Washington State) and NOT an excise tax. Remember, Ignorance is Strength.  (Click to read full Shift article) 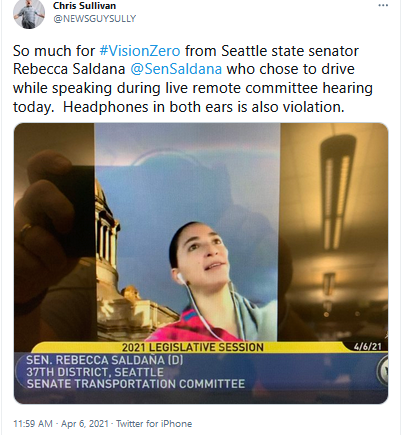