Overall, the 2019 elections are a thumbs up!

Quick note on the election

In many local races across the state (including Spokane, Aberdeen, Renton, Whatcom County, Bellingham, Redmond, Hoquiam, and Sammamish) there were many fiscally responsible local candidates elected and responsible measures passed.  At the state level conservative measures were passing.  In Seattle, Socialist councilmember Sawant appears on the ropes and Herbold is barely holding on.  The Seattle voters are telling their elected officials they can be liberal, just don’t be crazy about it.

We have a couple of election stories today and will have more election coverage in the coming days.

ShiftWA has uncovered documents that show the operator of Spokane’s newest homeless shelter has a criminal past.  Last week the charity was awarded $740,000 by the Spokane City Council to run a homeless shelter. Jason Green, the registered agent of the charity, pleaded guilty to embezzlement in 2015 of nearly $500,000 from his previous employer and was sentenced to 30 months in prison. The Spokesman Review covered the story on Tuesday after we broke it Monday evening. (ShiftWA and Spokesman Review)

Seattle Socialist city council candidate Shaun Scott secured over $120,000 in money from the city’s campaign voucher program and spent $18,000 on personal items (travel, food, haircuts).  Also, the Scott campaign had at least 10 employees but there is no record of payroll taxes. (ShiftWA)

Washington state Superintendent of Public Instruction, Chris Reykdal, believes legislative Democrats should punish voters for passing I-976.  In a tweet sent just as the votes were coming in Tuesday evening, Reykdal states, “If Washington State Legislative Democrats do not pull down transportation projects in direct proportion to the 976 yes votes by county, then nothing will change! If certain counties want transportation taxes cut, then they don’t get the projects. Step up Democrats!” While it is refreshing to see a Democrat honestly display his belief that the public is here to serve the needs of the government, it is discouraging that he is so clueless to understand that it is this attitude which leads voters to pass initiatives like I-976. (Twitter)

The latest scientific evidence against the breaching of our regions’ dams comes from the lack of wind the Pacific Northwest has experienced during the past week. Many who support the dams’ removal claim wind generated power could replace the lost hydroelectric power.  Yet during the past week during the calm weather wind generated only 0.04% of the regions power needs while hydroelectric supplied as much as 78%. (Washington Policy Center)

In a fundraising email sent moments after King County vote totals were released, Kshama Sawant blames Amazon for her poor showing.  Amazon had not spent a cent when Sawant had negative approval ratings in the 40’s and 50s.  Amazon did not force Sawant to play a game on her phone while a citizen tried to speak to the council.  Amazon did not participate in the primary election when Sawant obtained only 37% of the vote.  Amazon did not develop Sawant’s fundraising strategy of obtaining 40% of her funds from out of state (Seattle voters don’t like that). Amazon was not the one who made Sawant look hypocritical by having her staff make repeated purchases from Amazon.com.  And Amazon certainly was not the one who imposed a head tax on Amazon that lost Sawant support among the unions. (Sawant email, SeattleMet, YouTube, King County Elections, ShiftWA, and Crosscut)

While most of America will be honoring veterans this weekend, the Mayor of Port Angeles wants to remove the silhouettes of soldiers from a fence at the city’s Veterans Park.  Mayor Sissi Bruch said, “I’ve had comments from people saying do we have to do guys with guns when guns are killing our children in schools?” Since Governor Inslee inserted himself into a picture of colonial soldiers (to call himself a “Founding Father of Climate Change”), we wonder if he supports his liberal friend in taking these silhouettes down from Veterans’ Park?  (Port Angeles Daily News and ShiftWA)

Many are concerned with Washington Department of Fish and Wildlife (WDFW) continuing to buy land in Asotin County since it already owns nearly 12% of the county.  Currently, 3,000 more acres have been targeted by the agency. Local residents are anxious that the WDFW properties harbor wolves, cougars, and other predatory animals.  County officials are worried that land that transfers from private to government ownership is taken off the tax rolls. (Lewiston Tribune) 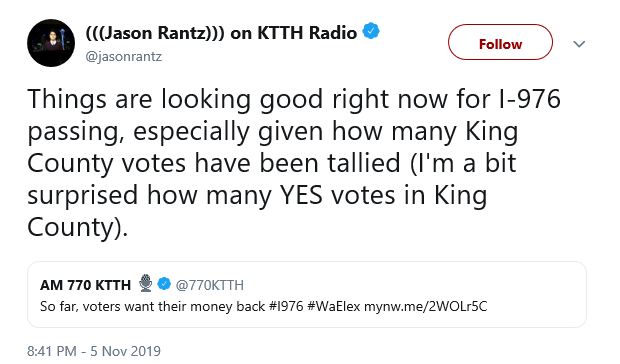