Podlodowski, who has yet to condemn the liberal activists for their attempted mass murder of police officers, posted her tweet in support of NTK on Tuesday evening. It read, “Seattle City Attorney Candidate Ann Davidson is a Trump Republican and not fit to hold office of any kind.” She posted this falsehood knowing that Davison supported Hillary Clinton in 2016 and Joe Biden in 2020. But as Chair Podlodowski has often done in the past, she just makes stuff up whenever facts get in the way of her narrative. (Tina Podlodowski Twitter, Brandi Kruse Twitter, and KOMO News)

The Freedom Foundation announced it is filing a Racketeering Influenced Corrupt Organizations (RICO) lawsuit against Governor Jay Inslee, members of his administration, and the Service Employees International Union (SEIU) Local 775 for “a pattern of unlawful behavior.”   The lawsuit comes after the multiple alleged incidents of the union forging the signatures of state workers for the union to collect dues.  Attorneys for the Freedom Foundation claim that because of the nearly 20 incidents of forged signatures that have been uncovered in West Coast states, there is “a pattern of unlawful behavior.”  Attorney Sydney Phillips said, “you have to concede these actions indicate a conspiracy by the unions at the highest level to deny public employees their constitutionally protected right to decline union membership and dues.”

Since the 2018 Janus decision by the U.S. Supreme Court, government employee union dues are no longer automatically taken from state workers’ paychecks.  As a result, hundreds of thousands of government union workers have opted out of paying dues the union uses to promote its self-serving desire to raise taxes and increase the size of government.  The Freedom Foundation is alleging that unions are now forging workers’ signatures to allow them to steal money from workers’ paychecks to partially make up for the revenue the unions lost due to the Janus decision. (Freedom Foundation media release and Smarter Government Washington)

The Washington State Redistricting Commission is seeking comments from the public on the four different proposed maps for the new boundaries of the state’s 49 legislative districts and its ten congressional districts.  Each of the four voting members of the commission (two Republican and two Democrats) has provided their maps for new districts.  The public can view the maps and provide their opinions via email or through virtual Zoom meetings planned for next week. Visit the commission’s website for more information. (Vancouver Columbian and Washington State Redistricting Commission)

The City of Seattle is now the target of attacks from the liberal “Woke Cancel Culture” as the Sauk-Suiattle Tribe demands the city remove Chief Seattle’s image from its logo.  The dispute the tribe has with the city involves the dams on the Skagit River that provide power to Seattle City Light. The tribe states the three dams fail to provide a method for endangered salmon to make it upstream.  An August 6th letter from Tribal Chairman Nino Maltos has yet to be responded to by any City of Seattle elected official.  Instead, Seattle City Light CEO Debra Smith responded by sending a letter that simply states, “Seattle deeply respects the unique interests and perspectives that the Tribe brings.” The tribes’ Chairman said that it was insulting not to receive a response from any of Seattle’s liberal elected officials. He pointed out the hypocrisy of the city’s politicians who have passed resolutions calling for the removal of Snake River dams (despite the improvement in their designs and procedures, which allow an increasing number of salmon to traverse through the dams safely). The hypocrisy does not stop there – elected officials have chosen to ignore tribal concerns even though they start each city meeting with a statement that the city recognizes “we are on indigenous land, the traditional and current territories of the Coast Salish people.”  (KING5 News,  Washington Policy Center, and meeting notes of the City of Seattle Planning Commission)

The Biden Administration has thus far ignored Governor Inslee’s requests to allow vaccinated Canadians to enter the Point Roberts peninsula, which has suffered significantly due to two summers of not allowing Canadians to enter.   Thus it appears the only benefit the governor has received from the administration to reward his many divisive partisan attacks during the 2020 campaign was for the president to remove the political albatross Suzi LeVine from around the governor’s neck. Governor Inslee wants the president to make the small community, which can only be reached by land through British Columbia, the lone exception to his ban on Canadian visitors. (MyNorthwest, Shift, and Google Maps)

King County Elections stated that the Recall Sawant campaign has turned in enough valid signatures for the recall effort to appear on an upcoming ballot.  Since more than the required 10,687 signatures (thus far, 11,350 signatures have been approved with 2,000 more to be examined) were accepted too late for the recall to appear on the November general election ballot, a special election will need to be held. A December 7th special election is currently being discussed but won’t be official until the county officially certifies the signatures.  Councilmember Kshama Sawant’s campaign blasted out an email this afternoon stating that because there has never been a December election in Seattle’s 150-year history that the timing of the election is “a complete affront to democracy.” (Seattle Times and Kshama Sawant Campaign email)

Some University of Washington students have begun a petition to force school administrators to offer students the option of participating in classes online.  Students say they are concerned about the spread of the delta variant. Even if the university requires all people on campus to be fully vaccinated against COVID and wear a mask indoors, they don’t feel safe. (KING5 News)

Seattle’s lame-duck Mayor Jenny Durkan released her proposed 2022 budget, and it indicates the city will do nearly nothing to remove the encampments that have taken over many neighborhood parks. Still, the city will hire more government employees. This follows years of the city, county, and state, increasing the size and cost of government while the problem of homelessness (and the associated drug and crime problems) continues to grow.  The mayor’s budget sets aside no funds to remove those encamped in city parks. It does provide $6.25 million for needle collection, garbage pickups, bio-waste removal for RVs and graffiti cleanup, $2 million to repair the damage done by the encampments in 50 different parks and $1 million to “address the impacts and management of unsanctioned encampments in parks.” The city will also hire more people to “track litter removal, storage of personal belongings and compliance with the city’s rules on camp removals.” (KOMO News)

The Seattle Times editorialized that Washington State University football coach Nick Rolovich “should get his vaccine now or clean out his office.”  The newspaper then blames WSU President Kirk Schulz for being too lax of a boss to the state’s highest-paid employee (Coach Rolovich makes $3.2 million a year).  Rolovich said he would abide by Governor Inslee’s vaccine mandate, which calls for the termination of any state worker or contractor who cannot provide proof of being fully vaccinated by October 18th.  Thus far, the coach has refused to elaborate on how he will follow the state employee mandate while maintaining his objections to the vaccine.  (Seattle Times)

Yakima County health officials said they would be reopening their drive-thru COVID testing facility at the Yakima County Fair Park.  The current plan is to have it reopen before October 18th and in operation five days a week. (Yakima Herald) 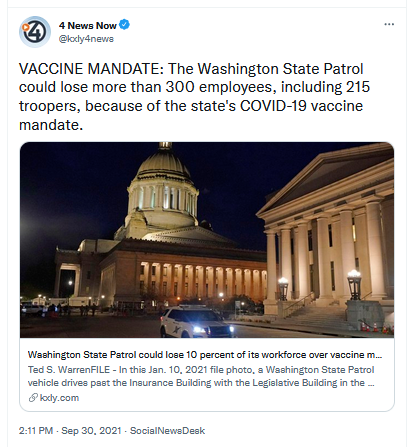 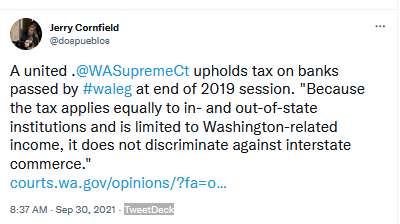