Mayor Jenny Durkan continues to be in denial that Seattle is not rapidly declining due to liberal policies.

Does Seattle Democrat Mayor Jenny Durkan continues to believe that the on-going violence and riots in her city are part of our very own “Summer of Love?”  Following South Dakota Governor Kristi Noem’s speech at last week’s Republican National Convention, where she accurately stated that in Seattle, “violence is rampant. There’s looting, chaos, destruction and murder,” Mayor Durkan immediately appeared on MSNBC to proclaim everything is fine.  Yet, to everyone who is not Mayor Durkan or part of the professional protest crowd, everything is not fine. In a city that once boasted being the country’s “most livable city,” the homeless have taken over downtown, some businesses are boarded up while others are moving employees out of town to avoid paying more taxes for less services. Seattle is facing the situation that it may not be able to recover from the extreme actions of its city council, while state “leaders” like Governor Jay Inslee and Attorney General Bob Ferguson stay silent. (Shift)

Even the most liberal daily newspaper editorial board in Washington State believes Governor Inslee and the Democrat legislative leadership are wrong to not call for an immediate special session of the legislature to repair the state budget.  The Everett Herald, which has been untethered from reality and moving steadily Left over the last few years, has joined nearly all other Washington State newspapers to support the rational demand for an immediate special session so legislators can repair a budget that has been negatively impacted by a projected $8.8 billion shortfall in projected tax revenues. The Herald does mention that Democrats do not want to a special session prior to the election, since as Shift has pointed out their (unpopular) preference is to raise taxes on Washington citizens who have already suffered financially from the coronavirus outbreak.  The Herald correctly states out that by not making small cuts today, much more drastic cuts will need to be made later.  The newspaper’s editors are also concerned that this do-nothing approach will severely hurt higher educational opportunities for Black, Latino, and Native American students. (Everett Herald)

In an interesting development in the race to become Washington’s next Lieutenant Governor, former gubernatorial candidate Joshua Freed has announced that he is running as a write-in candidate for the position.  In a crowded primary field (that included four Republicans splitting the vote),  liberal Congressman Denny Heck and very liberal state Senator Marco Liias were the two candidates who made it past the top-two primary.  This will be interesting to watch as the two Democrats split the shrinking Democrat vote, which could allow Freed to be one step away from the Governor’s mansion should he consolidate all non-liberal support.  This outcome could eliminate the very slight possibility of Governor Inslee becoming a member of a possible Biden Administration, since he would not want to turn the mansion over to a Republican, even until a special session. (Q13’s The Divide)

Governor Inslee is so desperate to impose new taxes on Washington citizens that he has endorsed a far-Left challenger to a sitting Democrat Senator, only because the incumbent  does not rubberstamp liberal tax measures like the income tax Inslee is desparate for.  On Monday, Governor Inslee (most likely following the marching orders of his major campaign contributors at the Washington Education Association) endorsed “progressive” (i.e. someone who wants to raise your taxes) challenger Ingrid Anderson over two-term incumbent Democrat Senator Mark Mullet in the 5th Legislative District. Both Democrats made it through the top-two primary election, which was among the most expensive in the state.  Mullet, who is a business owner and employer, has not always supported the many tax increases proposed by Governor Inslee and the teachers unions.  Even though Inslee attempted to use environmental issues as his excuse for breaking the tradition of supporting incumbents, Mullet has a strong record on supporting environmental issues.  It will be interesting to see if this is another political strategy employed by the Democrats that could backfire in November, and could lead to Senator Mullet working even more with those who agree with him on fiscal issues in the Republican caucus next January. (AP/MSN)

A Thurston County Superior Court judge ruled that petitions from three political parties had too many “crossover” signatures, and thus failed to earn a spot for their presidential candidates on Washington State’s November ballot.  State law requires parties to obtain “1,000 signatures from eligible Washington voters who have not signed another party’s nominating petition.”  Yet the candidates for the Alliance Party, American Solidarity Party, and Constitution Party each had hundreds of signatures that appeared on many petitions and thus have been declared ineligible for the General Election ballot. (News Tribune)

A new high school student organization, Student Athletes of Washington, have collected 18,000 signatures in two days asking that Fall sports be allowed to resume.  The group is collecting the signatures to present to Governor Inslee asking state officials to not delay Fall sports.  The group writes, “We are writing to ask that the traditional Fall sports not be delayed or postponed, thereby allowing them to be played this Fall as originally scheduled. We feel that our voice is not one that is being considered or heard, as it feels that those in positions to make decisions on our behalf are not looking at things from our collective point of view.” (iFIBER One)

Brandi Kruse criticized local Democrats regarding their silence on the never-ending violence against police officers being conducted by Left-wing activists in Seattle.  In a commentary, Kruse criticized the double standard employed by the Democrats, which became crystal clear following last week’s attempt by protestors to set fire to the East Precinct while also trying to seal exit doors with quick-drying cement. Kruse said, “Can you imagine if a Right-wing group tried to light a building on fire in Seattle with people inside? If you think one second would go by without city leaders condemning it as an act of domestic terrorism, then you are fooling yourself.  There is no explanation or excuse for their silence on this. None.”  While Kruse’s comments were mostly directed at Seattle and King County Democrats who have been silent about the violence, they apply to all Democrat officials and activists across Washington.  All Democrats who are willing to face the public during the 2020 campaign need to be asked if they condemn the violence against police officers.  While many members of the media are willing to overlook this significant double standard, the public needs to continue to push our elected leaders and candidates to take a stand on this increasingly important issue. (Q13’s The Divide)

On Wednesday, the Everett City Council may reconsider its previous decision to decline a $6 million federal grant to hire 16 new police officers.  Last week, a motion by Councilmember Scott Bader to accept the grant was not seconded by any other member of the council.  Some councilmembers have since stated they had concerns about the financial obligations of accepting the money. The money is designated to assist in paying most (but not all) of the cost of hiring the officers for three years, but then the city would be responsible for the cost for a fourth year. (Everett Herald)

Following a disturbing countrywide trend, drug overdoses are spiking in Yakima and Kittitas counties, where more than 100 people have died due to substance abuse.  The isolation, financial insecurity, and difficulties entering treatment facilities are all factors in the increase of drug-related deaths.  Initial restrictions on some treatment centers have been lifted, yet many believe the death rates will continue to be above average as long as COVID-19 restrictions are in place.  For those who are suffering, they should know that Narcotics Anonymous and Alcoholics Anonymous Zoom meetings are available.  (Yakima Herald)

Despite the sharp increase in coronavirus cases in Whitman County, where some students have returned to the Washington State University campus, many residents refuse to adhere to health officials’ warnings and continue to break state safety guidelines in Pullman.  The police department said officers issued eight tickets over the weekend to individuals who were hosting gatherings that exceeded the limit of 10 individuals, or where people were not wearing masks. Each violation is subject to a $250 fine. (YakTriNews)

The Clarkston School District is among the 60 (out of 300) Washington State school districts that is allowing students back on campus for instruction.  Clarkston is on the border with Idaho (which has all students back in class), in the Southeast corner of Washington State.  Students are split in two separate shifts and are on campus 2-to-4 days a week for in-person instruction.  If Asotin County coronavirus case numbers increase, then students will return to distance learning.  If the case numbers go down, then students will return full-time to the classrooms. (Seattle Times) 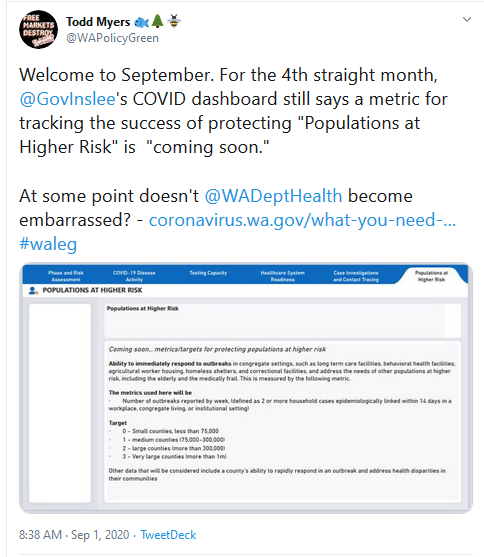 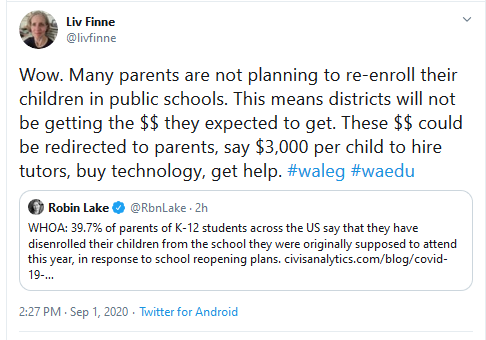