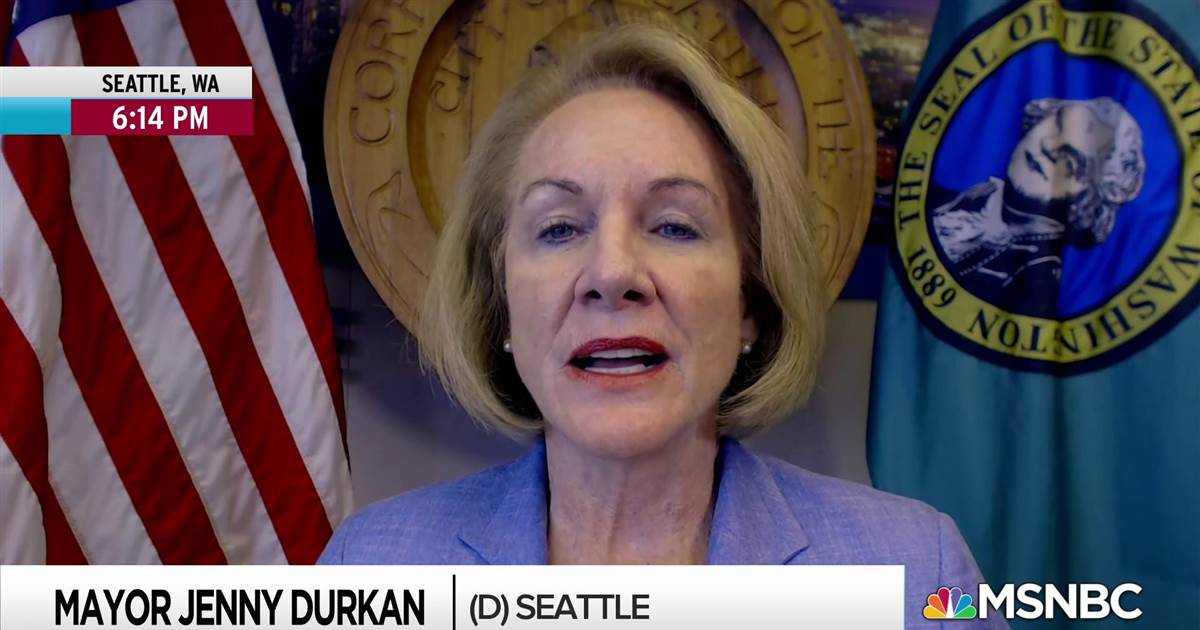 It may sound like we’re on a repeat loop in reminding Democrat Seattle Mayor Jenny Durkan of the truth, but despite surrendering control of a chunk of the City of Seattle to rioters, enduring ongoing protests citywide, property destruction, out-of-control homelessness, and a city that smells like a honey bucket, the mayor still insists on telling national audiences that Seattle is a great place to raise a family.

During the recent Republican National Convention , South Dakota Governor Kriti Noem, singled out Seattle as a place where “The violence is rampant. There’s looting, chaos, destruction and murder”. To anyone who has switched on a radio or TV in the last 4 months, they would agree.

But in her version of an alternate reality, Durkan called into MSNBC and said that Gov. Noem was wrong and stated that instead Seattle’s crime was falling and people are moving to the city. Durkan suggested the South Dakota governor get off twitter and come and see Seattle, something Durkan herself has been afraid to do without a police escort.

In response to Durkan’s bizarre claims, Governor Noem responded on a morning show, “So maybe the Seattle she [Durkan] raised her children in was different years ago, but today, the families that live there, they’re under attack and this is one of those things that we need to have an honest conversation about and really recognize that it comes from lack of leadership, very poor leadership that has its priorities screwed up.”

The reality is Seattle is collapsing on Durkan’s watch. Businesses are leaving the city in droves, the homeless have taken over the downtown core and are using it as their personal latrine, and Durkan, along with the Democrat/Socialist Seattle City Council, are content to watch the city deteriorate around them in the name of “social justice”.

What was once called the Emerald City and heralded as a clean, fun place to live, work and play, is now a politically correct hellhole where wokeness trumps common sense.

You have rampant crime and property looting? No problem says the city council. We’ll just cut funding to the very people putting their lives on the line every day to protect the city. Seattle City Council members seem barely one step behind Chicago in their tolerance of violence. Will they, like Democrat Chicago Mayor Lori Lightfoot, ask for personal police protection from the very same department they just cut jobs from, when the rioters come to their homes?

So, you want to have business development? Great says the council. Let’s create a massive $200 million payroll tax on the biggest employers and most successful employees in town, so they can tell their far-left base that they are punishing Amazon. I’m sure that those businesses will all want to stay and pay more money for less services, particularly for public safety. Unfortunately for Seattle’s tax coffers, maybe not, as some sensible ones are already off to Bellevue.

Maybe Durkan can focus on tourism to save the City, but who wants to come to Seattle when its primary export, since Boeing isn’t selling any airplanes in this cratered economy, is used needles and a bad case of body odor?

Seattle is facing the real proposition that it will not recover from the inactions of its Democrat/Socialist council and mayor (and the silence instead of support for public safety from so-called statewide “leaders” like Gov. Jay Inslee, AG Bob Ferguson, et al.).  No sensible person will want to live and work in a city that can’t keep life and property safe.

The question is, will Seattle voters wake up to the mess Durkan and the council have created and start making some changes at City Hall. There is already a recall effort on the ballot this fall to remove Durkan. This will be the voters first opportunity to stop the insanity, will they?