Most of the media has avoided actually reporting on the serious problems the Democrats face due to the growing ideological chasm in their party. 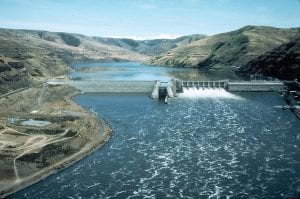 Democrat Governor Jay Inslee and his “green” friends want to cripple Washington’s hydroelectric power system.  Inslee and his wealthy urban campaign supporters in the environmental community continue their efforts to remove the Snake River dams (and their clean energy) from Washington State’s Southeast corner. They are doing this despite a recent federal government study that determined that removing the four dams would destabilize the power grid, increase overall greenhouse emissions, and more than double the risk of regional power outages. Also recent migration counts at the dams reveal that the salmon population is significantly growing. (Click to read full article at Shift and Chinook Counts at Lower Granite Dam)

Governor Inslee will make a rare “public” appearance on Wednesday evening, as he participates in the only debate he would agree to with his Republican challenger, Police Chief Loren Culp.  It should be noted that non-arrogant gubernatorial candidates participate in at least three or four debates around the state, but Inslee’s team needs to reduce the number of false (or just plain nonsensical) statements he makes, so he limited debates to just this one. The governor has avoided any public discussions with Republican legislators during his six months of “emergency orders”, and has only taken a few questions from the media (pre-selected by his staff) during his state-sponsored campaign press conferences.  The Governor is not exactly a shining beacon of democracy with his extended one-man rule and refusal to talk with the public or allowing members of the opposition party have input during a special legislative session. (Seattle Times)

The cost to taxpayers to buy union support for Jay Inslee’s gubernatorial contest just came in: the collective bargaining agreements (CBAs) for the state’s unionized workforce will increase spending for the 2021-2023 biannual budget by $356.4 million.  The CBAs are the result of the secret negotiations between the state employee unions and Governor Inslee (who the unions have supported with millions of dollars in direct contributions and independent expenditures) and were submitted to the Office of Financial Management on October 1st. Currently, there are no pay raises (since state workers received two pay increases in the previous 15 months) and the state will continue to pay 85% of the workers’ health insurance costs. (Washington Research Council)

Republican legislators claim that Governor Inslee and Democrat legislative “leaders” are ignoring the needs of at-risk students by not calling the legislature back into special session to address issues surrounding students returning to the classroom.  One of the significant factors school districts must consider is the state’s liability laws, which former Attorney General Rob McKenna contends could be very costly for school districts.  The liability laws are also a primary reason why Fall prep sports are not allowed to take place. State Republican Senators believe that if the legislature restructured the liability laws, districts would be able to return students to the classroom.  It should trouble Democrats that reports from around the state indicate that a significant number of students (often around 10%) are not participating in online instruction.  Often these are students from low-income households who do not have a suitable computer or internet access.  Thus, by not allowing students to return to in-person instruction, the education gap is widening for at-risk students.  Yet Governor Inslee, the Democrat legislative leaders, and their bosses in the state employee unions are politically motivated to resist holding a special session before the November elections, because they know their remedy for the state’s revenue shortfall (to raise taxes) is not popular with the state’s voters. (KEPR TV and Peninsula Daily News)

Slade Gorton’s former associates at K&L Gates will be holding a virtual memorial for the Senator on Tuesday, October 13th at 11:00 AM – Noon (Pacific Time).  Former U.S. Senate colleagues and local dignitaries are scheduled to speak.  You must register in advance to view the event.  Apparently, there are plans to hold a public event sometime next year, when large crowds are permitted by Governor Inslee to gather again. (Slade Gorton Memorial Service)

The Washington State Department of Agriculture (WSDA) wants to spend an estimated $341,000 to add the word “Food” to its name so that liberal urban residents will understand there is a connection between “food” and “agriculture”.  From the file of “We can’t make this stuff up”, WSDA officials wrote to the governor’s budget office contending that people who live outside of rural Washington believe “we only support large commercial farms that grow commodity crops, destined for the global export market.” By adding “Food” to its name, the department wants to highlight its work on food safety and organic certifications.  The department does seem to overstate its own importance, and the name change’s impact, by proclaiming it will bridge a “growing urban-rural divide.” (Capitol Press)

In a rare admission from the media that there is a growing conflict within the Democrat party, the Seattle Times mentions the obvious divide in a story on the race between two Democrats in the 10th Congressional District.  While the entire political world can see the divide between the “progressives” and the “establishment” Democrats, the local media does not like to report on it for the split for is uncomfortable for liberals to talk about publicly. Even though the ideological chasm has been played out on the streets of Seattle, with progressives protesting against the establishment’s Mayor Jenny Durkan, and also in two separate Seattle recall campaigns, a Washington State Senate campaign in East King County, and in the 10th Congressional race, the media has refused to report on its significance.  The divide is also why Democrat officials like Governor Jay Inslee, Attorney General Bob Ferguson, Representative Kim Schrier and Washington State Democrat Chair Tina Podlodowski refuse to take a stand in defending Seattle police officers against the physical attacks from the rioters (remember Governor Inslee chose to look entirely clueless regarding the takeover of the CHAZ instead of taking a stand against his base that was leading the takeover). If the Democrat politicians stand with the police, then they risk losing progressive votes in November.  If they stand with the rioters, they risk losing “establishment” voters.  And since the media has failed to hold Democrat politicians accountable (as they have when such obvious divides occur in the Republican party), the elected officials don’t have to take a public stand on this very important division. (Seattle Times and Rebecca Perry Twitter)

Snohomish County Executive Dave Somers has sent his budget proposal to the county council, and it includes $500,000 for sheriff officers to be equipped with body cameras.  County Sheriff Adam Fortney supports the proposal, for he believes the cameras will provide “an additional layer of transparency” between the public and law enforcement. (Everett Herald)

Parents on the Sammamish Plateau are upset over the one-sided presentation that was delivered to students over the Black Lives Matters protests.  Parents of students at Skyline High School have expressed concerns about the curriculum that only provides the liberal/progressive/Inslee point of view. (MyNorthwest)

The latest numbers out of Pierce County reveal that a majority of the new coronavirus cases are among younger individuals, as they often fail to adhere to social distancing measures and regularly do not wear face masks.  The Pierce County Health Department reports that 17.5% of new cases in the past two weeks are from those under the age of 20, and 39.5% are those between the ages of 20 – 39. (News Tribune)

The three members of the Douglas County Commission sent a letter of commendation to the county’s Horticultural Pest & Disease Board Director for his “expedient efforts” and “professionalism” in tracking down all the maggot-infected apples which Governor Inslee brought into Central Washington.  The letter noted that if the contaminated apples were not removed, they could have had “significant impact on the fruit industry in Douglas County.” Hopefully someone who knows something about agriculture has since been added to the governor’s staff, as that basic knowledge was clearly lacking before he took his “presents” to Central Washington. If only Governor Inslee could find someone like former Congressman Jay Inslee, who represented the area and would know the harm such a photo-op stunt could cause. (KPQ Radio)

The operator of the Yakima Speedway says he is expecting to be fined by the state for allowing 2,000 people to attend races on Saturday evening.  Speedway owner Doug Bettarel said he would do it again for he claims he has incurred significant debt during the six months in which he has been closed.  All in attendance had their temperature taken upon entering the stands and no concessions were sold.  Yet photos of the crowd showed many groups sitting close together and most were not wearing masks.  Bettarel held a political rally for Loren Culp after the races, on the chance this might deter him from being assessed a fine since Culp held an event in May at the speedway that escaped penalties. (Yakima Herald) 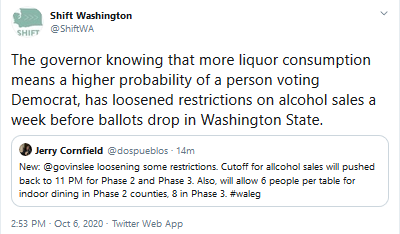 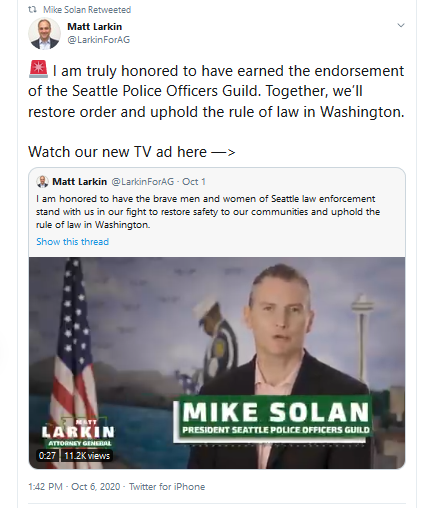