Cyrus Habib and Governor Inslee have kept from the public that the Lt. Governor moved to California in September and is no longer keeping his commitment to Washington State residents.

“(Inslee’s) blatant pandering to the extreme left… He calls the state’s public safety system, built and reinforced by his Democrat gubernatorial predecessors over the last 35 years, full of systemic racism, unsafe law enforcement practices, and just not equitable.  And his criticism is not just limited to law enforcement. According to Inslee, education, healthcare, housing, and other areas are all flawed and are in dire need of reform. It’s amazing that Inslee would even want to belong to a party that has overseen such racist developments over the last generation.” (Shift Article)

Democrat Lt. Governor Cyrus Habib moved to California (and stopped taking salary) in September, despite his term not ending until January.  Even though he is a heartbeat (or plane ride out of state) away from being governor, Habib decided to start early on his next career in the priesthood, instead of completing his obligation to the Washington voters who elected him.  It is surprising this has been kept secret from the public by Habib and his staff.  Governor Inslee has also kept this a secret since mid-August, but it wasn’t like he was asking Habib for any help during the pandemic. This is the lack of transparency that we can expect from the one-man, one-party rule that controls our state government. If only such secret behavior bothered the media enough to get them to challenge the Democrats on their behavior, instead of endorsing all of them for re-election. (AP/Everett Herald)

A new report from the Washington Policy Center reveals that even if Governor Jay Inslee and the legislature were to reduce state expenditures by $2 billion to balance the budget, spending would still be increased by 16% over the last completed budget (2017-2019).  This good financial news does not comfort the Democrats, as both the governor and liberal legislative leaders are indicating that they plan to raise taxes on already hard-hit Washington residents to afford even higher government spending. This fiscal irresponsibility reverses what Democrat governors in the past (Locke in 2002 and Gregoire in 2010) elected to do when faced with similar budget deficits, which was to prioritize government spending and reduce waste rather than jam through new taxes. (Washington Policy Center)

An article titled “Governor Inslee, or King Inslee?” from the Freedom Foundation states that the governor has signed 349 proclamations since his state of emergency declaration on February 29th. His one-man rule is now in its eighth month, as the governor (and Democrat legislative leaders) have stubbornly refused to call a legislative special session to responsibly address the state’s budget deficit. Prior to 2020, Governor Inslee had signed 77 proclamations in his first 7 years in office, and, ironically, 10 of them were to call for a special legislative session. (Freedom Foundation)

Seattle restaurants were featured in the New York Times – not for their world class menus, but for the disastrous impact of Governor Inslee’s shut down orders and the extreme city and state policies which have forced them to close (of course the liberal beacon NYT doesn’t state it that way).  While many of the region’s top restaurants have shut down (11 of Tom Douglas’ 13 establishments are still closed), others have attempted to keep their employees working by trying different business plans (Canlis began selling takeout gourmet burgers, for instance). Yet it is not just the impact of COVID-19 emergency orders which have hurt local eateries, for customers have also stayed away due to the increased prices caused by ultra-liberal wage and benefit laws, and the unsafe environment in the city thanks to the ceaseless (and unpunished) protests and riots going on.  (New York Times)

As Downtown Seattle seemingly continues its downward spiral towards a modern-day ghost town, Gene Juarez Salons and Spa announced it has closed its flagship downtown store after 22 years at the location.  Without stating the obvious reasons why the employer made the decision to permanently close the location, the company’s Chief Operating Officer simply stated, “It was an incredibly difficult decision.”  The spa’s 6th and Pine location is in the heart of the downtown retail core, which has been the center of many recent violent protests. Many nearby shops and restaurants remain closed and boarded-up.  (Puget Sound Business Journal)

Seattle’s failed homeless policies and its recent decision to dismantle Navigation Teams has led to encampments in neighborhood parks and elimination of places where children can safely play.  The city is unable, and unwilling, to respond to the neighborhoods concerns coming in as citizens complain.  An increasing number of residents believe they are being abandoned by their elected officials, who are more concerned about placating the demands of violent protesters than in serving homeowners and families.  (Denny Westneat, Seattle Times)

Depressed yet – here is more news regarding the region’s failed homeless policies, as the King County Council voted to raise taxes to spend even more money to shelter those living on the streets.  Despite the millions (billions?) state and local governments are currently spending to bring people in off the streets, the problem keeps getting worse. The King County Council voted to raise the sales tax (Councilman Reagan Dunn was the lone vote against throwing more money away) to pay for “temporary” housing and more programs. Maybe if King County homeless officials were not spending tax money on bringing trans-gendered strippers from Spokane to entertain staff at homeless conferences, they could develop solutions to the growing and never-ending problem of homelessness in the region. But then again, as we have seen repeatedly, a Democrat-run government has no incentive to solve the homeless problem.  In fact, as the council’s tax vote demonstrates, county government gets bigger and more domineering the worse the problem becomes.  (MyNorthwest and Seattle Times)

The Whatcom County Council caved into the greedy demands of government employee union bosses and voted to withdraw a proposal to serve the public by not holding future labor negotiations behind closed doors.  The unions, which lavishly contribute to Democrat officials’ campaigns, want to keep the negotiations private to squeeze the most out of those they have financially supported, without embarrassing the Democrats in public for their corruption.  Elected officials often go along with the union bosses demands, because why would they bite the hand that feeds their campaign coffers and keeps the liberal machine humming?  (The Stand)

Snohomish County health officials have instructed school districts to freeze their plans to bring students back into class, due to the increase of COVID-19 cases in the county.  Schools can continue to instruct students who have already returned, but they have been told to not bring more students back onto campus. Everett Herald)

Central Washington residents were pleased to learn yesterday that Governor Inslee decided, the same week the ballots were being mailed to voters, that he was no longer following his stated goals for reopening the state. That meant that five counties (Benton, Chelan, Douglas, Franklin, and Yakima) were finally able to move to Phase II in the state’s reopening plan. This will allow businesses (including restaurants and bars) to allow more capacity (50%) and movie theaters can open to 25% capacity.  Local officials give credit to residents adhering to health and safety guidelines, and their contacting the governor’s office to request the change in status. (Yakima Herald)

First-year Spokane Mayor Nadine Woodward outlined her goals for the next 100 days in her initial Annual Mayoral Statement of the Conditions and Affairs of the City presentation, which she gave virtually to the Spokane City Council.  Included among her objectives are reaching a contract agreement with the Spokane Police Guild, developing a broader coalition of local governments to assist the local homeless population, and moving the county into Phase III. (Spokesman Review)

Bob Ferguson’s latest fundraising email demonstrates again that our state’s Attorney General spends most of his day watching MSNBC to learn national Democrat talking points, rather than focusing his attention on issues important to residents of Washington State.  This week Ferguson has been making daily tired and predictable partisan attacks on an extremely well-qualified U.S. Supreme Court nominee, even while he preserves his “right to remain silent” about the lawlessness and physical attacks on police officers that continues to make news in Washington State.  Ferguson is the state’s chief law enforcement officer, making it incredibly disturbing that he has not supported Seattle police officers as violent protestors have attacked them with baseball bats, targeted them with Molotov cocktails, and attempted to burn police alive by sealing them in a building which they set on fire.  While sending press releases and posting tweets on nearly everything President Trump says, Ferguson has remained silent as his fellow Democrats on the Seattle City Council threatened the public safety of its 775,000 residents by voting to carelessly defund the Seattle Police Department. (Ferguson’s on-going silence over these important matters is why the Seattle Police Guild has chosen to support Republican candidate Matt Larkin over the incumbent.) Our attorney general is clearly demonstrating that it is easy to criticize the actions of one’s enemies, yet it takes courage to condemn the actions of one’s friends. (Ferguson fundraising email and YouTube/Matt Larkin television ad)

The latest email from Beth Doglio’s campaign proves Democrats do not need a Republican in the race to spew hate against their opponent.  In the 10th Congressional District race, far Left-wing candidate Marilyn Strickland is competing with the extremely far Left-wing candidate Beth Doglio to replace Denny Heck in Congress.  Both campaigns have hurled accusations and insults at each other since the August primary.  In the latest attack from Doglio’s campaign, she accuses Strickland of not caring about children and said that the former Tacoma mayor was “willing to sell out the city of Tacoma to the highest bidder.” (Doglio campaign fundraising email) 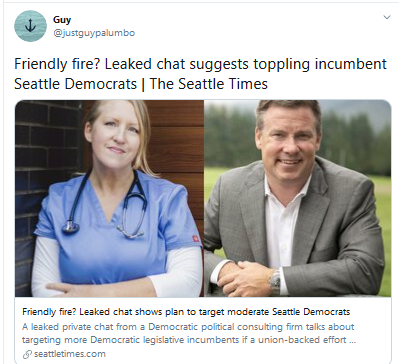