The Inslee administration is refusing to show the public the state’s cash balance forecast.

Governor Jay Inslee’s administration has stopped publishing the state’s General Fund cash balance forecast, so he can hide the fact that he is not following state law requiring him to call a special session (or make across-the-board cuts) whenever a state fund shows a deficit. Inslee’s Office of Fiscal Management (OFM) responded to inquiries about stopping publication of the forecast by stating, “We don’t see a need to update it at this time, primarily due to the state’s improved revenue forecast and a variety of anticipated savings in the current budget.” Yeah, right. Apparently, Inslee’s OFM just wants to hide from the public the “state’s improved revenue forecast.” Or, the bureaucrats want to hide from the public the “Jay Inslee deficit” the state is illegally running right now, because he has a campaign going on. The absence of media attention to this lack of transparency from Governor Inslee’s team is yet another example of the local media’s refusal to inform the public of Inslee’s obvious failures and the length he will go to not call the legally mandated special session of the legislature before the November elections. Kind of makes you wonder how reporters might treat a Republican who refused to follow the law or release budget information. (WPC Center for Government Reform Facebook post and Shift Article)

Governor Inslee has extended the state’s eviction moratorium until the end of the year because that might help him get some votes, while landlords say they are tired of bearing the financial burden imposed on them by a governor without a clue about the economic hardship his random orders are causing.   Many landlords only own one or two properties, and the lack of rent payments is forcing them to consider some painful decisions, like selling their property.  One landlord spoke about a state worker who was still receiving a paycheck, yet used the moratorium as an excuse to not pay his rent.. (Q13 News)

The Washington State Department of Agriculture failed in its second attempt to place a tracking device on a “murder hornet” to help find and destroy its nest.  In September, state entomologists used glue to attach a tracking device to a captured hornet, yet the device fell off and the hornet could not fly.  Last week scientists used dental floss to attach the tracker, yet lost the signal when the female hornet flew into blackberry bushes.  Thus far, 18 hornets, which can quickly decimate a honeybee hive, have been found along the Canadian border. (Seattle Times)

A study from a Brown University economist reveals “Predictions about school openings hurting the broader community seem to have been overblown.”  Data collected from across the country has shown that the COVID-19 infection rate among students is only 0.13 and among teachers it is 0.24.   It is important to consider that both students and teachers were infected at approximately the same rate when instruction was through online distant learning and not in-person.  The conclusion of the study is that “the evidence is pointing in one direction. Schools do not, in fact, appear to be a major spreader of Covid-19.” But, since the teachers unions won’t allow Jay Inslee to order schools to open, scientific research doesn’t matter. (Route Fifty)

Twitter has agreed to pay $100,000 to Washington State for failing to keep records on political advertising on its site.  This follows Google and Facebook paying $200,000 each for also failing to keep records of political spending on Washington State candidates and issues. Of course, candidates and campaigns are required to report the spending anyway, and the state never tried to claim it didn’t have the information it wanted, so with no harm to the people of Washington State this amounts to nothing more than a shakedown by Attorney General Bob Ferguson. If he really cared about government transparency, perhaps he could tell OFM to issue its report on whether the state was running an illegal “Jay Inslee deficit” right now. (News Tribune)

Earlier today, Slade Gorton’s colleagues at K&L Gates held a virtual memorial for the former Washington State Attorney General and United States Senator.  A bi-partisan collection of dignitaries honored the statesman who passed away in August, at the age of 92.  Former Governor Christine Gregoire spoke of how Gorton “broke the glass ceiling” by leading the country in hiring women (like Gregoire) to serve in the Attorney General’s office. Congresswoman Jaime Herrera Beutler spoke about how Slade mentored her after he left the Senate, and “showed what it is like to never retire from serving your country.” An in-person memorial is currently being discussed for some time next Spring or Summer.  Financial remembrances can be made by donating to the Slade Gorton International Policy Center. (Gorton Center)

Far-Left Policies at work: The City Council eliminates funding for Navigation Teams charged with serving the homeless community, so there has been a significant increase in the number of homeless encampments in Seattle neighborhoods.  The Seattle City Council rushed to overcome its past racism and fulfill every demand of the anti-police protestors who had such fun in city streets this summer.  One of its attacks on public safety was to cut off funding for the program.  The Navigation Teams were created in 2017, as a part of disgraced former Mayor Ed Murray’s expensive response to the “homeless crisis,” and consisted of Seattle police officers and social services employees attempting to assist the homeless.  Ultra-liberal activists became critical of the Navigation Teams because, along with helping those without shelter, the teams also enforced some city health and safety laws, which went against the Far Left’s desire for a city without laws. (KIRO-TV and City of Seattle Navigation Teams)

A spirited race for Pierce County Sheriff is being waged by two longtime members of the department who have both received criticism for recent actions.  One candidate, department spokesman Ed Troyer, has been criticized for comments related to Manny Ellis’ death while he was in police custody.  His opponent, Lt. Cyndie Fajardo, led a drug unit that has been accused of falsifying records to protect an informant. In the August primary, Troyer received 52.21% of the vote while Fajardo came in second with 19.58%. (News Tribune and Pierce County Elections)

Many local cities are extending their “steatery” programs into the Fall months, to assist local restaurants which are struggling financially due to Governor Inslee’s random “emergency orders.”  The program allows establishments to use sidewalks and parking spaces to provide more space to serve customers.  While “streateries” were established during the summer months, many restaurants are now using tents and outdoor heaters as colder weather arrives in the Pacific Northwest. (Everett Herald)

In breaking news, the Central Washington counties of Benton, Chelan, Douglas, Franklin, and Yakima have finally been moved out of the “modified Phase I” they have been in for months.  The five counties have all been moved to Phase II by state officials this afternoon.  The move will allow for a slight increase in commercial and social activities and allow for marginally larger gatherings. With ballots dropping this week, it makes some wonder if the reclassification was not politically motivated.  (Yakima Herald)

All the maggot-infested apples Governor Jay Inslee brought into Eastern Washington have been located and properly disposed.  The governor cluelessly brought the contaminated apples into Eastern Washington when he needed a state-funded photo opportunity for his campaign and visited communities devastated by the wildfires. The governor later sort of apologized for his ignorance (and seemingly blamed his wife for the error) and said the incident was “a good reminder of the importance of awareness around apple quarantine.” Most people familiar with the importance of the tree fruit industry to the state’s economy don’t need to be reminded of quarantine restrictions. (Spokesman Review)

King County Executive Dow Constantine is attempting to get more Seattle liberals to financially support a Pierce County candidate for the State Senate.  In the latest example of Seattle liberals wanting to spread their destructive and failed policies to the rest of Washington State, Constantine is hosting a virtual fundraiser for T’wina Nobles, a far-Left state senate candidate in Pierce County’s 28th Legislative District.  The voters in the suburban district, which borders Joint Base Lewis-McChord, will certainly be pleased that the Seattle politician who handed out facemasks to protestors just before they began setting fires and breaking windows in downtown Seattle last summer, and whose administration thought it was a good use of taxpayer money to hire a transgendered stripper to perform at a conference on homelessness, wants to spread his policies to their community. (Dow Constantine email) 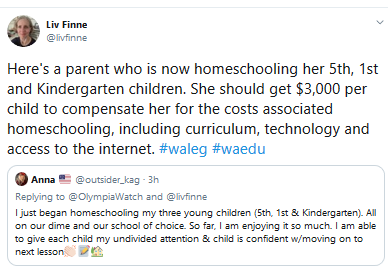 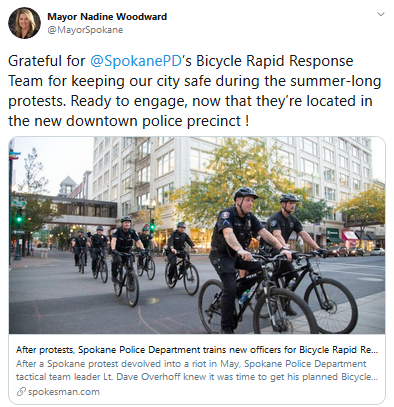 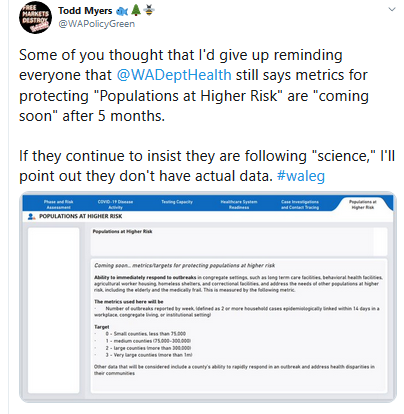