Even a group of Democrat legislators believe Governor Jay Inslee has gone too far with his latest attacks on small businesses.

Governor Jay Inslee uses data from the shutdown of the hospitality sector last Spring (before restaurants and bars were observing current safety guidelines) to justify why he is again attacking the industry.  Yet, Washington State restaurants and bars are now adhering to the most comprehensive safety protocols in the country, and the state’s Hospitality Association claims that three separate studies have found that restaurants and bars were the cause of less than one half of 1% of current COVID-19 infections.  A spokesman for the industry argue that having the restaurants and bars safely serving customers indoors is safer than not having this option available.  With safe indoor service unavailable, restless people will gather in locations where safety measures are not followed.  The spokesman pointed to the explosion of coronavirus cases that hit college campuses across Washington State when students gathered in dorm rooms and fraternity houses.  The governor and his staff continue to claim that scientific data is driving his random decisions, yet the “data” they are using is old and does not represent current conditions. You would think that Jay would work a little harder on a justification for causing over 100,000 people to lose their jobs during the holiday season. (TVW)

Even a group of Democrat lawmakers believe Governor Inslee’s restrictions on restaurants and bars are too severe.  A group of nine Democrat legislators sent the governor a letter stating, “the impacts of this specific measure will leave lasting holes in the economic and cultural fabric of every community across the state.” (Everett Herald)

The Washington Retail Association say that its leadership has been meeting with the governor’s staff and state health officials, but that Governor Inslee has ignored their advice and concerns.  While retailers have gone through the expense of installing plexiglass, increasing their cleaning procedures, and purchasing masks and other safety equipment to increase the number of customers they can serve, the governor has disregarded these “data” points, and decided to reduce store capacity to 25% during the holiday season.  Retailers contend that the nature of their business keeps people from standing close to each other for an extended period while shopping.  Yet, retailers have found that when stores restrict capacity, waiting customers form lines where they are in close contact with others for long periods, thus increasing the opportunity to spread the virus.  Governor Inslee has said the state will set aside $50 million to help retailers who are being financially impacted by his decision, though that promise is of dubious legality since the governor is not allowed to appropriate money without legislative approval.  Retailers contend this is a “drop in the bucket” to relieve the damage Inslee’s latest attacks on their industry will cause.  The $50 million state expenditure means that only 5,000 businesses can receive $10,000 grants, but there are 600,000 small businesses in Washington State. If only the retailers had done what the state employee unions have done, and given millions to Inslee for previous campaigns, they too could receive a pay increase from the state in the middle of a pandemic. (MyNorthwest and Shift)

While Governor Inslee continues to ignore the needs of employers and workers impacted by his recent attacks, his partners in the Democrat-only Western States Pact are calling for a special legislative session to assist their businesses.  Yesterday we reported that Oregon’s Democrat Speaker of the House is calling for a special session to help its state’s retailers, and today we learn that Colorado is seeking to do the same. Many Washington State businesses shut down for good during Governor Inslee’s initial “emergency orders”, while others were just starting to recover when he surprised everyone with his latest strict restrictions were revealed last weekend.  When Governor Inslee announced the Western States Pact (which excludes Washington’s neighbors Idaho and Alaska because they elected Republican governors), it was proclaimed that the Pact “agreed to work together on a shared approach for reopening our economies.”  As we have seen on numerous occasions, this is not true, as Washington’s employers and workers have consistently suffered far more severe “approaches” than their counterparts in other states. (Washington Policy Center and Governor Inslee’s Press Release)

Recently disclosed internal emails show that the Democrat legislators passed HB 1888 last session not to protect the “privacy” of state employees, as they said publicly at the time, but was really intended to keep the flow of union dues money going into their campaigns.  After the 2018 U.S. Supreme Court’s Janus decision, unions were no longer able to automatically steal money from workers’ paychecks to fund their far-Left political activities.  That’s when the Freedom Foundation, a free-market think tank, started using public information to contact state employees and inform them of their rights to stop unions from automatically taking money out of their paychecks.  Union bosses became nervous over the loss of dues revenue that the Foundation’s efforts were causing, and leaned on Democrat lawmakers to pass HB 1888 to stop making state employee birthdates publicly available  (the bill was amended to provide media members special access to information which the public is now prohibited from seeing).  While legislators said they were passing the legislation to protect government workers’ “privacy”, the newly disclosed emails from Democrat legislators and staffers indicate their primary concern was to obstruct the Freedom Foundation’s efforts and protect the union cash flowing into their campaign coffers. (Freedom Foundation, Smarter Government Washington, and Washington Legislature Bill Summary)

The News Tribune has joined the chorus of newspapers calling on Governor Inslee to convene a special legislative session to assist state retailers and public sector workers impacted by his latest random restrictions.  Unfortunately, the governor has proven he is tone deaf to any chorus that is not sung by liberal special interest groups who give him campaign cash.  The News Tribune states Inslee needs to “expand his bubble of decision-making input.” (News Tribune)

After an advisory committee split on whether to replace or repair the damaged West Seattle Bridge, Mayor Jenny Durkan has finally decided to do her job and make a decision to repair the bridge.  The cost for the repair is estimated at $47 million (as opposed to an estimated $500 million to replace the span), with completion some time in 2022 (if you believe government estimates about such things).  Durkan said she will also begin working with other agencies to build a new span that will serve light rail, personal vehicles, freight and bicycles that will be open “early 2030s.” (Seattle Times)

Councilman Reagan Dunn, one of the few remaining reasonable voices in King County government, will be holding a virtual kick-off for his 2021 campaign on the morning of December 3rd.  The Zoom event will include appearances by Congresswoman Jaime Herrera Beutler, former Washington State Attorney General Rob McKenna, and KVI Host John Carlson.  Suggested donation is $40. (Reagan Dunn Campaign)

The Seattle City Council has decided to raise car tabs another $20, but has not decided what to waste it on just yet.  The fiscally irresponsible body loves the idea of taxing residents even more (and making it even more expensive to live in the city), but they just cannot figure out whose pet projects should receive someone else’s money.  Supporters for bike paths, walking paths, and transit are now fighting over who should receive the money – but nobody who wants to drive to work (or school, or shop, ect.) should bother asking for any help. (Seattle Times)

Elected officials from Kennewick, Pasco, Richland, West Richland, Benton County and Franklin County have signed a letter to Governor Inslee stating that his recent restrictions on businesses are not the right approach to combat the coronavirus.  Since most of the recent infections have taken place at private gatherings, the local officials argue Inslee’s actions unfairly punish businesses and workers who have already suffered financially under the governor’s previous random orders.  Some of the officials offered harsh assessments of the governor and his new restrictions.  Richland Councilman Bob Thompson said of Inslee, “He doesn’t care about the people. He likes to be a ruler. He’s lost his moral authority.” (Tri-City Herald)

Congressman Dan Newhouse announced via Twitter that he has tested positive for COVID-19 and that he has quarantined himself.  The Central Washington representative, who was just elected the Chairman of the influential Western Caucus in the House, said he will continue to work remotely while in isolation. (Twitter)

The Washington Education Association spent millions of dollars attempting to buy the 2020 elections.  As Shift’s article states, “For the Washington Education Association, it’s not about our children’s education; after all, kids do not pay union dues. It’s about more money for the union and more money for their Democrat friends in office who can keep the gravy train running the WEA’s way.” (Shift Article) 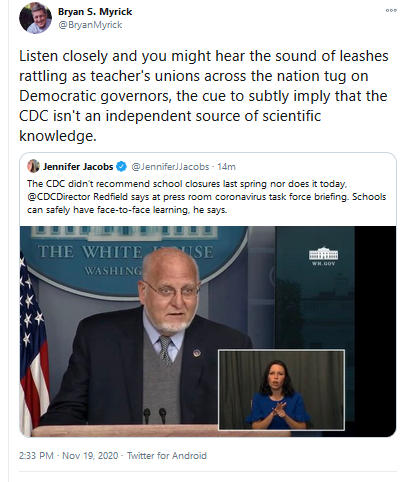