All along, the Democrats’ plan was to undemocratically remove the public and Republicans from the redistricting process and waste millions in taxpayer money in the process.

Paul Queary of the Washington Observer reports that the last-minute confusion and the failure by the Washington State Redistricting Commission to complete its tasks prior to Monday’s deadline was planned in advance by the Commission’s Democrat appointees, to completely remove the public and Republicans from the process and allow the liberal members of the Washington State Supreme Court to determine the boundaries of the state’s 10 congressional districts and 49 legislative districts.  This undemocratic strategy by the Democrats was predicted by many and confirmed by Queary’s reporting.  Queary (a longtime AP reporter) stated he spoke with those involved in the process and the Senate Democrats’ appointee (and former two-term 43rd District Democrat Representative) Brady Walkinshaw was the primary obstructor, using odd last-minute requests to delay the final vote past the Monday midnight deadline.  Walkinshaw made these requests behind closed doors and thus, according to Queary, displayed “contempt for the Open Public Meetings Act.”

Queary asserts “a bipartisan redistricting process was subverted for partisan gain and transferred to a Supreme Court whose members were nearly all appointed by Democratic governors. Significant amounts of the taxpayers’ money have been squandered. Regardless of which jersey you wear in this game, it’s not a good look.” To many, this is just another in a long string of undemocratic tactics used by Washington State’s majority Democrats, who consistently fail to respect basic democratic principles.  (Washington Observer and Shift)

Representative Andrew Barkis (R – Olympia), the Ranking Republican on the House Transportation Committee, says he will introduce legislation which will raise $3.2 billion per biennium for transportation projects without raising taxes.  Representative Barkis’ plan is called the REAL (Reprioritizing Existing Appropriations for Longevity) Act and it would take surplus revenue from the state’s general fund and from the sale of vehicles, to use for completion of long-standing highway projects.  Representative Barkis said his plan is to stop the never-ending tax increases (especially on gas, since Washington State already has one of the three highest tax rates in the country) and “is our pathway and opportunity to rejuvenate our way of thinking and move away from the antiquated and obsolete way of state budgeting.” (Elkhorn Media Group and the Tax Foundation)

As liberal anti-police measures at both the state and local levels have resulted in a dramatic increase in violent crimes, more Western Washington residents are taking actions, including buying guns, to protect themselves.  Seattle alone surpassed the record number of reported violent crimes in 2020 (4,439) in early November, with more than a month-and-a-half remaining in 2021. Self-defense classes are seeing an uptick in registration and many local gun shops are seeing a large increase in the number of first-time gun owners.  Tiffany Teasdale, a Lynnwood gun shop owner, described the reasons behind this recent surge, “With less officers on the streets, and longer response times so it makes people think, ‘Well, maybe I should find a way to defend myself instead of waiting for somebody to defend me.’” (KOMO News)

The Seattle Public Schools (SPS) board voted unanimously to “urge” the Washington State Department of Health to “review” adding the COVID-19 vaccine to the list of immunizations students must have to attend public school.  In Washington, school districts do not have the authority to require a vaccine to attend school, only the state does.  (This leads to the question: will Governor Jay Inslee allow legislators to be involved in this decision which impacts every current and future child in the state? Or will he continue his undemocratic one-man rule of the state and deny any alternative views to be part of the process?)  Responding to the many anti-vaccination protestors who have attended recent board meetings in which vaccination was scheduled to be discussed, board member Liza Rankin flippantly dismissed their concerns by stating, “you do not have to participate,” and that no one is forcing parents to send their children to public schools.

Annual SPS enrollment dropped by 3% (1,300 fewer students) in the current school year, due primarily to parents concerns over the district’s poor response to the COVID pandemic. This decline will result in a $28 million loss in state/federal funding for the district.  A recent Kaiser Family Foundation nationwide survey found that 30% of parents stated they would “definitely not” immunize their school-aged child, primarily because not enough is known about the long-term effects of the vaccine on children. (Seattle Times and KING5 News)

The Mill Creek City Council unanimously voted to accept a separation package with its City Manager, who has been the source of controversary during his three years in office.  City Manager Michael Ciaravino stated the reason for his departure was to deal with family issues in Ohio. The agreement, which has yet to be made public, was worked out during a closed-door meeting with the councilmembers.  Ciaravino has had conflicts with the union which represents some of the city workers and with the city’s police guild. Some of the councilmembers were growing concerned about the mounting legal fees needed to defend the city in lawsuits filed by former employees against the city manager and city. (Everett Herald)

A new report from the Washington Policy Center examines why Governor Inslee does very little to assist salmon recovery in Puget Sound, where the Chinook salmon population has remained consistently low for more than 20 years, yet he appears committed to incredibly expensive proposals to tear down the clean-energy producing Snake River dams, where salmon runs are steadily increasing.  Despite many state and federal studies which have determined that tearing down the Snake River dams would do very little to increase the number of salmon and recent salmon counts at the dams which demonstrate a steady rise in the salmon numbers, the governor (along with Senator Patty Murray, who is up for re-election in 2022) have committed to yet another study in which the conclusion (i.e. to tear down the dams) appears already to be determined.  Yet on the West side of the state, the governor does very little to protect salmon despite a new study from the Puget Sound Partnership which finds that Puget Sound Chinook salmon “remain at historic lows and have not experienced significant population changes since they were listed in 1999.” The WPC report concludes that the governor is ignoring the facts and science because “the pressures of politics and fundraising will override those science-based conclusions.” (Washington Policy Center and Twitter)

Increase private use of security cameras helped the Yakima Police Department solve all of its murder cases in 2021.  Yakima’s SafeCam programs allows residents and businesses to register their outdoor surveillance cameras with the police.  This provides detectives with a map of all known cameras which make it easy for them to contact the owners and ask to see footage near crime scenes. (YakTriNews)

Socialist Seattle City Councilmember Kshama Sawant repeatedly labels the Seattle Times as “sexist” yet provides no evidence to support the allegation in her latest fundraising email.  The subject line of the email states “This week the Seattle Times published a sexist, anti-worker editorial supporting the right-wing recall.” In the email, the Sawant campaign states the Times “outdid even their previous efforts by publishing an outrageous piece littered with sexism.” Yet, nowhere in the email is the sexist content of the Times’ editorial supporting Sawant’s recall identified. We are confident that the Seattle Times editorial page editor Kate Riley is certainly curious as to why she is suddenly a “sexist.” 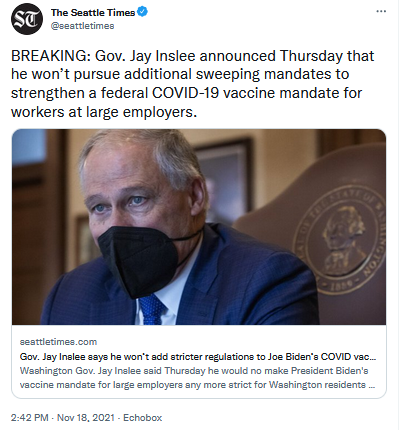 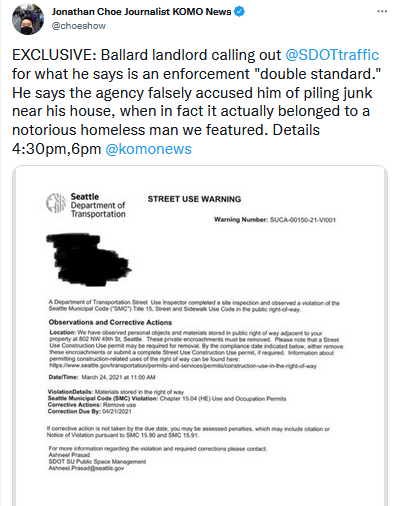 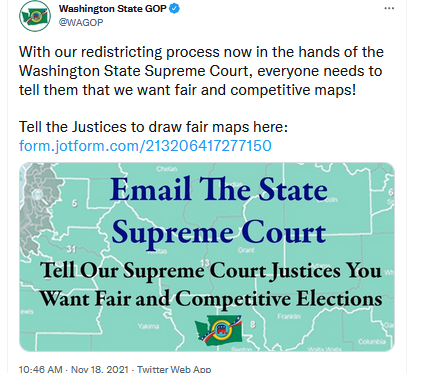 Did you appreciate the perspective?