Happy Veterans Day to all who have served – especially to those who have continued to serve our communities by working in local law enforcement. Thank you, and your families!

If Governor Jay Inslee is provided the opportunity to join the Biden Administration (which is a long way from a certainty), and break yet another promise to Washington State voters, it is generally agreed he will leap at the chance.  Should Inslee bail out, Lt. Governor-elect Denny Heck will become temporary Governor and a special election will be called to fill out the remainder of the four-year term. Many of the state’s major political players, from both sides of the aisle, will be eyeing the race.  Shift provides the first breakdown on who might be running to become our state’s next governor. (Shift Article)

Insurance Commissioner Mike Kreidler (who was just re-elected to his sixth term) has proposed to Governor Inslee the formation of a new state office dedicated to preparing the state for future emergencies. The Disaster Resilience Office would oversee the state’s effort to prepare and limit damage from many natural disasters.  The office would start with a relatively small annual budget of $650,000, but will quickly double in size in the second year. Kreidler hopes the legislature will pass an appropriation for the new office during the 2021 session. (News Tribune)

Incumbent Senator Mark Mullet has extended his lead, over fellow Democrat challenger Ingrid Anderson, to 99 votes in their hotly contested 5th Legislative District contest.  Just a small handful of votes remain to be counted, and Mullet has been gaining votes since election night.  Even though an automatic recount will likely be required, it does appear Senator Mullet has withstood the $1.3 million attack by the Washington Education Association, and other government employee unions, because he stood up against some of their greedy tax proposals). (Secretary of State vote tabulations and Washington State Public Disclosure Commission reports)

What a return on investment! After $41.2 million was spent on Washington State legislative races this cycle, it appears the partisan splits will remain the same as before the election.  The House of Representatives will have 57 Democrats and 41 Republicans, while the Senate will again have 29 Democrats and 20 Republicans (with Democrat Tim Sheldon expected again to caucus with the Republicans, to make 4 the magic number to stop bad bills in that chamber). Public Disclosure Commission reports show that legislative candidates combined spent $26.5 in 2020 – so far – and independent groups spent $14.7 million to influence the vote. (Spokesman Review)

Newly elected Pierce County Sheriff Ed Troyer is opposed to having his county follow the lead of King County, and taking the election of the county’s chief law enforcement officer away from the public and giving it to the Pierce County Council.  In responding to an editorial in the News Tribune, which called for the council to appoint the sheriff, Troyer said, ““Bad things that happen in King County spread. But you have to remember our editorial board for the News Tribune came from Seattle newspapers in King County, so they brought that mindset down with them. And if you look at the comments by the story, most of them are negative against the News Tribune, and I don’t think the voters in Pierce County would ever give up their right to elect a sheriff.” (MyNorthwest and News Tribune)

The Democrats’ true “secret sauce: Blend some liberal anti-Boeing labor policies, add a heaping helping of the City of Seattle’s government-imposed wage scales and regulations, and top off with Governor Inslee’s anti-business emergency orders which have devastated the state’s food service industry, and you have a recipe to close yet another Seattle Institution.  Randy’s Diner, next to Boeing Field, announced that it will be closing this weekend after nearly 40 years in business.  Co-owner Lucia Roadenizer said, “We lasted as long as we could.” (Seattle Times)

A Zoom event with the two candidates who are seeking to become the next Edmonds Police Chief was interrupted three times by individuals posting lewd pictures and making racist comments.  Edmonds Mayor Mike Nelson said he has asked the FBI to provide cyber tracing to track down the perpetrators. (Everett Herald)

The Port of Olympia will be auctioning off a former Washington State ferry next week with an opening bid of $50,000. The previous owner was unable to make payments on the vessel and the port took ownership earlier this year.  According to a port spokesperson, seven individuals have inspected the ferry and two or three of them appear to be serious about making a purchase. (The Olympian)

The nest of Asian giant hornets removed last week near Blaine was much larger than originally estimated.  Washington State Department of Agriculture entomologists announced that the nest contained over 500 hornets and 200 queen bees. Most of those queen bees would be expected to leave the nest and start their own colony, which would have been devastating to local bee populations. The search continues for more nests near the Canadian border. (KING5 News)

The Richland School District is requiring parents to fill out a daily health form before allowing the student to participate in classroom activities.  Parents must state in an online form that their child has shown no symptoms of the coronavirus and has not been exposed to anyone with the virus.  If a child arrives without the form being filled out, then the student is separated, and the parents are contacted.  (YakTriNews) 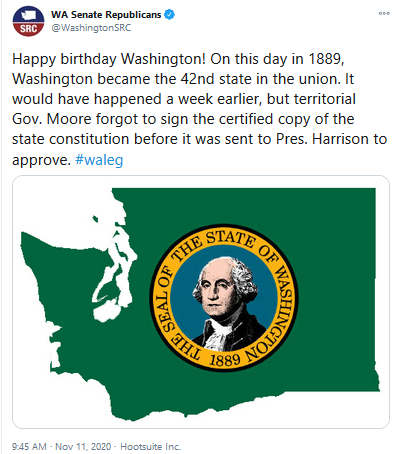