The Washington State Supreme Court ruled that Governor Inslee “exceeded his authority” when he issued partial vetoes of the 2019 transportation budget.

The Washington State Supreme Court ruled today that Governor Jay Inslee overstepped his veto authority in 2019, when he made partial vetoes of the transportation budget passed by the legislature.  In a 7-2 decision on the lawsuit against the governor filed by the Washington State Legislature, the court wrote, “Governor Inslee exceeded his article III, section 12 veto power” when he struck down “a valid legislative limit on an executive agency’s expenditure of appropriated funds.” Thus far, the governor’s office has refused to comment on the court’s decision. Maybe he doesn’t want to be bothered while attending fancy receptions at the COP26 summit.

Olympia insiders now are waiting to see if today’s court ruling will expedite the lawsuit which Democrat House Speaker Laurie Jinkins promised would be filed after Governor Inslee issued similar unlawful vetoes of selected sentences within the Low Carbon Fuel Standard and Cap-and-Trade bills passed last spring.  Speaker Jinkins stated in May that the governor’s veto “reaches beyond his constitutional powers and we will ask the Washington courts to again rule on the balance of legislative and executive branch powers.” Yet, in the subsequent 6 months, no lawsuit has been filed.  (Washington Policy Center, The Lens, and House Democrat Caucus media release)

Governor Inslee has removed one of the few State Senate Democrats who does not march lockstep in supporting his extreme and ineffective environmental agenda by appointing Senator Steve Hobbs (Lake Stevens) to become the next Secretary of State.  Senator Hobbs, as Chairman of the Senate’s Transportation Committee, has long been a thorn in Inslee’s side by stalling passage of the expensive and ineffective Low Carbon Fuel Standard (LCFS) sought by ultra-liberal environmental groups. This year, as part of a transportation “grand bargain,” Inslee’s LCFS legislation (HB 1091) was not referred to Senator Hobbs’ committee, and instead was sent to the more friendly Senate Energy, Environment, and Technology Committee, where it was favorably passed to the full senate.

As Shift exclusively reported yesterday, Senator Hobbs was part of a very unusual action by Governor Inslee’s office last Friday.  He was one of four Democrat senators (along with Senators Reuven Carlyle, Mark Mullet, and Kevin Van De Wege) and two Democrat staff members against whom the governors’ office filed public records requests seeking internal communications on the LCFS and Cap-and-Trade legislation and the governor’s subsequent unlawful partial veto.

The Secretary of State position opened when current Republican Secretary Kim Wyman announced she had accepted a position with the Biden Administration to oversee federal election security efforts.  Democrat Precinct Committee Officers in the 44th Legislative District will now forward three nominees to the Snohomish County Council to select a replacement for Hobbs’ senate seat. (Our guess is that Inslee’s political operatives have already made sure the appointed senator will be more supportive of the governor’s expensive agenda.)  The appointed senator will then face election next November if they wish to stay in the office.  (Governor Inslee media release, Washington Legislature Bill Summary, Shift, Governor Inslee’s Office’s Public Record Request, and The Olympian)

A class-action lawsuit against the Democrats’ poorly developed Long-Term Care payroll tax has been filed in federal court.  The suit was filed on behalf of three Washington State businesses and six individuals who work in the state.  Among the many arguments featured in the suit against the new tax is that it violates the Equal Protection and the Privileges and Immunities clauses of the U.S. Constitution, because it requires people who are ineligible for the program’s benefits to pay the tax (i.e. Oregon residents who work in Washington). The case also asserts that the tax violates the federal Older Workers Benefit Protection Act, since workers who are within 10 years of retirement must pay the tax yet cannot receive the $36,500 in so-called benefits.

We should remind readers that, along with this new lawsuit, there is a citizen’s initiative to repeal this very badly planned tax (which was primarily developed by Democrat lawmakers to increase the size and cost of the state government for the benefit of their major campaign contributors in the SEIU).  I-1436 is an initiative to the legislature which would allow people to opt-out of the tax at any time, allowing workers, not state government, to decide which long-term care insurance approach is best for them. The campaign is currently looking for volunteers to collect signatures. (Associated Press and I-1436 campaign)

For those interested in learning how many of the failures of our public education system can be reversed, the Washington Policy Center is hosting a free online event tonight with the Founder of Black Minds Matter, Denise Merriweather. The one-hour event, which will include audience questions, begins at 7:00 PM.  Click on the link for more information and to register. (Washington Policy Center)

Brandi Kruse’s first [un]Divided podcast examined why the Washington State Democrat Party strongly supported the candidacy of the radical Nicole Thomas Kennedy to become city’s top elected public safety official, despite her extreme hatred for law enforcement and her pro-criminal beliefs.  Kruse stated, “Rather than risk losing an election to a Republican (Ann Davison), the (Democrat) Party decided to defend the indefensible” by supporting a pro-criminal extreme activist even while crime rates are skyrocketing.  Kruse argued this was an irresponsible action by Washington State Democrat Party Chair Tina Podlodowski. “The party showed that it is literally willing to put people’s lives on the line if it meant keeping Republicans out of office.”  We hope other reporters will follow Kruse’s lead, and exhibit some journalistic professionalism by asking Democrat politicians if they condemn the reckless actions of their party and if they will refuse any of financial or grassroots assistance such an extreme party might offer their campaigns. ([un]Divided podcast/YouTube and Tina Podlodowski Twitter)

A man who stole a bus and intentionally crashed into vehicles at high speed has yet to be charged and is currently out of custody, due the Seattle Police Department not having enough officers to file the necessary paperwork.  A man stole an unoccupied bus and rammed into many cars in the SoDo and Dearborn neighborhoods before crashing into a playground on October 26th.  Yet because 300 officers have left the police force due to lack of support from liberal elected officials, and nearly 100 more officers have been “separated” from their jobs due to lame-duck Seattle Mayor Jenny Durkan’s vaccine mandate, there have not been enough officers to file the required paperwork to keep the man in custody.  Thus actions from liberal politicians are directly responsible for allowing a criminal, who a judge determined was a danger to the community, to remain free to commit more crimes against innocent citizens. (Seattle Times)

The Tacoma School District asked parents if it should have students replace snow days with distance learning instead of making up the lost time by adding days to the school year in June.  Results from the poll have yet to be released to the public, but it is easy to imagine that the 4,000 people who responded were not favorable to this particular alternative, after experiencing the diminished quality of education distance learning provided during COVID restrictions.  (News Tribune)

Lincoln County Sheriff Wade Magers said his department has had great success hiring former Puget Sound area officers who want to get away from the toxic law enforcement environment that is the norm in Western Washington.  Sheriff Magers said that previously he could not compete with the money being offered by departments on the West side of the state. But things have changed in the past year, as the Sheriff’s office has recently hired four officers who used to work on this side of the Cascades for the Washington State Patrol, King County, Pierce County, and the City of Seattle. (iFIBER One)

In a Shift exclusive, we report on the very bizarre act of Governor Jay Inslee’s office making public records requests for internal communications among four Democrat state senators and two Democrat legislative staffers regarding the 2021 session’s “grand bargain” on transportation and whether the governor had the constitutional authority to veto sections of the extreme Low Carbon Fuel Standard (LCFS) and the Cap-and-Trade bills. The surprising intra-party records request was made of Democrat State Senators Reuven Carlyle (Seattle), Steve Hobbs (Lake Stevens), Mark Mullet (Issaquah), and Kevin Van De Wege (Sequim) and staffers on the Senate’s Transportation Committee and Environment, Energy, and Technology Committee.

Earlier this year, the governor upset legislators who were involved in the “grand bargain” (which tied the implementation of Inslee’s two expensive and ineffective “climate” bills to the future passage of a transportation package which must include at least a 5-cents a gallon gas tax) when he unconstitutionally vetoed sections of the legislation which delayed the implementation of the climate bills until after the gas tax was passed (which is scheduled to take place during the 2022 legislative session).  Democrat legislators immediately threatened to file a lawsuit against the governor for overstepping his veto authority.  Yet, in the six months since the veto, no actual lawsuit has been filed. (Click to read full Shift article) 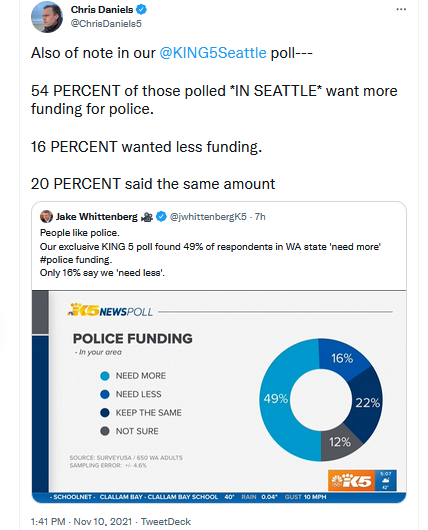 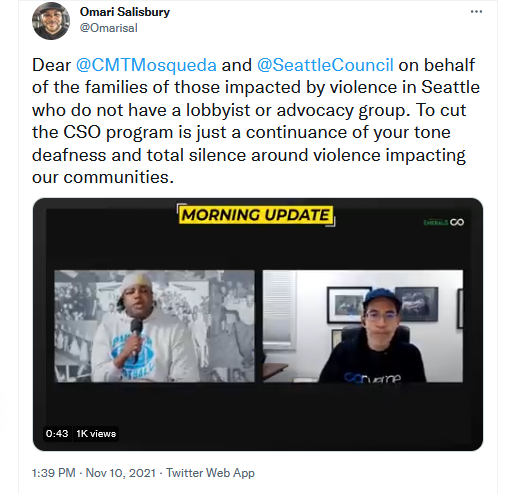 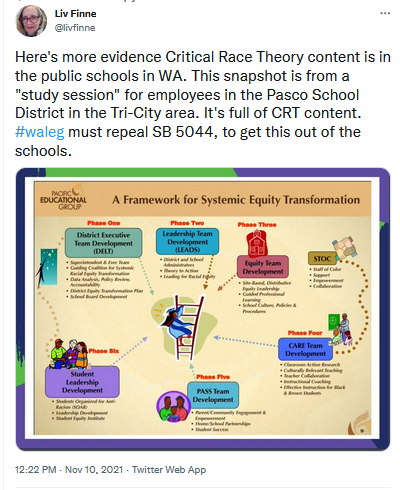