In an incredibly bizarre and unprecedented action, Governor Jay Inslee’s office made a public records request of four Democrat senators and two Democrat committee staff members over emails and other internal materials related to their work on transportation-related “grand bargain” legislation and whether the governor had the authority to veto sections of his extreme Low Carbon Fuel Standard (LCFS) and Cap-and Trade bills.

A quick history review, all the way back to this year’s fenced-in session. Governor Inslee, in order to twist the arms of the votes needed to pass his expensive and inefficient “climate bills” during the 2021 legislative session, struck a deal 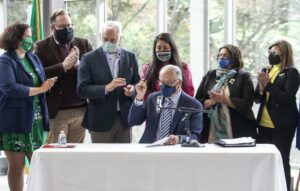 with legislators to insert a section into the legislation which linked the actual implementation of the two bills to the passage of a 5-cent per gallon tax on gas to fund a transportation package (which is scheduled to be debated during the upcoming legislative session).  Yet when the bill arrived on Governor Inslee’s desk, he broke his end of the “bargain”, and vetoed the section which linked the bills to the gas tax.

The governor’s unconstitutional “section veto” pleased wealthy environmental donors and groups which will financially benefit from the immediate implementation of his extreme bills.  Yet Governor Inslee’s vetoes obviously upset many Democrat legislators who negotiated the “grand bargain.”

Remember that Democrat House Speaker Laurie Jinkins immediately stated that legislators were going to sue the governor for overstepping his veto authority.  Not surprisingly, in the six months since the governor vetoed the legislation, the meek-and-mild legislative Democrats have yet to follow through on their pretend threat and actually file the promised lawsuit. (Just like when Pierce County Democrats publicly threatened to amend the governor’s emergency authority after he unfairly imposed COVID-related restrictions on their constituents. After telling voters they were going to challenge the governor, the Pierce County Democrats quietly did nothing and have allowed the governor to continue his one-man rule of the state for nearly 620 days.)

It is not known why the governor’s office filed the public record requests for materials related to the “grand bargain” and the governor’s unconstitutional veto, only that the targets of Inslee’s intimidation are Democrat Senators Steve Hobbs (Lake Stevens), Mark Mullet (Issaquah), Reuven Carlyle (Seattle), and Kevin Van De Wege (Sequim), and from Democrat staff members of the Senate Transportation Committee and the Senate Environment, Energy, and Technology Committee. The request was made by Thomas “Tip” Wonoff, the governor’s Deputy General Legal Counsel.

Adding another level of intrigue to the governor’s strange intrusion into the legislative branch is that there appears to be some connection with Inslee’s public records request and one made earlier by the Senior Attorney (Jan Hasselman) of the wealthy extreme environmental special interest group Earthjustice.

We should note that while the governor’s office was asking to snoop around in the internal communications of the four Democrat senators, one of the subjects of his intimidation, Senator Reuven Carlyle, was actually with the 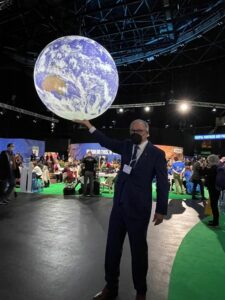 governor mingling with wealthy environmentalist at the much-hyped (and eventually meaningless) global COP26 conference in Scotland.  Perhaps someone could file a records request to determine if Governor Inslee showed enough respect t the Chair of the Senate’s Environment, Energy, and Technology Committee to actually inform him the Senator of his attack as they were sipping fine wine and munching expensive cheese during one of the conference’s exclusive events.

It is interesting that the executive’s request involved three Democrat Senators that Governor Inslee and his well-financed allies have targeted to be “primaried” by even more extreme candidates. The goal of course is more reliable liberals, who would always support the government employee unions’ desire to greatly increase the size and cost of government (and the taxes to pay for it).  Senator Mullet was the target of a multi-million-dollar government employee union-financed challenge during the 2020 election.  Leaked documents at the time showed that Governor Inslee’s rich allies were planning to finance radical candidates against Senator Hobbs and Senator Carlyle during the 2022 elections.

It is also curious that Senator Hobbs is included in this document request, since many observers have tabbed him as the favorite to be appointed by the governor as the new Secretary of State (after the departure of Kim Wyman). By placing Senator Hobbs in the Secretary of State’s office, Inslee will replace his transportation-focused voting record with a more liberal individual who is willing to take orders from party bosses.

This internal Democrat conflict should only become more interesting in future days and weeks.  Shift seems to currently be the only media outlet reporting on this story, and we promise to keep you informed as it further develops.