Speculation is that Governor Inslee is waiting for Biden’s staff to call him and drafting up excuses as to why he is breaking yet another promise to Washington State voters.

Shift’s sources reveal that Governor Jay Inslee’s outgoing chief of staff David Postman has been offered a position with President-elect Joe Biden’s transition team.   It was announced last week that Postman would be leaving the post he has survived in since December 2015, and was expected to stay on the state payroll for a few more months wrapping up unnamed projects.  This move has increased the discussion on whether one of those projects is securing Inslee a glidepath into the Biden Administration, despite the governor’s repeated pledge to remain in Olympia. After all, this is the same man who said (with a straight face) he would oppose tax increases, to get the votes he needed for his current job. Some believe that Postman’s rumored posting could provide Inslee the inside track to a position, while others contend Biden bringing Postman on his team diminishes Inslee’s chances since it could mean Postman is the only talent around Inslee (including Inslee) worth promoting. (US News & World Report)

The Washington Policy Center will be hosting a free virtual showing of the excellent documentary The Pursuit this Thursday evening.  The film is about former president of the American Enterprise Institute (and Seattle native) Arthur Brooks, as he explores ways to lift individuals out of poverty.  Brooks reveals how free market capitalism has solved economic hardship for billions and remains the best cure for those stuck in poverty.  You can learn more and register for the event, which will include the film’s director John Papola, by clicking on the link. (Washington Policy Center)

We found a recent statement by the Washington State Employment Security Department (ESD) to be rather curious, though, of course, many things at ESD are curious.  The ESD posted on its website, “The governor, with support from the Legislature, has announced that job search requirements will remain suspended through Dec. 7”, for those applying for/obtaining unemployment benefits.  The statement did not provide information as to how the legislature provided this support, since the legislature has not been in session since March.  The statement also raises the question as to why Governor Inslee’s ESD finds it suddenly necessary for the legislature to provide support on the governor’s emergency orders, after spending the past seven months ignoring Republican legislators letters and calls from numerous newspapers to bring the legislature back into special session. (Employment Security Department’s website and Shift)

The King County Elections Department’s Monday afternoon count provided no new votes in the only really close legislative race left, the State Senate race in East King County’s 5th Legislative District.  Incumbent Senator Mark Mullet continues to hold an 88-vote lead over challenger, and fellow Democrat, Ingrid Anderson in a race that continues to divide the Democrat Party.  Anderson “earned” the endorsement of Gov. Inslee and millions in financial support from state employee unions and other deep-pocketed special interests, allowing the extreme Left-wing of the party to promote their greedy bigger-government policies by removing the fiscally moderate Mullet (who as a business owner understands the negative impact of taxes on job creation). The race will almost certainly go to an automatic recount.  The question that many people have is whether this failure will slow down planned efforts by the government employee unions to target more Democrat Senators in 2022, by financing challengers who will blindly support their radical tax and spending plans. Last month it was leaked that there were plans among political operatives who represent public unions to go after Senators Reuven Carlyle (D-Seattle), Steve Hobbs (D-Lake Stevens), and Jamie Pederson (D-Seattle) in two years. Their collective sin – not being liberal enough to support all the selfish tax increases (income tax, energy taxes, car tabs, etc.) the government unions are demanding. (Secretary of State Vote Totals and Seattle Times).

The City of Seattle’s liberal homeless, drug, and crime policies have ruined many of the city’s 500 parks, and have made them unusable for most of Seattle’s residents.  From neighborhoods to downtown, Seattle’s playgrounds and parks have been overtaken by homelessness, drug usage, and criminal behavior. They are no longer safe places for children to play, take dogs for a walk, or a quiet place to enjoy nature.  911 calls continue to escalate as neighbors report criminal behavior and dangerous conditions in, and around, parks.  After the radical Seattle City Council defunded the navigation teams which helped people relocate when homeless camps were deemed a danger, none of the council members has provided any plans to alleviate the problem.  As one parks advocate stated, “This has got to be on the council. I think the council has allowed this to happen.”  Despite the city continuing to raise taxes and spending literally billions of dollars in the past decade to alleviate the homeless, drug, and crime problems, the situation continues to get worse and thousands live in the cruel reality which liberal policies have created and enabled. (KOMO News)

Clallam County is the only county in the country which has voted for the winner of every presidential contest since 1980.  Going into the 2020 election, the north Olympic Peninsula county was one of only 19 counties to have sided with the presidential victor in the previous 10 elections.  In last week’s elections, the other 18 counties voted for President Trump, while Clallam was the only Washington county which changed its allegiance from 2016, and voted for former Vice President Biden. (KING5 News)

Republican Greg Gilday continues to expand his lead over Democrat Angie Homola in their 10th District House of Representatives contest.  Gilday expanded his lead to 528 votes yesterday, after coming from behind over the weekend, and is just beyond the 0.5% range which requires an automatic recount.  Both Island and Snohomish counties are reporting that they have counted nearly all their votes, and Skagit County (where Homola has a slight edge) will be counting most of its remaining votes this evening.  Also in the 10th Legislative District, Republican Senator Ron Muzzall has opened a 1,500-vote lead over his Democrat challenger, to allow the appointed incumbent to keep that seat in GOP hands for another four years. (Everett Herald and Secretary of State voter turnout report)

LaDon Lindy has been appointed by the remaining two Yakima County Commissioners to fill the seat vacated by the death of Norm Childress.  Lindy, a former dairy farmer and current a health care administrator, was the top selection of the three nominees forwarded by the Yakima County Republican Party. (Yakima Herald)

Environmental groups are refusing to accept that the recovery plan for gray wolves has been successful, and are (of course) planning to sue the federal government over its recent decision to remove the wolf from federal protection under the Endangered Species Act.  This was expected from the environmental groups, since they are financially dependent on exacerbating environmental problems to obtain donations from wealthy contributors.  In Washington State, the gray wolf population has grown from less than five to nearly 150, and the Colville Indian Tribe has also delisted the species, and it allows the wolves to be hunted by tribal members. (Pacific Northwest AG Network and the Washington Policy Center)

The Washington State Democrat Party is pushing the myth that Washington voters gave Governor Inslee a “mandate” to raise our taxes and increase the size and power of government for another failed climate change policy.  Since the only two things the governor “campaigned on” were for people to wear masks and not vote for Donald Trump, it is an incredible stretch to say the citizens of Washington gave Inslee a “mandate” to pay off the government employee unions with another expensive energy policy doomed to failure and which will do little to help the environment. (Washington State Democrat Party fundraising email) 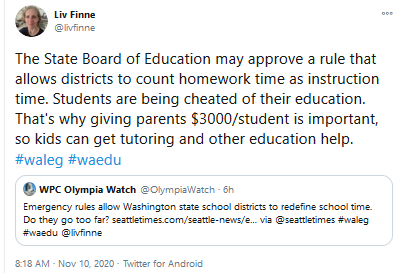 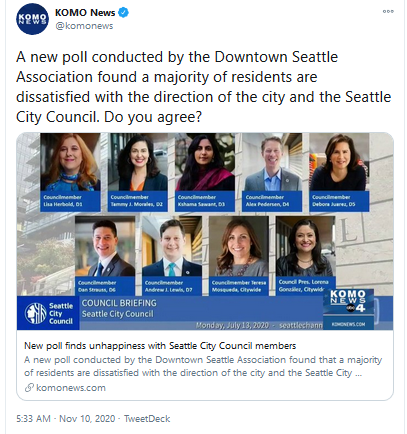