The Seattle Times states that “Someone messed up big time, or someone is lying” in regards to the missing texts from several Seattle officials during the riots by liberal activists last summer.

Republican Senate Leader John Braun joined his House counterpart Representative JT Wilcox in condemning Governor Jay Inslee’s recent proclamation which requires employers to become the “vaccination police” by forcing them to maintain records on workers’ vaccination status.  Senator Braun criticized the governor’s justification for the orders by asserting Inslee, “has consistently shown a lack of faith in the people’s ability to take precautions against COVID-19. Those handing down the ‘guidance’ don’t seem to recognize employers have nothing to gain by having either their customers or workers become ill.”  Senator Braun also questioned Democrat lawmakers’ commitment behind their public comments they are against vaccine passports, arguing that “trying to require a workplace passport by proxy is just as much of a mistake. I support vaccinations and encourage people to consider vaccinations for themselves and their families. I also believe it is a personal choice that should be respected.” (Senate Republican Caucus media release)

While Democrat legislative leaders continue to condemn Governor Inslee’s unconstitutional veto of the language in his expensive climate bills (Low Carbon Fuel Standard and Cap-and-Trade) linking them to the passage of a future transportation funding package, Republicans point out that the governor’s misguided belief that he could veto subsections in these bills’ is due to the Democrat legislators being unwilling to challenge his prolonged use of emergency orders.  While stating that legislators are currently working on filing a lawsuit against the governor for his “inappropriate and illegal” veto, Senate Democrat Leader Andy Billig claimed that Governor Inslee has damaged the legislative process. “It will be more difficult to find that middle ground in order to pass bills knowing that there might be this kind of executive actions afterwards.”

Meanwhile, House Republican Leader JT Wilcox argued that Democrat lawmakers ought to realize that their lack of action to reform the governor’s emergency orders had set the stage for Inslee’s unlawful veto of subsections in legislation.  Wilcox stated, “I have to question in my mind (whether) the fact that the two Democrat caucuses have failed to even discuss in public any reform to the executive emergency powers has led the governor to believe that there is no check on him. Democrats have let him do this for almost 500 days, which means that his experience is there is not a check to the executive.  I think absolutely that overreach without effective legislative pushback just leads to more overreach.” (TVW’s “The Impact”)

The Seattle Times blasted Seattle Mayor Jenny Durkan and other city officials for their costly failure to keep texts they were sending around the time of the greatest political violence in Seattle last summer. While the Mayor Durkan insists it was not her fault that the texts were deleted, city technicians stated the phones were properly set up to maintain the texts when they were delivered to the mayor. The Times concludes, “Someone messed up big time, or someone is lying. Certainly someone tried to cover it up.” Because texts were deleted, this will certainly hurt the city in its defense against the numerous lawsuits which have been filed against the city by the families of those who were killed at the CHAZ/CHOP, and by Capitol Hill residents and businesses which were impacted by the city’s decision to vacate the police department’s East Precinct and allow six city blocks to be taken over by the rioters.  It is worth noting that, while lame duck Mayor Durkan will soon be departing her office and collecting several different taxpayer-funded retirement checks, the taxpayers will likely be forced to pay for her mistakes through expensive court judgements against the city. (Seattle Times)

A Renton police officer was cleared of any wrongdoing as an investigation found that a biased Seattle Times story failed to accurately portray the officer’s relationship with an individual arrested for participating in the January 6th riot at the nation’s capital.  A Renton Police Department investigation found that a Seattle Times reporter, seeking to show ties between police officers and Right-wing organizations, exaggerated the relationship between the police officer and Ethan Nordean. He is a member of the Proud Boys extremist group and has been arrested for his role in the takeover of the Capitol building in Washington, D.C.  The two had a severed business relationship and they had not spoken in over a year, and the police officer was not knowledgeable about the Proud Boys’ activities.  It is interesting that the Seattle Times appears to be working really hard to find connections between the Proud Boys and police officers, yet we do not recall any investigations by the media into the connections between the liberal activists who attempted mass murder of police officers and illegally took over six blocks of Capitol Hill and the region’s liberal establishment, which recklessly caved into the rioters’ demands and have refused to condemn their violent behavior. (MyNorthwest and Seattle Times)

Three Tacoma officers have been criminally charged in the death of Manuel Ellis, following an investigation by the Washington State Attorney General’s office.  Ellis died of oxygen deprivation while he was restrained by police on March 3, 2020.  Two of the officers will be charged with second-degree murder and first-degree manslaughter, while the third officer will be only be charged with first-degree manslaughter.  The Tacoma police union immediately issued a statement calling the charges “a political witch hunt” and said they believe a jury will find that the three officers “acted in accordance with the law, their training, and Tacoma Police Department policies.” (News Tribune)

A former Lewis County sheriff believes that if law enforcement officers are held personally liable for the split-second decisions that they are required to make, then elected officials and bureaucrats should also be held personally liable for the decisions they take months to make.  In a Centralia Chronicle op-ed, John McCroskey wrote that the idea that officers should be liable for their on-the-job decisions “looks like it will get some traction.”  McCroskey contends the idea is being pushed by those “making political points at the expense of law enforcement officers.”  (Centralia Chronicle)

The Washington State Farm Bureau has taken a leading role in the lawsuit challenging the constitutionality of the Democrats’ state income tax on capital gains bill which was recently signed by Governor Inslee. The agricultural trade association enlisted former Washington State Attorney General Rob McKenna to lead the legal effort and has supplied many farmers to serve as plaintiffs in the case.  The Farm Bureau’s CEO John Stuhlmiller claimed the bill (SB 5096) was unconstitutional for many reasons and that their objective is to strike down the entire bill.  Stuhlmiller said, “We’re going for the whole thing. It’s a bad policy.” (Capitol Press, Shift’s Newsmaker Interview, and Washington Legislature Bill Summary)

Environmental groups are seeking to return federal protections for wolves that were lifted 10 years ago by the Obama Administration, despite the species’ current population numbers.  In 2011, the federal government lifted its protection on wolves in Montana, Idaho, and the far Eastern portion of Washington State (the Trump Administration completely lifted federal protection for all regions, including Central Washington, in 2020). Environmentalist organization have asked the Biden Administration to bring back all federal restrictions due to recent actions by Idaho and Montana state lawmakers which allows for more hunting of the wolves. (Northwest Public Broadcasting)

Overheard On The Internets 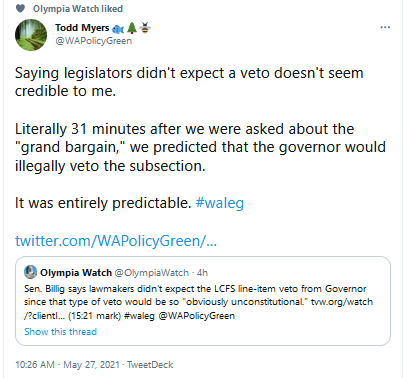 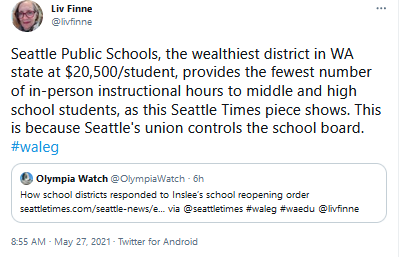