While liberals continue to selfishly push for bigger government to solve every problem, elected officials never take responsibility when the inevitable difficulties occur.

House Republican Leader JT Wilcox takes apart Governor Jay Inslee’s latest unrealistic COVID-related regulations which he has imposed on state employers.  Responding to the governor’s latest dictatorial order which require employers to obtain private health information to verify workers’ immunization status and keep daily logs of the status of each worker, Representative Wilcox called on Governor Inslee to rescind the order. “Our state should not require employers to ask their employees if they are fully vaccinated for any reason. Forcing employers to ask and record this personal medical decision violates employee privacy and is fundamentally wrong. People never envisioned having to do this and the question is, what’s next?”  Wilcox then went on to be critical of Democrat legislators who have chosen to allow Governor Inslee’s never-ending one-man rule of Washington State to continue, asserting, “The inaction of legislative Democrats means that the governor has seen no check to his authority, and this has naturally led to overreach.”  (House Republican Caucus media release)

A state lawyer from Washington Attorney General Bob Ferguson’s office made an argument in a case defending a tax imposed on out-of-state banks which could impact future legal actions against the recently passed state income tax on capital gains.  A state attorney argued before the Washington State Supreme Court that the banks have yet to pay the tax (scheduled to be first collected in 2023) and that a tax cannot be legally challenged until a tax has been paid.  If the court agrees with this argument, it could delay further proceedings for two years on the bank tax, as well as delay any consideration of the state income tax on capital gains. There are currently two lawsuits filed seeking to throw out the recently passed capital gains tax, which if allowed to be implemented, will first be collected in the Spring of 2023 (based on 2022 income). (Lens and Shift Newsmaker Interview with Rob McKenna)

Seattle Times columnist Danny Westneat writes about one of the major faults of bigger government – no one takes responsibility.  Westneat details the litany of failures which no one at Seattle City Hall has taken responsibility – abandoning the East Precinct during last summer’s riots by liberal activist,  using  tear gas against the rioters, the mass exodus of police officers, the homeless encampments next to schools, and the city’s homeless crisis which now impacts every single Seattle neighborhood – and yet the same failure in accountability can be said about nearly all large government entities.  For example, at the state level, not one person has taken responsibility for the momentous loss of $1.1 billion at Jay Inslee’s Employment Security Department (ESD).  Whenever details of the historic failure are being revealed or discussed, the governor suddenly goes into hiding.  Suzi LeVine, the person Governor Inslee picked to lead the ESD and who was in charge when decisions were made to ease security protocols, first attempted to downplay the massive loss of taxpayer funds by saying it happened in other states, and later was admonished by the Washington State Auditor for hampering her office’s investigation of the crime.  Despite her many failures, LeVine was not only never punished for her multiple failures, but rather she was rewarded by big government with a new job in the Biden Administration, without ever being held accountable for her costly decisions at ESD.  (Seattle Times)

Teachers at Broadview-Thompson K-8 school have sent a letter to both city and school district officials stating that they and their students feel unsafe due to the homeless encampment that continues to grow on their school property.  When asked to comment on the situation, government officials from both the city and school district, denied it was their responsibility to provide a safe environment for children to learn and instead blamed the other for the problem.  Meanwhile, school personnel have installed plastic tarps along the playground fencing to keep most of the encampment out of view. (KIRO News)

Seattle City Councilmember Kshama Sawant continues to be dependent on out of city and out of state financial contributors to keep her position on the city council.  Sawant’s campaign has raised $531,000 through a national network of Socialist contributors eager to defend her against the recall effort.  Only a quarter of her support comes from within her primarily Capitol Hill district.  Meanwhile the Recall Sawant campaign has raised $480,000 with more than 80% coming from Seattle residents.  The recall campaign is in the midst of an effort to collect 10,739 signatures to place the recall measure on the ballot. (MyNorthwest, Seattle’s City Council District 3 map, and Recall Sawant)

As the City of Seattle continues to cut police resources, random acts of violence continue to increase in the city.  The latest dangerous trend has been people throwing objects from I-5 overpasses onto fast-moving vehicles traveling on the freeway below.  This included a five-foot-long piece of rebar that was thrown from the 12th Avenue overpass and became lodged in a car’s dashboard.  Earlier this week, someone threw a 20-pound Lime scooter from the Freeway Park overpass onto I-5, which narrow missed numerous cars but did cause $15,000 damage to one vehicle as the driver crashed while avoiding the object. The person responsible for the hazardous action was quickly apprehended by police but was soon released due to the city’s lenient policies toward criminal activity. (KIRO News)

In the Democrat’s latest insult to the state’s agricultural community, the Inslee administration still requires fully vaccinated farmworkers to wear masks and continues to force many other unnecessary COVID-related regulations onto farm operators.  The leaders of the Washington Farm Bureau and the Washington Farm Labor Association issued a joint statement critical of the double standard Governor Inslee placed on state farmers.  Last week when the governor announced that fully vaccinated people do not need to wear masks at work, he failed to include farmworkers who reside in temporary housing.  The statement asserted, “As the 2021 harvest season launches, this double standard for the agricultural community is not based on current science, is creating widespread confusion and is financially catastrophic.”

This is the latest slight by state Democrats against Washington’s agricultural community. During the 2021 legislative session, Seattle liberals highjacked a bill (SB 5172) which protected farm owners (who followed the current wage laws) from retroactive lawsuits from those seeking overtime backpay and turned it into a union driven wage law which will cost both farm operators and farm workers money.  During the Senate debate on the Democrats’ state income tax on capital gains (SB 5096), a Democrat caucus document included the ignorant insult that farm owners become wealthy “while working less than half time.” (YakTriNews, Washington Legislature Bill Summary, Shift Newsmaker Interview,  Democrat Senate Caucus taking points memo for SB 5096) 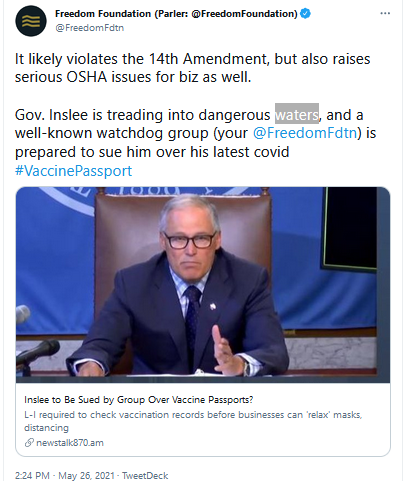 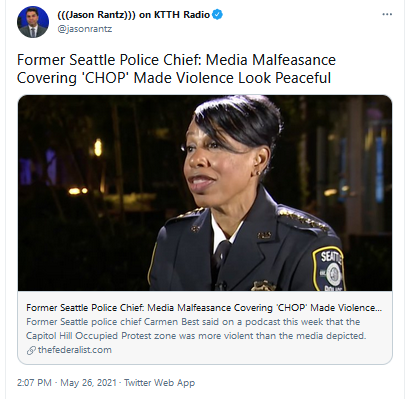 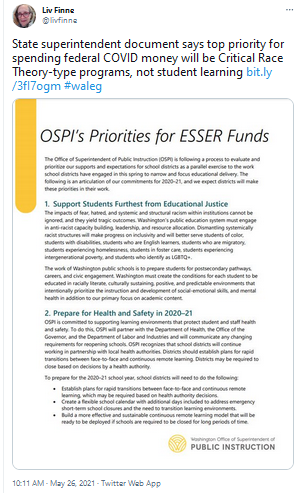