After embarrassingly admitting he was unaware of the major national news story happening in his state, Governor Inslee tries to demonstrate he is now aware of the incident by engaging in an unproductive Twitter battle and raising money for his campaign. 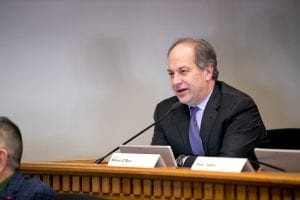 This week’s Newsmaker Interview is with Senator Steven O’Ban (R – Pierce County), one of the most effective members of the Washington State legislature.  A state senator since 2013, O’Ban was quickly recognized as a knowledgeable source on a wide array of subjects and a valuable advocate on mental health issues.  In his interview with Shift, Senator O’Ban grades Governor Jay Inslee’s actions during the coronavirus crisis, calls for ESD Commissioner Suzi LeVine to resign, provides his thoughts on a legislative special session and the pending 3% pay raise for state employees, and describes why it is “absolutely necessary” for there to be an independent review into the death of Manuel Ellis.  (Shift)

After Governor Inslee’s shocking and embarrassing admission that “It is news to me” that the City of Seattle had abandoned a police precinct and that protestors had taken over control of a 6-block area in Seattle, the governor tweeted yesterday an acknowledgement he was finally aware of the situation that has been a top national news story for three days.  In his tweet, the governor provided no assurances or awareness of the concerns many citizens have over the violent nature of the protests, and provided no leadership in attempting to resolve the issue. This continues to raise concerns about Governor Inslee’s seemingly limited sources of of information and views.  He has disbanded bi-partisan legislative work groups in favor of partisan advisory committees made up of liberal special interest groups and campaign supporters, he ignores letters from lawmakers, and does not return phone calls from mayors trying to help their communities.  Now we find out he was completely unaware of a national news story that was happening in his own state.  This is the Peter principle in action.  (Inslee Twitter, Rebecca Perry Twitter, Shift, News Tribune, and Wikipedia)

While Governor Inslee continues to be irresponsible with state funds, liberal legislators are calling for proposals to tax Washington residents and businesses even more – despite the fact many are struggling to pay their bills. While Governor Inslee’s administration has cost taxpayers “hundreds of millions of dollars” due to mismanagement at the Employment Security Department, and he is desperately avoiding having to stop a second 3% pay raise going to state employees to placate his major contributors in the government employee unions, the state is going further and further into debt.  To pay for the debt they have created by massive overspending when times were good, Democrat lawmakers like Rep. Frank Chopp (remember him?) are calling for $2 billion in additional taxes from a (likely unconstitutional) capital gains income tax and a (job-killing) employee head tax.  Remember, Governor Inslee and the Democrat legislature have increased the state budget an historic 20% during the past two years and they now want you to pay for their greed and poor management. (Frank Chopp Campaign website)

Employment data is often incomplete and precise details about the job market often take months to be made available.  Normally this delay is not a problem, but with the sudden wage loss of hundreds of thousands of Washington residents, and the slow re-opening of the economy, it will be difficult for lawmakers to obtain accurate and current employment data as to how different job sectors are performing.  This has been made more difficult due to the near collapse of the application process for unemployment claims by the Washington State Employment Security Department. This failure, and the over-abundance of fraudulent claims processed, is significantly impacting the data used to determine employment rates. (Puget Sound Indexer)

In a Wall Street Journal column, KVI talk show host John Carlson states how Seattle city leaders are repeating some of the same mistakes they made 21 years ago during the WTO protests, ones which cost the police chief his job and helped cause the mayor’s re-election campaign loss.  Carlson also describes what he saw when he visited the “Capitol Hill Autonomous Zone” earlier this week. (Wall Street Journal)

In the latest example of knee-jerk reactions replacing thoughtful and deliberative policy making, King County Metro will no longer provide out-of-service buses to help transport law enforcement officers to protests.  In a statement from King County Metro General Manager Rob Gannon, he says, “our conversations and reflections in recent days remind us of the role that law enforcement has played historically in our nation and continues to represent for many within the communities we are most called to serve. It is within that frame that Metro strengthens its June 3 statement by clarifying that, under no circumstances including through the County’s Emergency Operations Center, will we provide buses to law enforcement traveling to demonstrations or protests.” (King County Metro blog)

Tacoma Police Chief Don Ramsdell stated his support of an independent state review into the death of Manuel Ellis, who died while in custody of Tacoma police officers.  The chief said, “I think it’s the right thing to do based on the circumstances. The facts will remain the facts and I support any investigation that is going to be independent and transparent.” (News Tribune)

In promoting innovation to solve local concerns (innovation is usually better than bigger government to solve many problems), Amazon is running contests in eight North Puget Sound cities to encourage new ideas.  Through the Amazon Catalyst Competition, the company will hand out $10,000 in each of the eight communities (Arlington, Bellingham, Bothell, Edmonds, Everett, Lynnwood, Marysville, and Mount Vernon), for the three best ideas to tackle a specific problem. The contest is being run by the Northwest Innovation Resource Center. (Everett Herald)

In an apology that was posted in a front-page ad in the Spokesman-Review, hundreds of Clallam County residents apologized for the actions of a few of their fellow residents toward a multi-racial Spokane family who had visited the Olympic Peninsula county in early June.  The family was followed, threatened, and detained by locals who said they thought the family members were Antifa protestors coming to create problems in their community.  One of the organizers of the apology ad said he was shocked when he heard about the incident. Sequim resident Ankur Shah said, “I was absolutely horrified, and completely surprised. I’m a person of color myself, and I have never in my life heard of something like this happening here.” (Spokesman-Review)

Former Washington State Senator Joyce Mulliken is calling for a change to the federal Patient’s Bill of Rights Act to allow family members to stay with loved ones while they are facing medical emergencies.  During the COVID-19 outbreak, many hospitals have denied this occurrence either due to state/local regulations or hospital policies.  Mulliken believes federal policy should be changed to allow a family member to stay with the patient. (iFIBER One)

After finally receiving Phase II health guidelines from the state in May, the Wine Institute has been working with state wineries to safely re-open their businesses to both workers and customers.  Winery tastings and tours are a major source of tourism dollars in Southeastern Washington. (Washington AG Network)

In another attempt to show he is finally aware of the siege that has taken place on Seattle’s Capitol Hill, Governor Inslee did what he has often done before – he engaged in an unproductive and divisive Twitter battle with President Donald Trump and then sought campaign contributions for his actions.  Just hours after admitting he knew absolutely nothing about the abandonment of the East Precinct in Seattle, and subsequent takeover of six blocks by the protestors, Inslee’s campaign staff decided to raise money off his ignorance of the crisis.  Yet, among the things the fundraising email failed to tell us – why was President Trump aware of the story happening in Washington’s largest city, yet Governor Inslee admitted he knew absolutely nothing about the incident? (Inslee Campaign fundraising email) 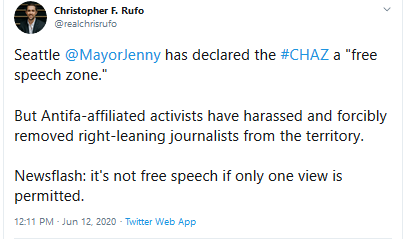 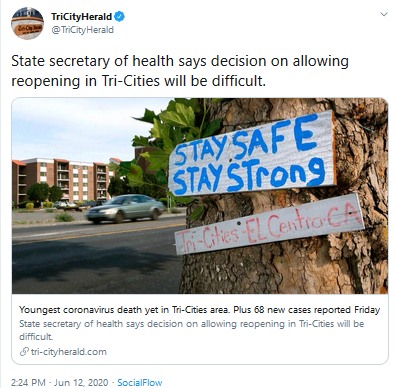