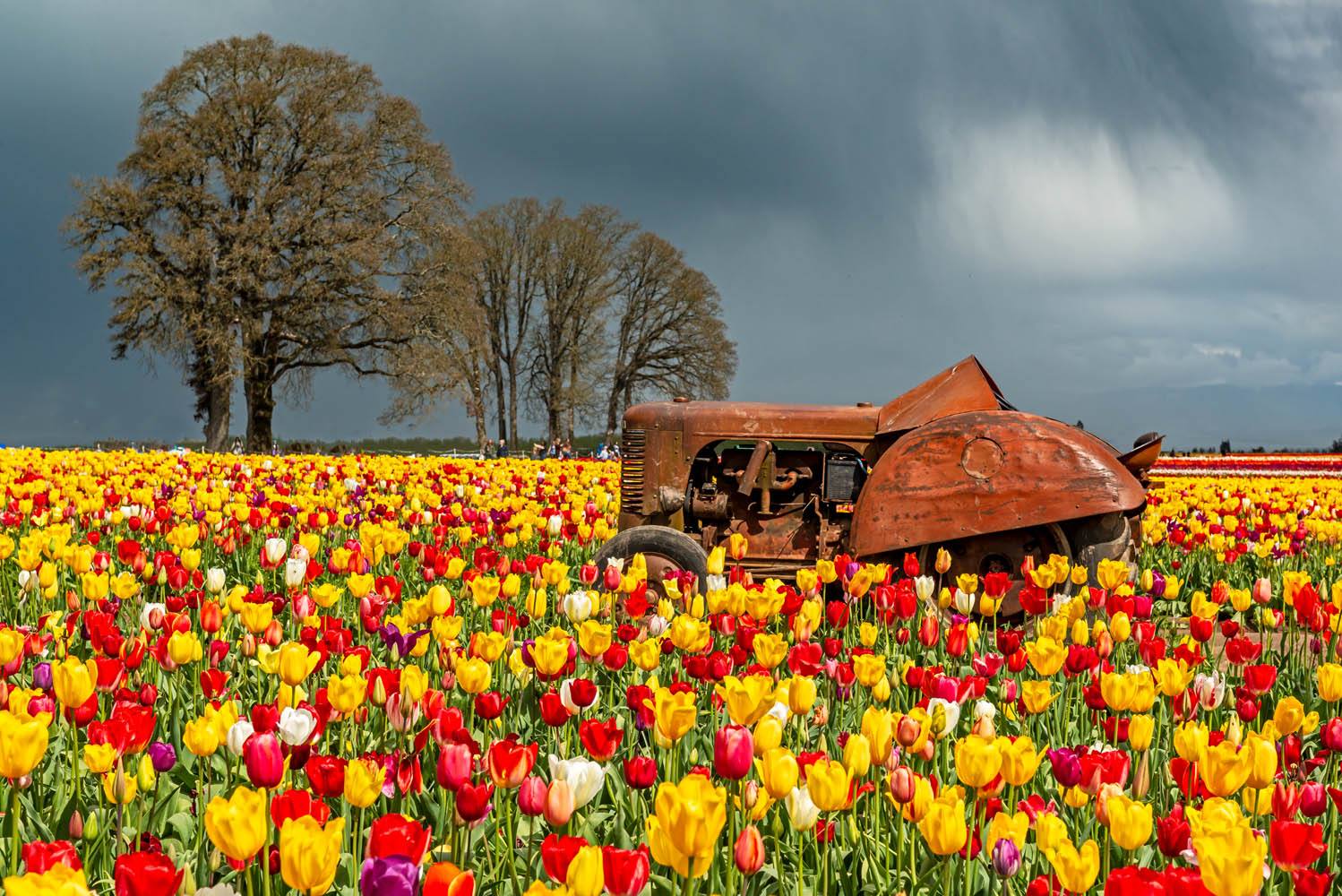 Governor Jay Inslee’s poll numbers continue to plummet as he fails to provide inclusive leadership in battling the coronavirus outbreak, and as his fellow Democrats fracture over police funding and the ongoing Seattle riots.  In a recent Crosscut/Elway Poll (which is often weighted toward liberal voters), we see the governor’s approval rating drop from 75% down to 49% in just over two months. While Governor Inslee has failed to take a public position on defunding the police (the governor instead spends his time seeking TV cameras to try out for a cabinet position in a possible Biden Administration), Washington residents overwhelmingly oppose (73% against) the actions of Seattle’s Democrat lawmakers to defund the police.  (Shift and Crosscut/Elway Poll)

Emails reveal that Governor Inslee and his staff have not been honest with Washington State residents on whether there has been serious consideration of rolling back car tab fees, as was approved by Washington voters in 2019.  Last November, 53% of Washington voters supported I-976,  to reduce car tab fees to $30.  Big government, higher-tax politicians continue to challenge the voters’ wishes in court.  When Governor Inslee was asked in April if he would roll back car tab fees to provide financial relief to Washington residents, the governor said he would give the idea some thought.  Yet subsequent emails from the governor’s team has demonstrated there has been no exploration of this idea, which could save Washington residents hundreds of dollars.  One of the strangest defenses for keeping the high car tab fees comes from someone within Inslee’s Department of Licensing, who writes that residents should continue to pay the higher fees since, “With the Stay at Home order, persons who are driving are generally those working at essential jobs.” Thus, it is the state’s belief that those who have lost their jobs have no reason to drive their cars. (Washington Policy Center)

Q13’s Brandi Kruse takes aim at her fellow journalists and their obvious hypocrisies in their coverage of the ongoing Seattle riots and the defunding police issue.  We encourage our readers to watch the 10-minute segment from her weekly news program “The Divide” (worth watching just to see the bumbling response by Seattle City Councilmember Lisa Herbold to the riots).  Kruse begins the segment with her thoughts on the news coverage of recent events. “Not pointing out obvious moral and logical inconsistencies and shortcomings on the part of elected officials does make it seem like you have an opinion – a strong opinion. And that you are intentionally looking the other way when things just don’t make sense, because you have an agenda.” Kruse concludes her commentary by stating, “We as a press corps can do better, we have to do better.” We will tag onto Kruse’s critical comments on the local media by asking why the local media is failing to ask our state’s Democrat leaders if they support the radical defunding of the Seattle Police that is supported by their fellow Democrats on the Seattle City Council.  Does Governor Jay Inslee, Attorney General Bob Ferguson, and State Democrat Chair Tina Podlodowski stand with their fellow Democrats on the Seattle City Council, or do they stand with the 73% of Washington residents who oppose this proposal? (Q13 The Divide and Crosscut/Elway Poll)

A new report, which states that the failure of the Inslee Administration to develop an effective plan that focuses on treatment and assistance to those who are most at risk to the coronavirus, is forcing the state to continue to impose broad restrictions, which severely impacts the state’s economy and leaves many Washington residents needlessly unemployed.  Despite promising such a plan in early June, the state-run website detailing the statistics to measure the plan says this data is, “coming soon.” Thus, Governor Inslee and his team have no way to measure its efforts to reduce the spread of the coronavirus among the state’s most vulnerable residents, and it appears they have no plan to develop one. Maybe it’s lost in the email with the car tab relief plan. (Washington Policy Center and Washington State Department of Health Dashboard)

Native leaders condemn the actions of fellow liberals who use “intimidation acts” when protesting outside the home of Seattle City Councilmember Debra Juarez.  As Democrats continue to fight amongst themselves over defunding the Seattle Police Department, there have been protests outside the homes of Mayor Jenny Durkan, Councilmember Alex Pederson, and Councilmember Juarez, who all support a less radical version of law enforcement budget cuts. Juarez, who is a member of the Blackfeet Nation, received public support from many tribal leaders, who criticized fellow liberals for the “violence” in their protest actions. (Seattle Times)

The News Tribune labeled the liberals’ new method of infringing on public officials’ safety and property rights by protesting at their homes as a “gangster tactic.”  The editorial says that the strategy first bloomed in California, but has now been used against liberal politicians in Seattle, Olympia, and Gig Harbor. The column states there is an “uneasy feeling somebody’s going to get hurt before all this ends. Whenever people’s children, families and homes are involved, things can spiral out of control.”  (News Tribune)

Among the many lawsuits against the City of Seattle for abandoning six blocks on Capitol Hill to rioters, is one from the mother of a CHAZ shooting victim.  The lawsuit claims the city was irresponsible to abandon the East Precinct and a portion of the city, and then failed to have a plan to provide essential services to the area. (MyNorthwest)

The King County Council has purposely made it nearly impossible to developed new oil and gas pipelines in the county.  Despite the federal government being in charge of regulating pipelines, the council approved a series of requirements (like how the pipeline would impact “equality”) and restrictions (can’t be built near a school, hospital, gathering spot, or designated wetlands) which nearly eliminates any future new construction.  As Councilmember Dave Upthegrove stated, “We’re setting as high a bar as we legally can.” (Seattle Times)

Expensive lawsuits continue to pile up against the City of Mill Creek, as it attempts to mitigate the loss of tax revenue by laying off employees.  Mill Creek’s city manager is drawing criticism for laying off six longtime employees yet retaining two out-of-state employees who are friends of his from previous jobs. The city had budgeted to spend just over a million dollars on legal fees in 2020, yet they are currently on track to spend over $2 million. (Everett Herald)

Proponents continue to push to waste massive amounts of taxpayer dollars for an expensive passenger rail service to connect Spokane, Tri-Cities, and Yakima to Seattle.  A recent state-ordered study determined that it would cost nearly $400 million in construction and new equipment to begin a passenger service over Stampede Pass.  It is estimated that only 200,000 passengers would annually use the service which would take 8.5 hours to travel between Seattle and Spokane. The annual operating budget would be $30 million (approximately $150 per passenger). The primary reason given by a rail advocate for developing the twice daily service is that occasionally the highway passes are closed due to weather conditions in the Winter. (Spokesman Review)

A King County Superior Court judge sided with the Washington Department of Fish and Wildlife’s (WDFW) decision to eliminate the “Old Profanity Territory” wolf pack.  Last August, the WDFW determined that it would lethally remove the four remaining members of the wolfpack, which has been responsible for at least 29 attacks on livestock in Ferry County. Environmental groups had filed the lawsuit against the WDFW’s ruling, because they don’t care about farmers or whether their livestock is being attacked. (Washington AG Network)

10th Congressional District candidate Marilyn Strickland blasted out a fundraising email titled, “following up about how you can stop the coded attacks.”  While providing her ethnic background in her email, Strickland failed to be specific about who her campaign was claiming was attacking her by using racially coded language.  Since Strickland is in a heated primary battle, could these racially insensitive comments be coming from one of her fellow Democrats?  Was Strickland’s campaign pointing out yet another example of racist behavior from those involved in Washington State Democrat politics?  And why does the Strickland campaign fail to be specific about who is using “dirty campaigning” to attack her? (Strickland Campaign email and Crosscut) 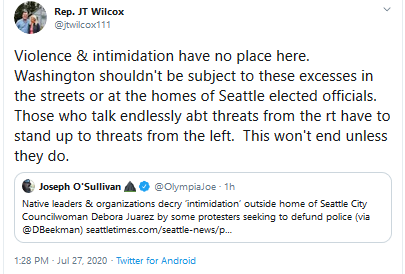 If you feel we missed something that should be covered, email us at info[email protected]