Governor Jay Inslee continues to promote the very bad idea of forcing everyone to vote by mail.

Governor Jay Inslee recently sent out a campaign email stating, “I’m confident that there is zero reason not to have a mail-in ballot under any condition.”  It is the latest example of how the governor’s reliance on a ridiculously small group of partisan advisors and campaign contributors nearly always leads to bad policy decisions. If the governor had spoken with anyone outside his small bubble, he would learn there are many very legitimate apprehensions about this very expensive ($500,000,000 was the figure floated by national Democrats) and reckless partisan idea, and why it should not be implemented nationwide.

As Shift wrote back in April, there are at least a dozen major concerns with this Democrat proposal.  The federal government does not run elections, they are run by over 3,000 county offices across the country.  In order for Governor Inslee’s foolish suggestion to become a reality, 3,000 counties would need to change their election laws and alter their budgets, buy and repeatedly test new equipment (nearly all would still need to be manufactured), hire and train new staff, train volunteers, go through a government process of selecting mail vendors, verify and update signatures of voters on file, rent new office space to process the ballots (which needs to be large enough for social distancing), update mailing addresses of all voters, and build and distribute secure ballot drop boxes.  All this needs to be accomplished in just over three months while many election workers have yet to return to their offices.  It would be absolute mayhem across the country if we were to follow Inslee’s partisan demand, and the results would be heavily tainted due to the unavoidable errors committed by thousands of election workers doing something for the first time with very little proper training and no experience.

And let us not forget the incident this weekend in Whatcom County, when a postal carrier committed the partisan (and likely illegal) act of wrapping a mailed ballot with the campaign material of a Democrat legislative candidate.  Obviously, this is not a concern for the divisive and partisan Governor Inslee, since the possible illegal act benefited a Democrat.  (Inslee campaign email, Shift, and Facebook)

Typical of many Democrats who get caught doing or saying something foolish, 42nd Legislative District candidate Alicia Rule attempted to blame her opponent as she “walks back” her previous comments that a postal worker had wrapped Ms. Rule’s ballot with her own campaign material.  In a Facebook post over the weekend, Ms. Rule showed a picture of her campaign material wrapped perfectly around her ballot with a text that said, “Ballots arrived today! Mine was carefully tucked together with a flyer by our neighborhood postal worker. I am reminded of just how much support we have because even that postal worker’s (sic) union has endorsed our campaign. We are in this together for all of us.”  Since it is illegal for postal workers to display political favoritism to a candidate, Ms. Rule’s statement obviously caused an uproar.  Obviously, Ms. Rule’s handlers, party bosses, and postal workers’ union lawyers quickly got together to squelch the damage created by Ms. Rule’s comments by writing a statement that was released late Monday.  Instead of standing up and admitting she had posted a poorly worded Facebook statement, Rule chose to blame her opponent. For Ms. Rule, at best this episode shows she lacks the ability to effectively communicate and that she fails to take responsibility for her actions, and at worst it shows illegal activity supporting her campaign. (July 18 Rule Facebook post and July 20th Rule Facebook post)

Jason Mercier of the Washington Policy Center points out that Governor Inslee could be breaking state law if he does not call for a special legislative session or immediately implement across-the-board cuts in the state’s general fund.  According to Washington state law (RCW 43.88.110(7)), if the governor projects a deficit in any state fund then he “shall make across-the-board reductions in allotments for that particular fund or account so as to prevent a cash deficit.”  Since the Washington State Economic and Revenue Forecast Council projects a $4.5 billion revenue shortfall for the current budget, there is certainly evidence the state is projecting a budget deficit.  Inslee has said he could borrow from other accounts, including from emergency reserves. Yet, also according to state law, the governor cannot do this without legislative authority. (Washington Policy Center, KING5 News, and Revised Code of Washington)

Today’s Seattle Times headlines include a “homicide on Aurora Avenue North,” and “One killed in shooting in Seattle’s Central District.”  Even as violence continues to grow in Seattle, statewide Democrats are unwilling to take a stand on their fellow Democrats on the Seattle City Council’s proposal to slash the police budget by 50%.  Governor Jay Inslee, Attorney General Bob Ferguson, Senator Patty Murray, Senator Maria Cantwell, and State Democrat Party Chair Tina Podlodowski have all used their Twitter accounts in the past weeks to talk about many issues, but they refuse to take a stand on an issue that has dominated state (and national) headlines and impacts the safety and welfare of hundreds of thousands of Washington residents. The silence brings to mind the question of why aren’t the members of the state’s media doing their job and pushing for answers from our state’s political leaders? (Seattle Times)

An anonymous letter from a Seattle police officer says that he has been broken by the lack of support from city officials.   The letter describes “the mission” he and other officers have taken to protect the citizens of Seattle.  The officer then states the city now doesn’t “deserve me.” He continued, “The anarchists and Jacobin Marxists currently controlling our city’s future have created an environment that will not allow public order and safety to be maintained. And that puts your freedom in peril.” Meanwhile, (as we mentioned in the above item) state Democrat elected officials (Inslee, Ferguson, Murray, and Cantwell) and State Democrat Party Officials (Podlodowski) remain silent over the desire of their fellow Democrats on the Seattle City Council to defund the police that are endangering the lives of hundreds of thousands of Washington residents. (MyNorthwest)

Tacoma Police Chief Don Ramsdell announced that he will be retiring in January 2021. The 35-year member of the Tacoma Police Department has been chief since 2003.  A nationwide search will now be conducted for a new leader for the department that has been under scrutiny since Manuel Ellis died while in police custody in March. (News Tribune)

It appears the Federal Aviation Administration is moving towards approving Boeing’s 737 MAX to return to service, but it likely will not occur until October.  Federal government officials will soon provide a 45-day public comment period on allowing the troubled aircraft to carry passengers again. Previously, Boeing officials were hoping for clearance by September, but once again the very public approval process has been delayed. (Seattle Times)

The Hanford nuclear reservation’s computer system was one of the targets of a successful hacking effort by individuals supported by the Chinese government. The hacking was widespread among both private and government systems, but was first discovered at the Department of Energy’s system at Hanford.  Earlier in July, a Spokane grand jury brought forth an indictment against two Chinese nationals who will likely never set foot in the United States. (Tri-City Herald/News Tribune)

The leading campaign opponent of Representative Cathy McMorris Rodgers has dropped out of the race, citing mental issues and the revelation of possible misconduct in a previous romantic relationship.  Chris Armitage withdrew from the race right after ballots were mailed for the upcoming August 4th primary. Armitage was the leading Democrat candidate after raising $150,000 for the race (mostly from out-of-state contributors through ActBlue). (KREM2 and Federal Election Commission)

The rise in COVID-19 infections could force Chelan-Douglas schools to remain closed at the beginning of the school year – in less than six weeks.  The increase of coronavirus cases among younger residents has forced many local health officials across Washington to reconsider opening schools in the next few weeks. In the Wenatchee area, the infection rate has ballooned up to 423 per 100,000 residents.  Local health officials are hoping the increased usage of masks will reduce the number of cases. (Wenatchee World) 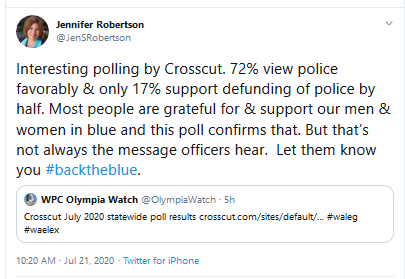 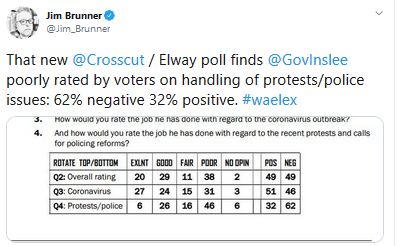