Governor Inslee finally signs relief measures for those impacted by his orders – something he could have done months ago if he had called a special legislative session.

It’s about time! Governor Jay Inslee could have delivered emergency relief to Washington State residents far sooner than yesterday, when he finally signed legislation that provides mostly federal dollars to many residents who have been negatively impacted by Inslee’s own actions.  Instead of waiting 10 months to assist those in professions that were severely restricted by the governor’s “emergency orders,” Governor Inslee could have called a special session of the legislature last year, and enacted financial measures which could have prevented thousands of small businesses from permanently closing and assisted tens of thousands who lost their wages.  Governor Inslee’s statement yesterday, that he was “happy we’ve done this early in the session, because this really, certainly is needed,” is very hypocritical, as this could have been accomplished much sooner, and the financial anxiety experienced by Washington residents could have been reduced, but instead the governor and his ego selfishly refused to call the legislature into a special session. Just like when Governor Inslee forced Washington taxpayers to pay for the extra cost of state-provided security during his failed presidential campaign, the governor puts his political ego far ahead of the needs of Washington State residents. (Seattle Times)

The Washington State House Finance Committee will be holding a public hearing this Thursday, at 8:00 AM, on the Democrat’s latest bill to impose a state income tax on capital gains.  The controversial and unconstitutional measure (HB 1496) is the latest attempt by Washington Democrats to get around the state constitutional ban on an income tax.  The problem for the Democrats is that the IRS and all 49 other states categorize a tax on capital gains as a tax on income, and thus it is unconstitutional in Washington.  Democrat lawmakers are hoping that if the bill is passed, a liberal Washington State Supreme Court will ignore the overwhelming evidence that the measure is unconstitutional and allow it to become law.  In doing so, it will allow the Democrats the opportunity to open up a new lucrative revenue stream to pay for their dreams of an ever-larger and more powerful state government.  If you would like to register to provide verbal testimony on the bill, or if you would like to provide written testimony, you can do so by clicking this link. It is interesting to note that Socialist City Councilmember Kshama Sawant was one of the very first people to register to provide testimony in favor of the bill. (House Finance Committee testimony registration, Washington Legislature Bill Summary, and Washington Policy Center)

An interesting item that the media seems to be ignoring this session has been the Democrats’ reaction to 9th Order motions in the Washington State Senate.  The 9th Order is a  procedure allows a members to bring to the full chamber a bill that is stuck in committee.  A majority of Senators voting is needed for this to happen, which is one reason why the majority party does not like such tactics. The Republican Senators have twice attempted the 9th Order with SB 5114, a bill that would move all of Washington State to Phase 2 under the governor’s poorly named (and even more poorly designed) “Roadmap to Recovery” plan.  This vote proved embarrassing for Democrat Senator Kevin Van De Wege (Port Angeles), who stated his public disapproval of the governor keeping much of his Olympic Peninsula district in Phase 1, as he chose to vote with his Democrat colleagues to prevent SB 5114 from voted on. Thus, when given the opportunity to decide between the economic recovery of his district versus sticking with his Democrat colleagues, Senator Van De Wege chose party loyalty.  (Washington Legislature Bill Summary and Senate Democrat Caucus Media Release)

A majority of those who registered to testify on a bill to reform a governor’s emergency powers support limiting the power of the governor during an emergency.  Driven by Governor Inslee’s endless one-man rule, filled with orders that are not supported by scientific evidence – but are supported by his special interest buddies – Washington State residents strongly support fixing the law that provides the governor with emergency powers.  The bill (HB 1029), written by Representative Jim Walsh (R – Aberdeen), would require the governor to obtain legislative support within 14 days of issuing an emergency order.  Even though the bill is supported by community leaders across the state (who have been ignored by the governor and his administration during the past year), there is little chance the bill will be voted on by the Democrat-controlled committee.  (News Tribune and Washington Legislature Bill Summary)

Something appears suspicious in the sudden “retirement” of Bothell City Manager Jennifer Phillips.  The quickly arranged exit was announced by Phillips in an email to several other city administrators, and then was confirmed in a media release from the city.  The city council will be voting this evening on a very lucrative ($130,000+) severance package Phillips has negotiated for herself despite being on the job for only four years.  Although both Phillips and city councilmembers have made positive public comments about the unexpected departure, it has been admitted that some councilmembers have been unhappy with recent decisions.  Also, Phillips abruptly hung up the phone when a media member contacted her seeking comments. Perhaps if the council members were spending their own money, they would not be so inclined to approve this apparent hush money payment. (Everett Herald)

Brandi Kruse gave Seattle city councilmembers a week to respond to insinuations from other city officials that they do not care about the increase in homicides and shootings – and evidently none of them are bothered by the accusation they do not care. Previously, Kruse had Seattle Interim Police Chief Adrian Diaz and Mayor Jenny Durkan on her program “The Divide” to discuss the increase in violent crime in Seattle.  When asked if he believed city councilmembers were concerned about this spike, Diaz gave a political response by saying “I hope so.” Mayor Durkan was more forthcoming when she responded by saying, “I haven’t had a single member of the council ask me about it.”  Kruse reached out to councilmembers Tammy Morales (who represents South Seattle), Andrew Lewis (who represents Downtown Seattle), and Lisa Herbold (who chairs the council’s Public Safety Committee), to ask each of them to respond to the accusation that they do not care about the increase in violence.  Kruse reported that not one of them accepted the opportunity to respond. (Q13’s “The Divide” on Facebook)

A Seattle Times reporter is caught using misleading data in order to promote her liberal environmental perspective on the Snake River dams.  Linda Mapes wrote a long opinion piece  over the weekend regarding Congressman Mike Simpson’s (R – Idaho) proposal for the federal government to spend $35 billion to remove four Lower Snake River dams and provide financial support to the communities that are impacted by the silliness of removing the dams.  In her opinion piece, Mapes uses incomplete data provided by her environmental activist friends which conveniently supports her views that the dams are the cause for the decline of both Chinook and Steelhead salmon.  Yet, a response from the Washington Policy Center points out that the selective use of data is not only politically misleading, but “is counterproductive to efforts to focus salmon-recovery resources where they are needed most.”  Even though data for 2020 exists, Mapes chose not to include this data, because it shows an increase in the number of salmon returning, and may indicate we are likely at the end of a low point in an historic cycle.  Also, by only showing data for the Snake River, instead of for the entire Columbia River Basin, Mapes attempted to pinpoint the blame for the decline of returning salmon solely on the Snake River dams.  The historic chart of returning salmon at the Lower Bonneville Dam, the first one fish meet when returning from the Pacific in the Columbia), mirrors the historic graph of the Snake River.  This shows that the fluctuation in the number of salmon is regionwide and not just because of the Snake River dams.  But that data didn’t fit with the story that Mapes wanted to write, so she left it out. (Washington Policy Center and Seattle Times)

Apparently qualified job-seekers are needed in Spokane, as its former City Council President, and failed mayoral aspirant, Ben Stuckart was selected as chair of Spokane’s Continuum of Care Board, a group overseeing the region’s homelessness response.  This move led to plenty of head scratching, because, Stuckart was the prime mover behind placing the controversial Jewels’ Helping Hands group in charge of a $740,000 contract to run a city operated “warming center” in Spokane, back before he left office in 2019.  After Stuckart rushed this contract through the city council, it was found that one of Jewels’ officers had recently been convicted for embezzling and had served time for the offense.  Jewels was later relieved of the contract by the City of Spokane, and authorities are investigating many allegations against the organization.  Jewels’ founder has since filed a lawsuit against the city, saying the investigation is hurting the group’s ability to land new contracts. But it isn’t hurting Stuckart from landing a new gig. (Spokesman Review and Shift) 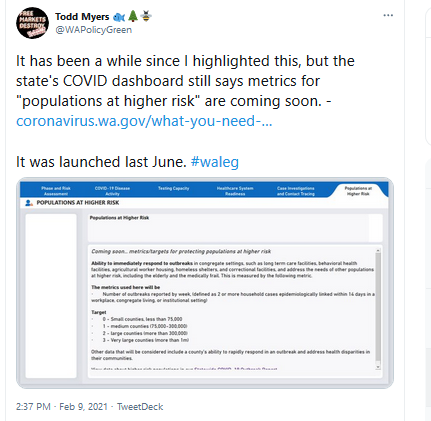