Hypocrites supporting Jay Inslee’s Low Carbon Fuel Standard claim such a policy in Washington won’t increase energy prices, yet in California they profit from an LCFS that keeps prices rising.

A new report from the Washington Policy Center exposes a significant contradiction from a major promotor (and likely benefactor) of the Democrats’ Low Carbon Fuel Standard (LCFS) proposal.  Tim Zenk, a high-priced Washington State lobbyist for the Norwegian company Naste (which will financially benefit from the higher energy costs Jay Inslee wants to impose on Washington residents) testified at a state House hearing that California has lower gas prices now than when it passed its LCFS in 2011 (the truth is prices are higher).  Despite facts not being on Zenk’s side in WA, it also appears clear that his employer knows the truth about a cost-raising LCFS. After all, Naste representatives told California regulators not to impose a cap on how high an LCFS could increase fuel costs, and allow gas prices to continue to climb (and make it profitable for them to develop more expensive energy sources). Thus, while talking to Washington State lawmakers, Naste’s representatives claim an LCFS will not increase energy costs, yet in California, they do not want to stop prices from escalating. Hypocrisy much? (Washington Policy Center)

As Democrat legislators continue to use the failed policies of the City of Seattle as their roadmap to impose more government control and higher taxes on Washington State residents, one of their silly copycat (and highly regressive) ideas is a tax on “sugary drinks,” similar to the one Seattle implemented in 2017.  The legislation (SB 5371) would tax sweetened beverages 1.75 cents per ounce, thus increasing the cost of a 12-ounce can by 21 cents.  Numerous studies have found that low-income families usually end up paying the most when similar taxes have been imposed elsewhere.  In 2018, after the City of Seattle imposed its “soda tax,” Washington state voters overwhelmingly supported I-1634, which banned other local governments from imposing a similar tax.  Once again, Democrats are ignoring the concerns of Washington voters as they continue to increase the cost of living in Washington State, so liberal lawmakers can keep expanding the size of government.  (KING5 News, Washington Legislature Bill Summary, Tax Foundation, and Secretary of State 2018 Vote Totals)

Matt McIlwain penned an effective op-ed in the Seattle Times which refutes many of the “myths” the Democrats are arguing as they push to implement an unconstitutional state income tax on capital gains.  McIlwain relied on facts the Democrats choose to ignore, to destroy their position.  The Democrats’ argument that the state needs the money is refuted easily by the fact that tax revenues have increased over the last budget, and are projected to increase during the next one. The fact that the IRS and all 49 other states consider a capital gains tax as a tax on income is a strong argument against the Democrats claim that their proposal is an excise tax, not an income tax. And since Washington voters have rejected other income tax proposals the last 10 times in a row the question has been put to them, it’s pretty clear that the state’s citizens do not support the Democrats’ bonehead proposal.  McIlwain also points out that while this proposal currently targets the wealthy, he predicts that Democrats will soon follow their own history and find reasons to expand the tax to middle income families. (Seattle Times)

The Seattle Times joins the long list of Washington State newspapers in opposing the Democrats’ greedy proposal to pass an unconstitutional income tax on capital gains.  The state’s largest paper argues that, “Senate Bill 5096 amounts to taxation for taxation’s sake.”  The editorial goes on to explain the bill’s “numerous” deficiencies, before taking special aim at the bill’s “misapplication” of the emergency clause, which “precludes the right of voters to challenge the tax by referendum,” and the paper believes is a “flat-out abuse of authority.” No wonder, with press coverage like that from their friends, that Democrats don’t like to admit in public that they are trying to create a state income tax. (Seattle Times and Washington Legislature Bill Summary)

The grandson of the only City of Seattle mayor to become Washington State governor is seriously considering a run to replace the retiring Mayor Jenny Durkan.  North Seattle resident Arthur K. Langlie let the Puget Sound Business Journal know that he is developing plans to run for the position which his grandfather, Arthur B. Langlie, held from 1938 – 1941 (before becoming a three-term Governor of Washington State).  Langlie is currently a business executive with a major electrical contracting company and a longtime board member of the Salvation Army.  Langlie said he has been talking with others as he develops his plan to reduce the city’s increasing homeless problem, clean up the city, ensure racial equity, maintain public safety, and assist neighborhood and downtown businesses that have suffered during the pandemic and liberal activists riots. (Puget Sound Business Journal and Wikipedia)

Apparently backlash from Seattle residents and employers has helped to stall Seattle Councilmember Lisa Herbold’s radical plan to “excuse and dismiss almost all misdemeanor crimes committed in Seattle by persons with symptoms of addiction or mental disorder.” Herbold had hoped to sneak her bad idea past the public, but after her plan to pass the legislation (without a public hearing) through the city’s budget process was first revealed in Shift and other media outlet last October, the councilmember was forced to withdraw her controversial proposal.  Demonstrating that her liberal ideology is unbowed by public opposition, Herbold did say that she planned to reintroduce the plan later.  Yet Crosscut reveals that radical councilmember has not reintroduced her controversial proposal, and has provided no timeline for when it might be re-introduced.   (Crosscut and Shift)

The Seattle Education Association continues to delay in-person instruction for Seattle schoolchildren, because they can. School administrators informed the public that the previously scheduled March 1st return was being delayed at least another week. This is due to ongoing negotiations with the powerful teachers’ union, which is enjoying the opportunity to flex its political muscle, while students’ education suffers.  The union’s commitment to ensuring that school leaders prioritize their own desires over the needs of children has kept the district’s 50,000 students stuck in its disastrous and unequitable distance-learning program, while pushing their false claim that it is not safe to return to the classroom.  Parents are frustrated as school district throughout the country have proven that in-person instruction can safely take place, but evidently Seattle can’t learn to do the same. (KOMO News)

Residents of the Garland District in North Spokane are complaining about the increasing amount of drug paraphernalia that is ending up on their property.  One resident, who lives near a “warming center” for those who are homeless, said she has found piles of syringes on her property and that there has been a recent increase in criminal activity.  Authorities have informed her that she is responsible for cleaning up the dirty needles on her property. “I shouldn’t have to live like this,” the longtime resident proclaimed. “I shouldn’t have to worry about needles in my driveway.  If my kids want to have friends over, I shouldn’t have to worry about them being poked.” (KHQ – TV)

The Washington Department of Fish and Wildlife continues to seek the best methods to increase the population of the Columbia Basin pygmy rabbit, which was listed as endangered in 2001.  A WDFW biologist stated, “They’re very much like salmon. Some years you just have huge booms and we have more than we can believe, and a couple years later, they crash, and they just disappear.”  Wildfires made more damaging by the state’s poor management of forest lands are a major culprit in the recent decline in the species’ population. (Columbia Basin Herald)

Nearly 80% of Spokane voters supported a 2019 ballot measure to open negotiations of labor contracts between city officials and public union representatives, but union bosses don’t care.  The unions have continued to stall on following the law and have even threatened that a “bar room brawl just may break out in the streets.” In an op-ed, the Washington Policy Center is encouraging city officials to follow the law, even if labor representatives do not.  They suggest that the city publicly reveal its contract offer and wait for the unions to respond in a legal manner. (Spokesman-Review)

It is well known that there is a fundraising ban for all state officials during a legislative session.  The reason for this is to prevent the appearance of lawmakers doing favors in return for a large contribution to their favorite cause (generally themselves). Yet Governor Jay Inslee appears to be skirting this law by asking people to donate to “The All In Washington Vaccine Equity Initiative.”  Inslee’s campaign sent out a fundraising email on behalf of this $30 million “public and private investment.”  This leads to two questions: if this equity was so important, why didn’t Inslee invest the necessary money from the federal funds the state received, which he has had sole authority over spending since last summer?  Also, the governor has more than $850,000 sitting in his campaign bank account.  Has he put his money where his mouth is by donating to the effort? (Inslee Campaign email and Public Disclosure Commission) 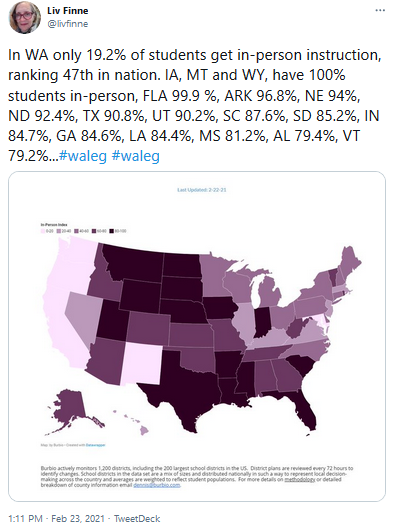 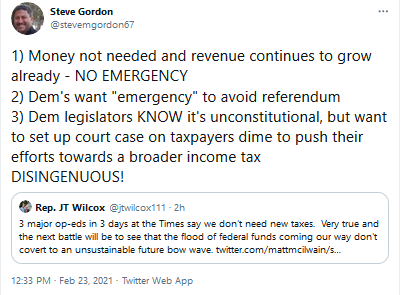