Democrats continue to ignore the fact that their “capital gains” tax proposal is an income tax and thus is unconstitutional in Washington State.

Proposed House Republican budget helps the families the Democrats have forgotten.  Democrats patted themselves on the back in 2007 for creating the Working Families Tax Credit.  Problem is, they never funded the program (because it does not achieve the primary liberal goals of expanding the number of government employees or rewarding another special interest group).  Republicans have proposed a budget that funds the long-forgotten program, helps working families (including childcare options and assisting with distance-learning expenses), and does not increase taxes. (Click to read full Shift Article)

Democrat legislators continue to ignore the fact that their “capital gains” tax is actually an unconstitutional state income tax, even after they slightly altered Governor Jay Inslee’s proposal (reducing the tax rate from 9% to 7%) before voting it out of the Senate Ways and Means Committee.  As Jason Mercier of the Washington Policy Center has researched and Shift has repeatedly reported on, the IRS and the 49 other states all consider a capital gains tax as a tax on income, which is unconstitutional in Washington State.   SB 5096 sponsor, Senator June Robinson (D – Everett) pushed a false class warfare argument when she stated, “It’s a reasonable way of asking those wealthy few to join the rest of us in building a stronger, healthier state for all Washingtonians — a state in which they have thrived.” Robinson ignores the fact that the top 10% of wage earners already pay 69% of the federal income tax, and they also likely pay property taxes, business taxes, estate taxes, sales taxes, and many other taxes, fees, and tolls.  Most are job creators whose employees also pay all of these taxes. The wealthy are also the largest financial supporters of hospitals, schools, the arts, medical research, and thousands of charities which are also “building a stronger, healthier state” (and doing so far more efficiently and successfully than government).  This makes us wonder, would Senator Robinson and all the Democrats who are supporting this tax bill, be willing to release their tax records so everyone can see just how committed they are to “building a stronger, healthier state” through their charitable giving?  (Olympian, Washington Policy Center, Washington Legislature Bill Summary, and Fox Business/Tax Foundation)

Republican legislators have introduced legislation to reduce the tax burden on those in the hospitality industry, who have been unfairly impacted by Governor Inslee’s random and unscientific lockdown orders.  Representative Brandon Vick (R – Battle Ground) sponsored HB 1299, which would reduce the state’s B&O tax by 27%, through 2025, for restaurants, bars, hotels, theaters, and others in the hospitality industry.  At a virtual public hearing this week, many small business organizations testified in favor of the legislation, many of whom said it will take years for most of the businesses to recover from the financial losses they have experienced during the pandemic. (The Lens and Washington Legislature Bill Summary)

Despite the Inslee Administration claim that its COVID-19 vaccination plan would be “equitable” in distributing doses, KUOW reports that data shows “big disparities in vaccinations, with many communities of color getting vaccinated at disproportionately low rates.”  Much of the problem is due to the Department of Health being dependent on a confusing and inaccessible website to inform the public of vaccination options.  The website makes as much sense as some of Jay Inslee’s doodles his campaign sold as artwork. This is yet another example of the Inslee Administration’s unpreparedness to immunize Washington residents, despite knowing for nine months that a mass vaccination effort would be required to end the pandemic. (KUOW)

Representative Gina Mosbrucker (R – Goldendale) has introduced legislation to stop the dysfunctional Employment Security Department from sharing social security numbers with third parties when it is not required by federal or state law.  This bill (HB 1455) is in response to the multiple data breaches of state agencies, which have made hundreds of thousands of Washington State residents vulnerable to identity theft. (MyNorthwest and Washington Legislature Bill Summary)

King County property tax bills are being mailed out and some residents will be seeing a double-digit increase.  Even as liberals continue to expand the size and cost of ineffective and inefficient governments, they keep making it more expensive to live in King County.  While a majority of the county residents will experience a tax increase of “only” 4%, many South-end taxpayers will be notified that their property taxes have soared 11% – 18%.  This is due to increased costs from local school districts and a regional fire district. (Seattle Times)

The City of Seattle has settled a CHAZ/CHOP-related lawsuit by giving $10,000 to an individual who had possessions removed when police cleared out Cal Anderson Park (for the third time) last December.  When the City of Seattle removed the homeless encampment, which was first created as part of the CHAZ/CHOP “Summer of Love”, it cleaned up garbage and personal items left behind by the “residents.”  A lawsuit claimed it was a “warrantless seizure and destruction of personal property.”  The city decided not to fight the lawsuit and decided it was best to give the plaintiff and her attorneys a check.  We should note, the city did help the woman find shelter, and she now resides in one of the city-contracted tiny home communities. And her lawyer has a tidy stack of your tax dollars to play with due to the city’s incompetence. (Seattle Times)

The Seattle Police Guild’s Mike Nolan hosts the “Hold the Line” podcast, in which he recently interviewed Portland-based journalist Andy Ngo about Antifa, the violent group behind the destructive riots in Seattle and Portland last summer.  Ngo, who suffered serious head injuries at the hands of Antifa thugs in 2019, describes the findings contained in his best-selling new book “Unmasked.”  Ngo is one of the few journalists who has investigated Antifa, the radically liberal group which nearly all local Democrats have not yet condemned for their street violence.  Remember, during Governor Inslee’s failed presidential campaign in 2019 (after Antifa’s Portland violence made national news), he was clueless about Antifa when asked to condemn their violent actions.  The governor was again completely unaware of the group’s actions as they led the violent mob that closed a Seattle Police Department precinct and took over six blocks on Capital Hill last summer. Seems like if ignorance is indeed bliss, then Jay Inslee must be the happiest person alive. (Hold the Line podcast on YouTube, “Unmasked” on Amazon, C-Span, and Rebecca Perry Twitter)

The Walla Walla Union Bulletin criticized the Inslee Administration’s repeated failure to work with local officials as the cause for the governor mistakenly keeping the state’s South Central Region in Phase 1 last week.  Washington State Health Department officials used faulty data to keep the region behind while all the rest of the state moved forward to Phase 2.  The Union Bulletin wrote, “this blunder could have been avoided had the governor and state officials shared the data with local elected officials and health officials before making the public announcement.” If the governor had done this, it could have avoided the considerable anxiety and stress that was experienced by thousands of small business employers and workers, who faced two more weeks with their businesses closed and without wages. (Walla Walla Union Bulletin) 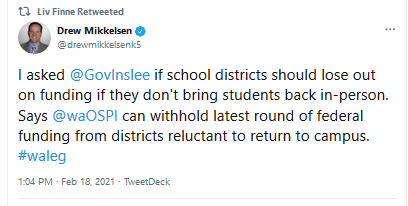 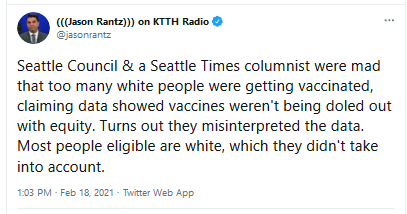