Seattle School District tell students to stop being smart because it doesn’t fit their liberal objectives.

The Washington State Senate passed a bill on Monday to ban new bottled water production.  Environmental groups pushed for passage of SB 6278 because “Washington’s waters belong to the people of Washington.”  Yet, in denying Washington residents the ability to consume local waters, we will cause environmental harm by shipping in water from other locations. (People are not going to stop consuming water.)  Urban environmentalists also make the weak claim that this bill will help our rural farmer irrigate their crops, yet no Senator representing an agriculture district bought that argument, and none supported the measure.  The bill now goes to the House for approval.  (Common Dreams and Washington Legislature Bill Summary)

Washington State House Democrats passed a bill delaying payment of “first month, last month, and cleaning deposit” for new renters.  The bill allows new tenants to spread out their payments over three months.  This additional burden on landlords is the result of decades of liberal land-use laws, regulations, and fees that have caused our current housing shortage.  Instead of increasing the number of housing units by removing burdens on apartment construction and management, liberal lawmakers are making it even less attractive to own rental properties. (News Tribune)

The State Senate unanimously passed a bill saying local police agencies cannot force officers to meet a quota for handing out traffic tickets.  The bill’s sponsor, a retired police officer and now Senator Jeff Holy (R-Cheney) said, “This really is an integrity-in-law-enforcement bill that is long overdue. Many people believe that some law enforcement agencies order officers to issue tickets, which in effect creates a ticket quota system. This is damaging to the integrity of law enforcement as a whole in Washington.” (MyNorthwest)

Under a Republican administration, Washington State received more money from the federal government than its residents paid in taxes.  In fiscal year 2018, the state received $722 million more in federal funds than it sent it to D.C. taxes.  In fiscal year 2016, state residents paid $2.96 billion more than it accepted in federal dollars.  Three reasons for the reversal are 1) More retirees receiving federal aid; 2) more spending on social services; and 3) more defense spending. (News Tribune)

The Seattle School District announced that it will no longer offer separate advanced studies classes in language arts and social studies in the district’s middle schools.  This is the latest in a string of misguided measures which sacrifices the learning opportunities of many Seattle students so the district can meet a controversial “progressive” objective. (KNKX/NPR)

The Seattle Times reported on a silly survey that found 65% of Americans could not recognize a silhouette of the Seattle skyline if the Space Needle were removed.  In fact, 53% believed it was Chicago. This makes us wonder if one was to show a street-level picture of Seattle today, with the encampments, garbage, and people living desperate lives, how many Americans would mistake it for a 1980’s picture of a developing country’s slums and not a current picture of a “progressive” American city?  (Seattle Times)

The City of Everett is planning to hire 24 more police officers before 2023.  Despite crime being down in the city, Everett’s mayor says the added personnel is necessary due to an expected population increase and because it takes longer for police to complete a call. (Everett Herald)

A small group of environmentalists is demanding that the City of Yakima do even more in the name of climate change, despite the city being very proactive in implementing climate initiatives.  Included in the activists’ list of demands is for the city to set carbon and greenhouse gas reduction goals for the future.  Even though Washington State and liberal local governments have repeatedly failed to meet similar goals, environmental groups continue to raise money for themselves by forcing governments to waste time and money setting unrealistic and costly climate targets. (Yakima Herald and Shift)

The Washington Department of Fish and Wildlife Commission is considering a ban on all hunting competitions that target “furbearing” animals.  While acknowledging there are no biological or environmental reasons for the ban, commissioners admit they are considering the ban “for social reasons.”  Coyotes are often the animal hunted in these competitions.  Last year there were two licensed competitions. The nine-person commission can impose the ban without a vote of the legislature, (Spokesman-Review) 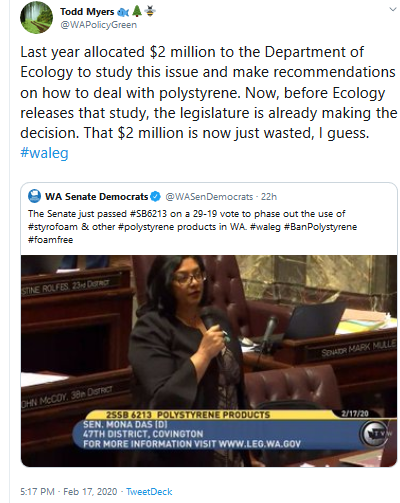 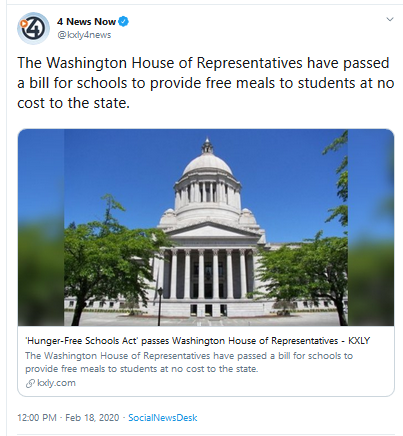