Democrats want to tax you out of your car. Once again, the centerpiece of the wealthy environmental groups’ legislative agenda is passing a Low Carbon Fuel Standard (LCFS), which government studies show could increase the price of gas by 57-cents per gallon (on top of the highest gas tax in the country). Liberals seemingly do not care that less wealthy people do not live like them in high-priced downtown Seattle condos, within walking distance of their work and shopping.  The House Transportation Committee will be holding a public hearing on the ineffective and expensive LCFS (HB 1091) on Tuesday at 1:30, and you can register your opinion on the bill by clicking here.  The highly paid environmentalist lobbyists, and their special interest buddies looking for taxpayer funding, have already signed up to testify, so the committee members needs to hear from those who will be negatively impacted by the bill, too.  You can also submit your written views on LCFS by clicking here. (Click here to read full Shift article, Washington Legislature Bill Summary, Remote Testimony Registration for HB 1091, and Comment Form for HB 1091)

The Seattle Times describes Governor Jay Inslee’s latest failure during the COVID-19 pandemic – forgetting they needed a plan to immunize millions of Washington residents once doses were delivered.  Governor Inslee, despite knowing for over nine months that a mass vaccination effort would be required for state residents to resume normal activities, was far more focused on falsely blaming the federal government for vaccination failures than in developing a strategy for the state to distribute and track the doses.  The article describes how the Inslee Administration had yet to develop a basic logistics plan or necessary tracking software by mid-December when the vaccines arrived.  As the Times article accurately describes, “Chaos ensued.”  During the initial weeks of the immunization distribution, Washington State floundered near the bottom of all states in vaccinating its residents.  As with so many of Governor Inslee’s inept COVID-19 related actions, the Times article asserts that people lost faith in the system the governor promised would lead the state through the pandemic.  Instead, this latest failure of the Inslee Administration resulted in COVID-19 infecting even more people and prolonging the unnecessary closure of small businesses and schools. But Inslee made it through his re-election campaign, so he really does not care now.  (Seattle Times)

Democrat Senator Christine Rolfes surprised everyone by announcing, on a Sunday during a three-day weekend, that her Ways and Means Committee would be going into Executive Session on Tuesday afternoon to consider the very controversial and unconstitutional state income tax (on capital gains) bill. Since the legislation (SB 5096) is not restricted by the legislature’s cutoff requirements, there is no need to rush the bill through committee.  Yet, since the bill unnecessarily raises taxes and creates a state income tax (which voters have rejected the last 10 times one has been proposed), it is very unpopular and thus it is understandable why the Democrats would want to hide their support by quickly pushing the legislation through committee immediately after a long weekend. (Senate Ways and Means Committee Agenda Update and Washington Legislature Bill Summary)

Democrat Washington State Auditor Pat McCarthy warned other state agencies on Christmas Eve that their computer system were vulnerable to cyber-attacks, and then on Christmas Day her office’s data files were hacked. The latest breach of a Democrat-managed state computer system again exposed the personal data of Washington state residents – this time 1.4 million of them -who had applied for unemployment benefits.  To compound the error, Auditor McCarthy withheld informing members of the public for three weeks that their personal information was again available to criminals.  This could be costly to the state, as lawsuits have begun to be filed by those whose personal information was left vulnerable to hackers.  It is ironic that the auditor’s office even had the personal information of the 1.4 million Washington residents in the first place That’s because it was investigating how this information was originally hacked at the Employment Security Department, after Governor Inslee’s hand-picked and pathetic management team removed security firewalls, which led to a $600 million theft of taxpayer funds. (Seattle Times)

Economist Kriss Sjoblom outlines for easy reading the many problems with the Democrats’ “Wealth Tax.” Key among the problems of the legislation (HB 1406), which seeks to tax the wealthiest state residents with more than a billion dollars in assets, is that the targeted individuals can easily claim to be a resident of another state and that the tax likely violates the state’s “uniformity” provision (meaning, all laws must be uniformly applied) in the state’s constitution.  As Sjoblom writes, “the most likely outcome would be for the Court to throw out just the $1 billion exemption, leaving in place a wealth tax for all. Uh-oh.” (Post Alley and Washington Legislature Bill Summary)

Since last August, only 84 outbreaks of COVID-19 have been associated with schools.   Data shows that 64% of these outbreaks have been confined to just two or three people. This shows that schools, especially given the age of the students, have effective protocols in place to confine COVID-19. This is the latest scientific data that contradicts the Washington Education Association’s refusal to allow students to return to in-person learning.  A senior epidemiologist for the state said, “There’s encouraging news here. We are seeing fairly low levels of COVID-19 transmission within school settings so far.” (MyNorthwest)

There are concerns that the six-month delay in the federal government providing census data to the states will cause problems with redistricting plans.  The data was to be available by the end of March, but the Census Bureau now says it will not be available until September 30th.  This could cause problems with allowing legislators – and the public – to analyze the data and the resulting boundaries before they are approved. (Northwest Public Broadcasting)

Ultra-liberal Seattle City Council President and mayoral candidate Lorena Gonzalez must be concerned about her dismal reputation among job creators as she laughably claims that “I’m very pro-small business.”  Gonzalez makes this claim while actively promoting regulations and taxes which hurt small businesses, and even failing to provide minimal support for small businesses which have been damaged by rioters over the last year.  Gonzalez even refused to sign a pledge to support small businesses when the Downtown Seattle Association (DSA) presented it to her last summer.  Gonzalez co-sponsored the very controversial (and poorly named) “JumpStart Tax”, which targets the large businesses which most small businesses depend on for customers.  Also, when liberal thugs were vandalizing small businesses on Capital Hill and Downtown, the DSA asked Gonzalez to condemn the violence, and again Gonzalez was silent. (Puget Sound Business Journal)

Jason Johnson, the former interim head of the Seattle Human Services Department, blames those who “have relationships with members of the Seattle City Council” for the lack of improvement in the number of homeless individuals, despite the large amount of money being poured into solving the issue.  Johnson states that because of these “relationships,” the city keeps funding these “pet projects” that fail to help those who are homeless.  Johnson was also critical of the City Council’s decision to dissolve the Navigation Teams.  Johnson said that approach did work, for they “were able to direct toward shelter (people) that would otherwise have not been served.”  (Seattle Times)

After it was learned that the Washington State Department of Health was using improper data in its originally calculations, which forced six South Central Region’s counties to remain locked down in Phase 1 by Jay Inslee, somebody finally noticed that clearly wrong numbers being provided, which allowed the region to join the rest of the state in Phase 2.  Local officials noticed the error after Governor Inslee announced, last Thursday, that the region was to be held back while the remaining 33 counties in Washington were advanced to Phase 2.  Congressman Dan Newhouse credits local officials for their efforts to expose the error, and that this situation proves again that “it is the local health officials and elected leaders on the ground who are best equipped to manage the ongoing response to the pandemic – not the Governor.” (KEPR – TV and Congressman Dan Newhouse Media Release)

Wenatchee area state representatives are expressing concerns about a possible Road Usage Charge favored by Seattle liberals.  The new fee is being discussed as a possible replacement of the state’s gas tax, since higher performance engines require less gas and thus less revenue for the state.  Representative Keith Goehner (R – Dryden) expressed apprehensions that “the lower income individuals who have to travel because they can’t be close to their work that really end up paying the price.” While Representative Mike Steele (R – Lake Chelan) was worried that those in rural communities will be most impacted by the per-mile charge. “I drive 25 minutes just to get to Costco. It’ll be interesting to see how the disparity aligns along the whole of the state.” (KPQ and Washington Policy Center)

Last week’s Newsmaker Interview was with former state representative, and current analyst with the Washington Policy Center, Mark Harmsworth.  As the disastrous events of the past year have unfolded at Governor Jay Inslee’s Employment Security Department (ESD), Harmsworth has been talking with insiders, and he has a good idea of what allowed one of the largest thefts in American history to take place there last Spring. He describes what needs to be done to correct the many problems that plague the ESD.  Harmsworth also reveals that the Washington State Auditor’s Office is still having difficulties in obtaining the information it needs to perform its investigation. It appears Governor Inslee’s appointed ESD leader Suzi LeVine will dodge responsibility for the investigation’s findings, and was able to use her “privilege” to escape accountability for the mess she created by donating $400,000 to “buy” herself a job in the Biden Administration. (Click to read the full Newsmaker Interview) 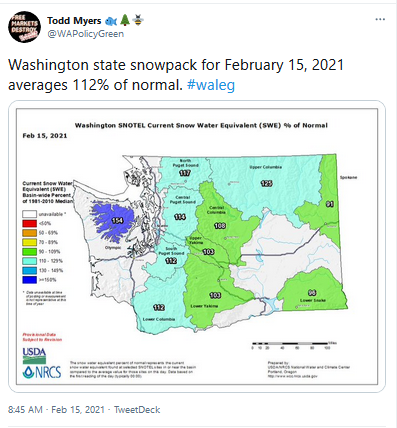 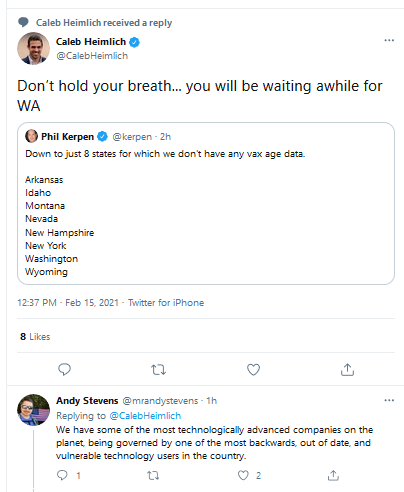