Parents say they are done with the failures of the traditional Washington State school system and are looking elsewhere to educate their children.

Because parents are fed up with Washington State’s traditional schools failing to educate students during the coronavirus pandemic, enrollment is surging in online schools. For many decades, it’s been an unspoken truth in the state capital that the state’s K-through-12 public school system is controlled by the union bosses at the Washington Education Association Thus, the unions’ opposition to innovation has caused our schools to be woefully unprepared to meet the needs of “distance learning.”  Many Washington State students received extraordinarily little actual instruction during the last three months of the school year.  Yet, students enrolled in one of the state’s 48 multi-district online schools continued with their education as usual last spring.  Parents (many of whom are now working from home) have decided to become more involved with their children’s education and are looking favorably to online education. (Shift)

Governor Jay Inslee will be breaking state law unless he either makes across the board cuts to the state’s current budget or calls for a special legislative session to reduce state expenditures.  According to state law, “If at any time during the fiscal period the governor projects a cash deficit in a particular fund or account as defined by RCW 43.88.050, the governor shall make across-the-board reductions in allotments for that particular fund or account so as to prevent a cash deficit, unless the legislature has directed the liquidation of the cash deficit over one or more fiscal periods.” The Washington State Office of Fiscal Management released a report showing that the state will be running a cash deficit of $277 million in August and will have a $1.6 billion debt by the time the legislature is scheduled to convene in January. Even as the governor used a sleazy move to give his contributors in the state employee unions a 3% pay raise last month, and took another raise for himself, observers are wondering what self-serving action Inslee will use now to prolong his lone rule over state government.  (Washington Policy Center, the Revised Code of Washington, and Shift)

A last-minute union-financed ad campaign has attacked Democrat Lt. Governor front-runner Denny Heck for “working on a bailout for Trump’s buddies like Tom Barrack.”  Barrack is a real estate investor and was the chairman on the Presidential Inaugural Committee.  The ads were produced by Unite Here, a group that is financed by unions representing workers in the hotel, gaming, food service, manufacturing, textile, distribution, laundry, transportation, and airport industries.  The newspaper ads direct people to their website which state that one of Heck’s last acts “before leaving Congress (is) helping some of the wealthiest real estate investors in the country score massive taxpayer-funded bailouts while workers in his district are left behind.” (Unite Here website)

Primary election ballots are returning at a 10% higher rate than they did four years ago, when the presidential election year primary drew only 35% turnout.  Thus far county elections offices have received 1.3 million returned ballots (about 28% of the ballots).  Today is the deadline for returning the postage-paid ballots. (Seattle Times)

The Tacoma School District’s computer system was hacked, resulting in 37,600 phishing emails being sent to Pierce County families.  The emails, from the school district, were obvious attempts to hack into the recipient’s computer systems.  The school district sent out warnings via social media telling people not to open the emails. Hopefully they warned Suzie LeVine and the state’s Employment Security Department not to open any of the emails!   (News Tribune)

A rally supporting Seattle Police Officers will be held this Sunday at Noon at Seattle City Hall.  On Monday, the Seattle City Council is planning to vote on its extreme proposal to slash police funding by 50%, which has been demanded by those who forcibly took over six blocks of Capitol Hill (CHAZ/CHOP) in June, and continue to use violence to promote their agenda.  Confident that recent poll numbers reflect that a strong majority of the Seattle public is against the radical measure, law enforcement supporters want to make sure their voices are heard by the councilmembers.  Rally organizers are strongly encouraging all rally participants to follow COVID-19 health guidelines and wear masks. (Seattle Police Officers Guild email and MyNorthwest)

Councilmember Kshama Sawant is upset by reports that support to radically slash Seattle Police Department funding is fading among her fellow far-left Seattle Councilmembers.  The irresponsible councilmember reacted to the withering support for one of her wackier ideas by stating, “I’m not surprised, but it’s quite interesting to see how councilmembers are now displaying how they actually stand and I hope members of the public are watching.”  Sawant fails to understand the irony in her comment. It is because the public is watching (and reacting) that her fellow councilmembers are running away from her dangerous proposals. (KOMO News)

This bears repeating, as many Democrats continue to push endangering the public safety of 775,000 residents by defunding the Seattle Police Department: Washington State’s Democrat “leaders” continue to duck public comment on the controversial issue.  Governor Jay Inslee, Attorney General Bob Ferguson, U.S. Senator Patty Murray, U.S. Senator Maria Cantwell, and even State Democrat Party Chair Tina Podlodowski continue to blast out tweets on a wide variety of issues, but make no mention of the issue that has dominated both local and national headlines.  Democrat leadership at its best evidently.  (As noted previously, we do not link to a news story on this issue, because the mainstream media continues to cover for the Democrats’ lack of political courage by not asking them any questions about where they stand).

A Maltby flower shop owner, who believed forcing his employees to wear facemasks in 80 to 90-degree weather violated Washington State Occupational Safety and Health Administration regulations, has been fined $4,200 by the Washington State Department of Labor and Industries.  The owner of Flower World had previously stated he would legally fight the governor’s orders that mandated all workplace employees must wear facemasks. (Everett Herald)

Eastern Washington University President Mary Cullinan has resigned her position six weeks after the school’s faculty gave her an overwhelming no-confidence vote.  The university is facing tough budget decisions due to lower enrollment and lost revenues related to the coronavirus outbreak.  President Cullinan had originally proposed a revised budget which faculty members believed took too much away from academics and too little away from athletics. (Inlander)

An op-ed in the Yakima Herald advocates for Governor Inslee and state health officials to start working now with industry leaders to bring more people back to work, and relieve some of the negative impact on the state budget caused by the coronavirus pandemic. Associated General Contractors official Joel Bouchey claims that when state health officials worked with construction representatives last spring, they were able to come up with health procedures and guidelines that allowed construction projects to resume, bring workers off unemployment, and create a safe work environment.  The article states that no construction site in the high-infection area around the Tri-Cities has been a source for a COVID-19 outbreak. Bouchey believes this approach can be successful with other industries as well. (Yakima Herald)

Due to an increase in the number of coronavirus patients and staff limitations, the Central Washington Hospital in Wenatchee has had to divert a few patients to medical facilities in Spokane and Seattle.  Just a few weeks ago the hospital was the recipient of diverted patients from Yakima County. (Wenatchee World)

We found it interesting the Washington State Democrat Party would email a survey asking if “Police Reform” was among its supporters “Top Priorities.”  The issue was among nine topics (Health Care, Climate Change, Foreign Policy, etc.) the email specified.  The state party has been noticeably quiet on the police reform issue that has become an internal Democrat battle in Seattle (and elsewhere), as Democrat councilmembers propose radical 50% cuts which the Democrat mayor, and a couple of councilmembers, strongly oppose.  We also thought it was interesting that while Governor Inslee’s emergency orders have resulted in historic unemployment rates and his administration has been an absolute failure in delivering unemployment benefits, the party that used to proclaim to be for the workers makes absolutely no mention of unemployment, the Employment Security Department’s failures, or job security in its list of prioritized issues. (Washington State Democrat Party email survey) 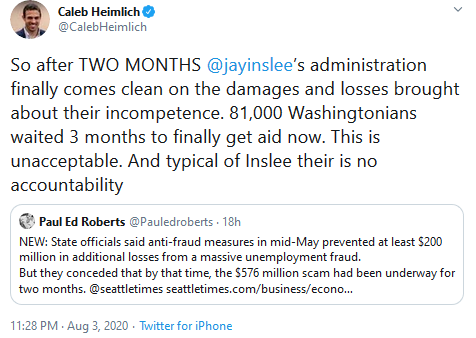