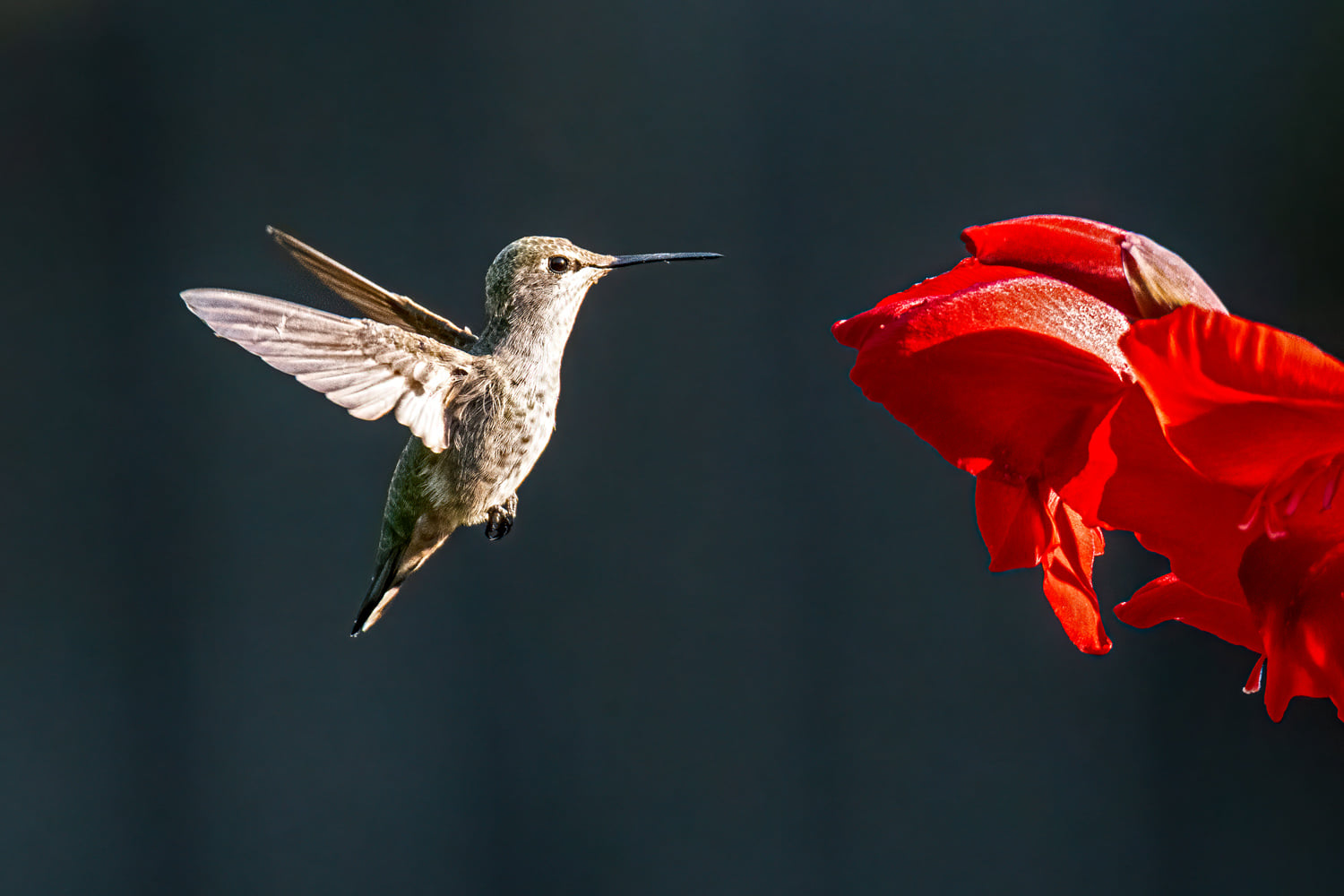 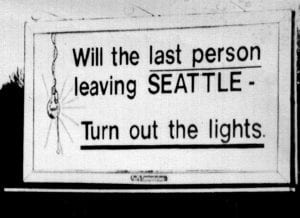 It is clear, Seattle Democrats (supported by the silence of state Democrats) do not care about those who serve as police officers.  Last year, several Democrat Seattle City Councilmembers won elections  promising to increase the police budget and hire more officers to protect residents, up to 7 of them now support a 50% slash in city’s law enforcement budget and the subsequent firing of hundreds of police officers. To Seattle (and apparently all Washington) Democrats, the votes of law-abiding citizens are meaningless when violence and destruction determine public policy. While businesses and residents depart Seattle, those who crave a lawless community will move in (just like Seattle’s homeless policies have made it a destination city for America’s discerning homeless individuals). (Shift)

Washington State’s online schools are experiencing a surge in enrollment due to the lack of preparedness to educate students in the state’s traditional schools.  Washington State’s education policy has long been determined by the special-interest needs of the union bosses at the Washington Education Association (WEA), and thus options and innovative have been limited for students and their families.  When Washington schools were forced to move to “distance learning” last spring due to the coronavirus pandemic, many school districts were woefully unprepared.  Meanwhile, the tens of thousands of Washington students who were already enrolled in one of the 48 multiple-district online schools were able to complete their studies as usual.  The Seattle School District (and a few others) handed out meaningless straight A’s to students to make up for the school system’s incompetence, while online schools handed out grades that will be respected by college admissions’ offices.  Meanwhile, Superintendent of Public Instruction Chris Reykdal has failed to learn from the past mistake of his office’s strict obedience to the WEA’s union bosses which left our state’s schools unprepared.  His 123 person “Reopening Washington Schools” workgroup is filled with many union officials and state employees, but does not include a single individual from the online schools.  As the new school year approaches, many parents are currently looking to escape a system that serves the needs of the teachers unions first and are now looking at online schools (and other options) for their children. (News Tribune, List of Online Schools, and Reopening Washington Schools workgroup membership list)

Reminder that tomorrow is the due date to get your ballots in the mail for the 2020 Primary Election.  There are many important primary battles for statewide (Governor, Attorney General, and Lt. Governor all have competitive races) and local offices (like Pierce County Executive). If you have questions, the Secretary of State’s website is a good resource. (Secretary of State Frequently Asked Questions)

Even as the Democrats on the Seattle City Council continue to ignore their promises made during the 2019 campaign, they are finding it difficult to keep the much-more-recent promises made to the rioters to immediately reduce police funding by 50%. Councilmembers who campaigned last year on promises to increase the police budget and hire more police officers have now caved into the “public safety” demands of the unhinged Left. Yet, due to the city’s collective bargaining agreements with police unions, the councilmembers are evidently just now figuring out they are unable to fire the hundreds of police officers needed to meet the protestors’ demands. One would think that a responsible public official would have taken a look at the collective bargaining agreement with the Seattle Police Guild before promising protestors they would slash 50% of the budget – but then “responsible” is not an adjective that very often precedes “Seattle City Council.” (Seattle Times and MyNorthwest)

A liberal Seattle polling firm has revealed that only 32% of Seattle residents support the Seattle City Council’s proposal to reduce the police budget by 50%.  The poll was conducted last week of 500 “likely” Seattle voters by EMC Research (whose website lists many liberal candidates and organizations as clients, including the Democrat Congressional Campaign Committee and the City of Seattle). This is the latest poll to reveal the extreme actions by the Democrats on the Seattle City Council do not have the support of the public – even in very liberal Seattle. (MyNorthwest and EMC Research clients’ list)

A Seattle Police Guild’s “StopDefunding.com” email states it has collected more than 130,000 online signatures from those who oppose the Seattle City Council’s plan to cut 50% of the police budget.  The overwhelming success led the Guild to set an updated goal of 250,000 signatures before next Monday’s council meeting.  You can add your name to the petition by clicking here. (StopDefunding email and StopDefunding.com)

This is still a story: Washington Democrat politicians remain silent over the extreme and divisive actions being promoted by their fellow Democrats on the Seattle City Council.  Washington State Governor Jay Inslee, U.S. Senator Patty Murray, U.S. Senator Maria Cantwell, Washington State Attorney General Bob Ferguson, and even Washington State Democrat Party Chair Tina Podlodowski, have failed to say whether they agree with the 50% cut in police funding being promoted by 7 of the Democrats on the Seattle City Council.  While each of these politicians are always eager to find microphones to tell Republicans to condemn the worst actions of the far-right, not one of them is willing to follow their own guidance (“Please take my advice, I am not using it”) and condemn the extreme policy that will impact the personal safety of 775,000 Seattle residents. (Again, there is no link to a media story on the silence of the Democrats on the defunding the police issue which has dominated local headlines. The double standard of the media has been revealed, yet again, on this issue.  It is widely accepted the local media would demand Republican officials comment on such a divisive issue supported by the far-right of the GOP).

Lynnwood area residents stood up to protestors who wanted to cause havoc at the residence of Seattle Police Chief Carmen Best on Saturday evening.  200 Black Lives Matters protestors (described in media reports as “mostly white men and women in their twenties, were dressed in black with masks and black hoods”) were thwarted by local residents as they attempted to protest at Best’s home.  Her neighbors pulled their vehicles onto the street denying the protestors (some of whom were carrying suspicious materials) access to the neighborhood.  Snohomish County Sheriff Adam Fortnay said in a written statement, “protestors targeting one individual’s house is a bullying tactic that will certainly require an extra patrol response to ensure every resident in Snohomish County can feel safe in their own home.” (Lynnwood Times)

Businesses along Everett’s Rucker Avenue have been hit with a double whammy as coronavirus-related restrictions hit in March right after the completion of a much-delayed street renewal project.  Business owners say the refurbished street looks nice with wider sidewalks and center dividers, but pedestrians have not returned to the neighborhood after they experienced many delays during the year-long construction project. (Everett Herald).

Many South-central Washington wineries and breweries were finally open to the public this past Saturday.  Previously only the Benton, Franklin, and Yakima county establishments which provided food could serve customers in outdoor settings.  State officials revised guidelines last week and now allow the remaining wineries and brewers to also serve their customers. (Yakima Herald)

As more people adhere to health guidelines, Yakima County continues to see a steep reduction in new coronavirus cases.  The county has been responsible for approximately 20% of the state’s 57,000 cases, and was recording over 200 new cases daily until a couple of weeks ago.  The Yakima Health District has now reported less than 81 new cases for eight straight days, with just 41 on Sunday. (Yakima Herald)

The Tri-City Herald editorialized that the public needs to be patient for positive results from local individuals adhering to strict health guidelines.  While the number of new cases is flattening out, which health officials claim is the result of people wearing facemasks in public, some believe the numbers should be dropping by now.  The newspaper said, “Wearing masks and social distancing will help us slow the disease. However, it won’t happen overnight. That’s why we must not give up our efforts — the consequences of not staying the course will be even more devastating.” (Tri-City Herald)

As Democrats move further and further to the extreme left before tomorrow’s primary, 10th Congressional District candidate Marilyn Strickland is promoting the fact that Los Angeles-area Congresswoman Maxine Waters is supporting her campaign.  In a last-minute email blast, the Strickland campaign sent out a note from Waters saying she supports Strickland because “Marilyn has been a champion for South Puget Sound.” Which begs the question, has ethically-challenged Waters been to the South Puget Sound? (Strickland Campaign email) 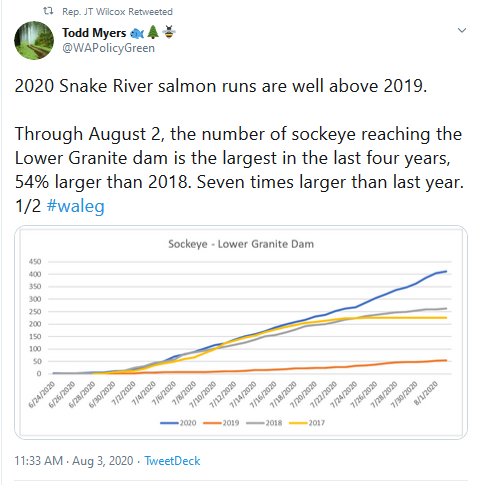 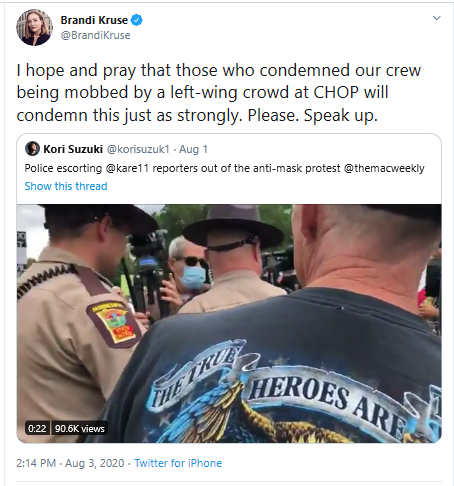 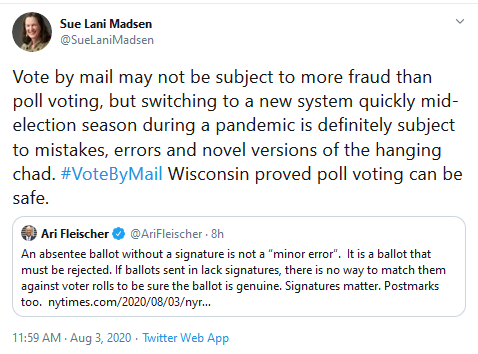