Democrat senators tell “conflicting stories” why the Low Carbon Fuel Standard (which will raise gas prices) was not sent to the Transportation Committee. 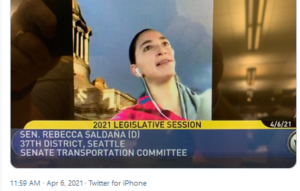 Democrat Senator Rebecca Saldana of Seattle is the latest liberal legislator to commit legal infractions, which she helped to pass in the legislature.  It is interesting to note that Senator Saldana’s latest approach to legal matters is consistent with her sponsoring legislation to waive suspension of drivers’ licenses for failure to pay fines.  Other Democrat legislators rushed to Senator Saldana’s defense after her infraction became viral on social media, which indicates, like previous “mistakes” by liberal legislators, this one that endangered the lives of the motorists and pedestrians unlucky enough to be near the distracted Senator Saldana and her car, will go unpunished and will be swept under the proverbial rug. (Click to read full article and Twitter)

At least one Democrat member of the Senate is not being honest with the public, as Senator Christine Rolfes (D – Bainbridge Island) and Senator Steve Hobbs (D – Lake Stevens) provided conflicting accounts for why the controversial Low Carbon Fuel Standard (LCFS) bill did not follow standard protocol and be sent to Senator Hobbs’ Transportation Committee.  Since the bill (HB 1091) will dramatically increase the cost of the “transportation fuel” (estimates are as high as 62 cents more per gallon for gas) mentioned in the bill’s title, it makes sense that HB1091 should be debated by the Transportation Committee (as similar bills have in the past three years).

Yet, Democrat leaders were fearful that Senator Hobbs, who understands the devastating impact the LCFS bill would have on low-income workers, and that it is an inefficient and costly method to very slightly reduce carbon emissions, would have either killed or amended the bill in his committee.

When asked why HB 1091 was not sent to Senator Hobbs’ committee, Senator Rolfes, who chairs the Senate’s Ways & Means Committee stated, “due to timing, the chair of transportation thought that was fine (that the bill bypass his committee), he didn’t need to rehear it.”  The person who allegedly said that, Senator Hobbs, has a strikingly different recollection of what took place.  He said, “I have a disagreement with leadership. I think it should have been heard in my committee. It would have gotten out… with amendments.” (Cornfield Report/Everett Herald, Washington Police Center, and Washington Legislature Bill Summary)

While state legislatures around the country have amended their emergency powers laws (in bi-partisan fashion) during the pandemic, Washington State Democrat legislators have ignored calls from Republican lawmakers, local health officials, local elected officials, and nearly every major newspaper in the state to place some restrictions on the powers a governor has during an emergency.  It is agreed by nearly all observers that governors should have a 30- or-60-day period to deploy the resources of the state to respond to a crisis. It is also nearly universally agreed (except by Washington State Democrat lawmakers) that these powers should not just continue without time limit, or without the involvement of the people’s elected representatives in the legislature.  A recent study reveals that Washington State is one of the worst states in the country for the amount of unchecked power our governor wields during an emergency.

Yet, with time running out on the 2021 legislative session, it appears the Democrats are content to have Washington State residents continue to be the obedient subjects of a dictator during an emergency, and thus allow Governor Jay Inslee the power to continue issuing his random “emergency” orders for as long as he sees fit.  This seems like a very bizarre strategy for separately elected officials to pursue, for if they agree with the governor’s actions, they can always simply rubber stamp their approval since they control both chambers of the legislature.  Yet, instead they have set the precedent for a future Republican governor to act indefinitely and arrogantly without legislative involvement. (MinnPost and Maine Policy Center)

Democrats in the legislature seem strangely fond of the failed public safety policies of the City of Seattle, and are trying to impose similar restrictions on law enforcement across Washington State.  Despite the severe rise in violent crime, the departure of a couple hundred well-trained and ethnically diverse police officers, and a (liberal) Seattle population increasingly concerned about public safety, the Democrats in the Washington State Senate have passed many of the same restrictions (HB 1054) that the Seattle City Council approved when they caved into the demands of liberal rioters last summer. (MyNorthwest and Washington Legislature Bill Summary)

Remember When: Seattle City Council President Lorena Gonzalez led her fellow councilmembers in caving into the demands of liberal political rioters and irresponsibly “defunded the police” while crime rates in the city were skyrocketing.  Now, however, Crosscut reports that the ultra-liberal councilmember rarely uses the term “defund the police” now that she is campaigning for mayor.  Instead Gonzalez provides the vague statement, “I continue to believe that there are better ways to prevent crime from happening in the city than hiring a thousand new officers.” Maybe it would have made better public policy to determine what these “better ways” were (and maybe tested them to see if they actually worked) before slashing the police department’s budget and risking the public safety of the 750,000 city residents she took an oath to serve and protect. (Crosscut)

As Boeing continues to move its high-paying jobs to states which want them, it has placed a “For Sale” sign on its Longacres campus in Renton.  This is the latest of several moves the major employer has taken to weather the financial crisis, as Boeing has faced severe downturns in the travel industry and expensive problems with its 737 Max model.  So, it is to be expected that the first place Boeing has looked to cut expenses is in the state where the governor went on national television and equated the company to “blackmailers” and “muggers”, just in order to obtain a sliver of attention for his then-failing presidential bid.  (Seattle Times and KUOW/NPR)

The City of Olympia is paying to remove the “sea of garbage” at a homeless encampment but leaving the people who have caused the problem (do they expect more garbage?).  More of Olympia’s tax dollars are being spent to clean up the filth along Deschutes Parkway SW, near Capitol Lake, and the city officials have stated they will continue to use other people’s money to keep the area clean.  The once-popular spot for walkers and runners has been taken over by the illegal encampment. The city says those who have caused the problem will be allowed to stay, and eventually the city will send in “case managers” to move the “campers” into permanent housing. (KOMO News)

Wolves gonna be wolves, as shown by another attacks attributed to the Leadpoint wolf pack in Northeast Washington.  This is the 13th livestock attack attributed to the pack in the past nine months.  Previous attacks led to consideration of lethal removal of a member of the pack, but Washington State Department of Fish and Wildlife (WDFW) Director Kelly Susewind ruled against it.  It is not known if the latest attack will result further useless contemplations by WDFW bureaucrats. (Pacific Northwest AG Network)

The mass COVID-19 vaccination site at the Benton County Fairgrounds has plenty of available appointments this week.  The site also does not require proof that vaccine recipients are eligible under state classifications for the vaccination. This is what eventually happens if you try to follow all of Jay Inslee’s random “emergency” orders – you just stop.  (YakTriNews) 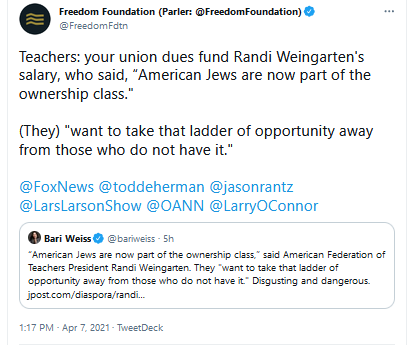