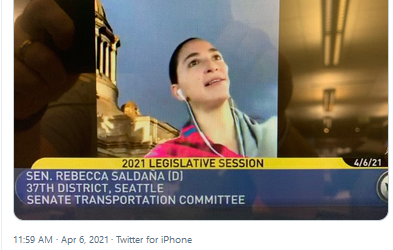 In what seems like irony, but is really just typical Democrat arrogance, State Senator Rebecca Saldana was caught on video, driving her car while testifying in a Senate hearing – which observers noted was in violation of several Washington traffic laws. Given this regard for the law, it’s perhaps very consistent that Sen. Saldana is a sponsor of legislation (Senate Bill 5226) to waive license suspensions for unpaid tickets.

Rules for thee but not for me.

Sen. Saldana’s hastily prepared “non-apology” shows she realized, after the fact, that it probably wasn’t a smart choice combining driving and legislating on video at the same time. Saldana claimed, in her statement, she was really busy and was just trying to juggle her personal life with work.

Cue the crocodile tears. Her only job is running for the part-time office that is the state legislature. It’s not like this former union organizer has a full-time gig going anywhere.

The issue for the good senator is not that she broke the law, rather the issue is she got caught.

Showing his true hyper-partisan Democrat colors, Democrat Senator Marko Liias attempted in a press conference later in the day to defend his colleague, justifying her actions and stating the Democrats were ready to move forward and put the incident behind them. Liias, himself no stranger to personal controversy, would prefer people just move on from past mistakes, like when he ran for State Treasurer in 2016, despite having shown his ability to handle money by filing for bankruptcy a few years earlier.

Chris Sullivan, the voice of traffic on KIRO Radio, tweeted “So much for #VisionZero” in response to Saldana’s “driving while legislating”. Vision Zero is the un-serious Democrat plan to reduce serious road accidents to zero by using hashtags to talk about it, not actual real-world solutions. While laudable in its goals, it’s totally impractical. The only way to achieve the goal of zero accidents is to stop driving, something which even Left-wing Democrat Senators apparently are not willing to do. At least while they are lecturing their fellow citizens on how to live.

Sen. Saldana isn’t the first to get caught doing something dumb in a car while supporting legislation to the contrary. Back in 2014, Democrat Representative Roger Goodman was accused of smoking marijuana while driving his kids around, admitting as much in texts to the ex-wife who made them public. Rep. Goodman sneaked his way through re-election and continues to be rewarded by his colleagues with the chairmanship of the House Public Safety Committee, despite his own lack of regard for public safety (at least while he’s driving).

Or consider Democrat Representative Tim Ormsby who, after an afternoon of writing the state budget and drinking beer a few years back, drove a jeep into a ditch and was charged with DUI. Rep. Ormsby didn’t even lose his chairmanship after the accident. Democrat House Majority Leader Pat Sullivan dismissed the transgression at the time by saying (seemingly with a straight face) “We take this very seriously. We’ll have this conversation in our leadership team. It’s a group decision.”

In other words, if we can get away with not doing anything at all, we will.

And we wonder why the state budget is in such a mess.

And finally, at least for this article, recall Democrat Senator Manka Dhingra and her attempt to legalize heroin, meth, cocaine, and other hard drugs with the introduction of Senate Bill 5476. The bill shows just how badly the Democrats are trying to legalize a variety of behaviors which the majority of Washingtonians find objectionable.

Democrat legislative behavior during this “virtual” session, with voters overwhelmed and paying little attention after a year of COVID, clearly demonstrates an abject disregard for the very laws they pass and impose on everyone else.

It truly is one set of rules for them and another for everyone else.