The “miles ahead” proposal introduced by Democrat Transportation Committee Chair Representative Jake Fey looks more like “lagging behind” when you start digging into the details.  The bill (HB 1564) would create a carbon account that specifically calls for money to be spent on reducing miles travelled in your car, a reduction in fuel efficiencies for freight transportation, and construction of even more expensive state ferries.  All of Representative Fey’s bad policy (and math) adds up to a lot more of your taxpayer dollars spent for Democrats to decide how you go to work, school, and recreation. (Click to read full Shift Article)

In the latest instance of an urban Democrat falsely claiming to have the support of the agriculture community for their expensive environmental projects, state Senator Reuven Carlyle (D – Seattle) is unable to provide proof to support his claim that Washington State farmers are “enthusiastic supporters” of his cap-and-trade bill.  During a recent meeting of the Senate’s Environment, Energy, and Technology Committee, Senator Carlyle (who chairs the committee) stated that the agriculture industry supported his cap-and-trade bill (SB 5126) “because they’re receiving funding for reforestation programs.”

This false statement shocked many people who are active in promoting farming interests in Olympia.

The Washington State Farm Bureau’s government relations director Tom Davis said, “I’m not aware of any agriculture organization that has been supportive”  of Sen. Carlyle’s silly bill. Ben Buchholz, who represents agriculture groups including Food Northwest and the NW Grain Growers, stated, “I don’t know where Senator Carlyle came up with that” claim. WA State Cattlemen’s Association and WA Potato & Onion Association lobbyist Mark Streuli stated his clients will be opposing the bill.

False claims are not new when Democrats are talking about the environmental schemes. Previously Governor Jay Inslee lied about the state’s agriculture community supporting his expensive and inefficient Low Carbon Fuel Standard (LCFS) legislation, claiming the biofuels required by it would increase the demand (and price) for corn.   The problem is, Washington State farmers do not grow much corn.  In fact, if the governor had bothered to check, he would have found out that our state ranks 31st in the country (behind even Delaware) for the amount of corn it grows. The truth is that the agriculture community is one of the most active voices against the governor’s LCFS bill, but Inslee would rather you not know that. (Capital Press, Washington Legislature Bill Summary, and USDA/Beef to Live)

After Republican legislators, health officials, and hospital administrators had previously called on Governor Inslee to open up immunization eligibility for all adults, he finally strayed from his previous plan, and announced that everyone will be authorized to receive the vaccine beginning in two weeks (after President Joe Biden told him to do so).  Hospital operators were most critical of the governor’s stubborn refusal to not provide vaccines to younger adults, saying it could prevent the current upsurge in cases. Even the president of the left-leaning Washington State Hospital Association said, “The states that are seeing an uptick are seeing transmission fueled by people in that 25, 30, 35 age range — they’re not eligible but they’re spreading it.”  Thirty other states have already begun vaccinating all adults. (MyNorthwest and KIRO7 News)

Attorney General Bob Ferguson is, of course, not part of the multi-state collection of AG’s suing the Biden Administration over language in the America Rescue Plan federal bailout plan.  Ferguson, who jumped in front of every camera within 20 miles to announce his 80+ lawsuits against the federal government while President Donald Trump was in office, was noticeably missing from the litigants who are concerned that language in the federal “stimulus” bill might prevent states from allowing tax cuts over the next five years.   Sadly, maybe Ferguson decided to not waste his staff’s time knowing there is no chance that a tax cut would be signed into law while Jay Inslee was governor.  Yet, it still would have been appreciated if the AG put as much time into standing up for Washington taxpayers as he did in his numerous lawsuits protecting those in the state illegally. (AP/Vancouver Columbian)

Statewide mental health-related visits to emergency departments by those aged 5 -17 jumped 31% last year, even as the Washington Education Association and its local chapters selfishly ignored health professionals’ guidance to return students safely back to in-person instruction.  This data from the Washington State Department of Health is only for April – October of 2020, compared to the same time period in 2019.  The figure is expected to be even higher for the months after November. (Spokesman Review)

In a long-delayed decision, the Washington State Supreme Court finally got around to announcing it unanimously found that three charges brought by supporters recalling Seattle City Councilmember Kshama Sawant were legally sufficient to proceed with the effort to remove her from office.  The court found the charges that Sawant used city resources to promote an initiative campaign, that she disregarded state COVID-19 orders by opening city hall for protestors to gather, and that she knowingly led protestors to the legally protected address of Mayor (and former U.S. Attorney) Jenny Durkan “are factually and legally sufficient to support recall.”  The court ruled that a fourth charge, of delegating her office’s employment decisions to an outside organization, did not meet this threshold. The recall campaign now has 180 days to collect 10,000 signatures from registered voters in the city’s 3rd council district, which would place the issue before the voters. If this is accomplished, the recall vote will most likely will appear on the August primary election ballot.  Click here if you want to learn more about the recall effort.  (Washington State Supreme Court decision, Seattle Times map, and Recall Sawant Campaign)

Texts obtained by KTTH host Jason Rantz show that Seattle City Councilmember Kshama Sawant waited eight days to issue a press release about police not “acting urgently” enough on email threats she received, in order to gain more publicity for herself.  Sawant, who originally never called filed a report about the threats (which the police were informed about by reading her first press release), delayed her second release by over a week to make sure reporters covering city hall were not distracted by other events.  In the texts obtained by Rantz, council communications staff advised Sawant’s staff to wait a few days to issue the second release, since the media was covering the council’s action to provide hazard pay for grocery workers and the multiple candidates announcing they were running for mayor. Since the police department quickly tracked down and arrested the individual responsible for the threats against Sawant, it appears the one person who was not “acting urgently” in this matter is the councilmember herself.  (MyNorthwest)

As businesses continue to move workers out of the anti-business cesspool created by Seattle’s liberal establishment, Amazon has begun construction on its 43-story “600 Bellevue” building.  Crews have begun demolishing the parking garage currently at 600 108th Ave NE, to prepare for the construction of the 885,000-square foot office space.  Since Seattle plans to tax the company for all employees who make more than $150,000 a year, it is logical to believe that most of Amazon’s higher-paid employees in the region will eventually be relocated to the Eastside. (Seattle P-I) 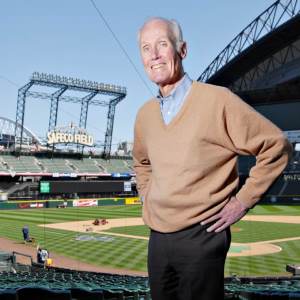 We could not let the Seattle Mariners’ Opening Day pass without mentioning the man who twice saved Major League Baseball in Seattle — Senator Slade Gorton.  Slade’s steady wisdom is certainly missed during these times.  We know that somewhere tonight, the Senator is with his beloved Sally, keeping score and believing this is the year the Mariners will win the World Series.

Even while Democrats keeping pushing new taxes and legislation which will increase the cost of farming in Washington State, potato growers are learning that they will be receiving even less for their product on the market.  The continued slow retail sales in hospitality markets – think french fries – means there will be less demand for potatoes, and the biggest processors will be paying 3% less this year.  While the governor mistakenly believes many Washington farmers will grow rich on biofuels by growing corn (see story above in the State section), we wonder if he knows the state is just behind Idaho for potato production, and is responsible for more than 20% of the potatoes grown in the United States. (KNKX and World Atlas)

Energy Northwest of Richland signed a deal with the engineering company X-energy and the Grant County Public Utility District to construct and operate a new nuclear power reactor at the Hanford site.  The 80-megawatt reactor could be operational within seven years.  The new design provides more flexibility and could be used to offset the fluctuation in power provided by solar and wind power generation.  The deal also provides for expansion of the project to a four-reactor, 320-megawatt facility. (Tri-City Herald) 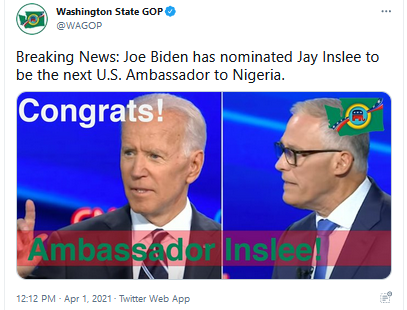