Governor Inslee fails to deliver the promised results of his expensive environmental policies.

Many of Seattle’s 500 parks have been taken over by homeless encampments, making them unusable for many city residents.  This is the latest example of liberal Seattle’s failed homeless, drug, and crime policies. These policies have only proved successful in making government employee unions wealthier as the number of government employees needed to “solve” the problem increases. Meanwhile, thousands continue to live the cruel consequences of liberal policies the Left created and are now enabling. (Shift Quick Take)

Washington State’s greenhouse gas (GHG) emissions continue to climb despite the enactment of Governor Jay Inslee’s policies, which he promised would reduce emissions.  In the latest example of Inslee’s environmental policies failing to improve the climate, data reveals that the state’s CO2 emissions increased in 2018 by 1.4% to 98.9 million metric tons (MMT). This despite Inslee’s Department of Ecology promising to reduce emissions to 93.5 MMT.  Since Inslee’s election as governor in 2012, the state’s CO2 emissions rose by 8%.  While per capita emissions from across the United States fell 5% between 2012 and 2017, Washington State’s per capita emissions fell just 1%.  Many are ignoring the growing list of environmental failures during Inslee’s reign as governor. After all, he is considered a front runner for an environment-related post within the Biden Administration. The failures prove the Peter Principle is real – liberals are not seeking climate solutions but are using the climate crisis as an excuse to raise taxes and increase the size and power of government. (Washington Policy Center and Peter Principle definition)

Governor Inslee and his wife Trudi will be addressing the state this evening at 5:30 PM.  It is expected the governor will be announcing new measures to stop the increase in the number of COVID-19 cases.  We are not sure why the governor’s wife is needed for this address, but the governor’s office has stated, “The governor and Trudi Inslee will not take questions from the media after the address.” Likely Inslee’s handlers are concerned a media member will ask if the many liberal protests before the election and the subsequent public rallies celebrating Biden’s presidential victory were a contributing factor in the rise in the number of cases. (TVW)

Thirty million N95 masks sit in an undisclosed state warehouse while medical professionals desperately need new masks. In the latest example of poor management by the Inslee Administration, reports indicate those masks have not been delivered, as promised, to health care workers. Reports also reveal that the state spent $90 million on the masks despite being too large for the female health care workforce.  Yet, those who could use the masks continue to use up the current supply designated for those with smaller faces. (Seattle Times)

The Recall Kshama Sawant campaign has announced they now have yard signs, and they are taking orders for delivery this weekend.  The announcement does not state if they will deliver outside of the 3rd City Council District (which encompasses the Eastern portion of the city from the Montlake Cut to just south of I-90).  If you do not reside in this area, please forward the link to friends and associates who either live or work in the district. (Recall Sawant Yard Sign request form and Seattle’s 3rd City Council District Map)

The number of protests to safely reopen schools grow as more students and parents are concerned about children’s mental health and their academic progress during distance learning. On Wednesday, protestors gathered at the busy NE 8th and Bellevue Way intersection, calling for the Bellevue School District to institute hybrid learning that includes some in-person instruction.  Even though many health officials (including those from the State of Washington) have stated that partially reopening schools does not increase the number of COVID-19 cases, many school districts are concerned about the state’s restrictive liability laws.  Yet because of Governor Inslee’s stubborn refusal to bring the legislature back into special session, lawmakers were unable to amend the liability laws to enable school districts to resume in-person instruction. (Seattle Times and Eli Sports Network)

State Farm has announced that its 1500 employees who work from its DuPont operations center will permanently work from home.  The employees have not been coming into the company’s South Pierce County offices since the state’s stay at home orders in March.  This is the latest example of how workplace changes will impact public transportation priorities. (News Tribune)

Washington State Representative Jenny Graham (R-Spokane) is slowly recovering from COVID-19 and is now recovering from a related case of pneumonia.  Despite being infected with the virus, Graham does not support tighter government restrictions to slow the virus’s spread.  Graham said, “Shutting things down is absolutely not in the best interest” of the state.  Last week Graham was in isolation when she won re-election to her second term. (Spokesman-Review)

“Zoom Bombing” has become a serious annoyance during the coronavirus epidemic and is now receiving the Federal Bureau of Investigations’ attention.  Nearly everyone has experienced the childish antics of “bombers” who interrupt publicly listed events (such as community forums, entertainment event, candidate debates, faith services, and even Alcoholics Anonymous meetings) by screaming profanities, insulting people’s appearances, shouting racist and sexist comments, and displaying pornography.  Yesterday Shift wrote about a City of Edmonds community forum, which was interrupted three times and led Mayor Mike Nelson to ask the FBI “for cyber assistance to track down the perpetrators.” Today we learn that the FBI will investigate interruptions to a Gonzaga University Black Student Union meeting on Sunday.  Students say they could capture the IP addresses of those who “hijacked” the online video feed. (KXLY and Everett Herald)

The Wenatchee School District is planning to move forward with returning students to the classroom. Starting November 2nd, the district brought back Preschoolers through 2nd graders to a hybrid schedule with no new COVID-19 cases.  On the Monday following Thanksgiving (November 30th), the district plans to add 3rd to 5th grade students.  The district superintendent says he is aware of the recent increase in coronavirus cases. Yet, many people believe that schools may be a safer place for young children with the health and safety precautions the district follows.  Middle and High School students are scheduled to return to class on January 26th. (Wenatchee World)

If Governor Jay Inslee is provided the opportunity to join the Biden Administration (which is a long way from a certainty) and break yet another promise to Washington State voters. In that case, it is generally agreed he will leap at the chance.  Should Inslee bailout, Lt. Governor-elect Denny Heck will become a temporary Governor, and a special election will take place to fill out the remainder of the four-year term. Many of the state’s major political players, from both sides of the aisle, will be eyeing the race.  Shift provides the first breakdown of who might be running to become our state’s next governor. (Shift Article)

Democrat King County Executive Dow Constantine will be holding his “annual 39th Birthday Party” next Monday.  There is nothing special about the “virtual” fundraiser, except we find it very silly that a grown man entrusted with spending over $12 billion in taxpayer money cannot admit he is turning 59 this weekend. (Constantine fundraising email) 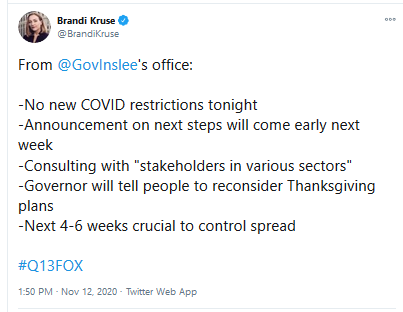