On August 23rd, The New York Times published a piece entitled “Seattle Has Figured Out How to End the War on Drugs.” Columnist Nicholas Kristof claimed that the city is “pioneering a bold approach to narcotics that should be a model for America.” The man ascribed to this heroic accomplishment is King County prosecutor Dan Satterberg, who is venerated for his radical catch-and-release/decriminalization approach to law enforcement. In 2018 Satterberg announced that his office would stop prosecuting people caught possessing a gram or less of street drugs; a decision lauded by the author for its significance in saving countless lives from addiction and fatal overdoses.

To those of us who live here and see first hand the devastating consequences brought by unchallenged liberal policies and radical social experiments such as this, Kristof’s ivory tower assessment is repugnant. The fact that this piece, which was read by millions of people, declared Seattle’s approach to be a model for America is outright dangerous.

For nearly a decade, Dan Satterberg has gradually been replacing the rule of law in Seattle with his own altruistic philosophy of tolerance. He’s used his powers as lead prosecutor to ignore the laws he doesn’t like and determine who is and is not deserving of justice. In 2018 he even bragged about having one of the lowest incarceration rates in the country. Satterberg’s refusal to jail criminals is a big reason why police officers in King County are leaving in droves and Seattle has devolved into a lawless sanctuary for addicts and criminals. It’s why the Washington State Fraternal Order of Police recently issued a public statement addressing concern for both the public and law enforcement officer safety given the failure of the King County Prosecutors Office to file charges on dangerous repeat offenders.

Conveniently, the NYT piece decided to ignore the mountain of evidence revealing the true outcome of Seattle’s legal nihilism, claiming “it’s too early to have reliable data from the decriminalization experiment.” The statistics we found, however, are staggering. For starters, the claim that this approach is saving lives is blatantly false. 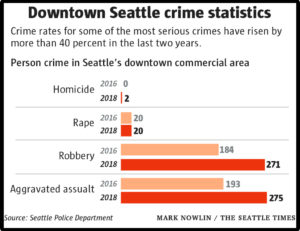 These are the statistics which are rarely told. The truth regarding the state of a city dominated for years by left-coast regressivism is buried in a narrative that is manufactured and paid for by the Seattle activist class – the political and cultural elite of elected leaders, nonprofits, media, and billionaire influencers. Veteran KOMO reporter Eric Johnson found out just who they were after he released a shocking hour-long documentary called Seattle is Dying. (a spectacular, must-watch piece of journalism) Shortly after the piece aired, the activist class along with city leaders launched a coordinated counter-attack to discredit Johnson and control public opinion. Something to keep in mind whenever you see polling or messaging that is created by their hired PR firm Pyramid Communications.

Politically-driven news media like The New York Times provide cover for the unaccountable Seattle leaders who’ve been carrying out their delusional social experiments in this city for at least a decade. How long will taxpayers continue to fund them only to watch a once beautiful city be destroyed? When will citizens realize that after throwing billions of dollars into solutions, NOTHING has improved? Just this week, Kshama Sawant proposed increasing these disease-ridden homeless encampments from 3 to 40. Mayor Durkan announced plans to spend $1.6 million on police retention while refusing to acknowledge the fact that she, City Council, and the city’s disdain for the rule of law is what drove them away. All one has to do is read some of their exit interview  comments:

Decriminalization has been a colossal failure in Seattle, but those responsible will never admit it. The Left will continue to lecture law-abiding citizens about systemic racism and the injustice of  prosecuting drug offenders but will never talk about the disproportionate rate of property crimes and violent, drug-fueled assaults that accompany that lifestyle. Until Seattle stops tolerating and subsidizing criminal behavior and stops enabling addiction by allowing open drug use, this public health/crime/drug epidemic will continue to grow.