Just as the recent release of emails shows that the national rollout of Obamacare was prone to deception, our SHIFT investigation shows the same shady approach being used in Washington State prior to the shaky launch of the Washington Health Benefit Exchange (HBE). 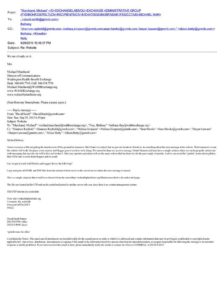 Newly-obtained email evidence proves that top exchange officials knew the state’s Obamacare website was not fully operational prior to its October 1 unveiling. Looking out for purely partisan interests, HBE officials engaged in deceptive tactics in order to cover up the website’s issues. These emails show that exchange officials and their consultants conspired to hide the website’s problems before the media’s preview on September 30.

The weekend before the website launch, HBE Communications Director Michael Marchand corresponded with one of the exchange’s outside advisors, David Smith of GMMB – a high-powered Democrat political consulting firm with offices in both Seattle and DC – on how best to spin a re-occurring error message on the website.

Instead of considering the impact on Washington State consumers of launching a faulty health care site that would be prone to errors and shutdowns, Smith wrote on the evening of September 29:

“…it is critical that we get our friends at Deloitte to do something about the error message at the website… the website will be the first place every reporter and blogger goes to see how we’re doing. We cannot let them see an error message. I think Shannon and team have a simple solution where we can keep up the interim site with messaging that says the site will be live on October 1. That way reporters and others will see the same website that has been live for the past couple of months….” 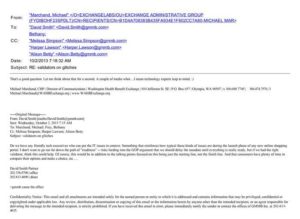 Marchand responded, “We are already on it.”

The cover up efforts continued post-launch. Smith, who was presumably hired because of some issue expertise on a public contract paid for with tax dollars, instead had his focus on a partisan strategy to try and make the website look good. In an October 2 email exchange Smith wrote to Marchand:

“Do we have any friendly tech executives who can put the IT issues in context. Something that reinforces how typical these kinds of issues are during the launch phase of any new online shopping portal. I don’t want to go too far down the path of “readiness” – risks feeding into the GOP argument that we should delay the mandate until everything is really ready, but if we had the right validator, think this could help…”

Marchand, who evidently doesn’t think any more highly of the friendly tech person he would connect with the media than he does of some reporters, responded by indicating he would get a “media whor-” ready to go.

Perhaps the state’s taxpayers shouldn’t have expected anything less than partisan advice from GMMB, given that the firm was the media buying team for Jay Inslee’s “independent expenditure” SuperPAC last year. In addition, the firm’s founder, Frank Greer, is known for his work in helping to elect both Bill Clinton and Barack Obama, and was credited by a local reporter with aiding Inslee in 2012 also.

We have also exposed the Health Benefit Exchange ignoring at least one reporter with tough questions and the extent to which the Inslee Administration would go to cover-up the abysmal enrollment numbers. Of course, after all this the director of the exchange was given a retroactive pay raise.