Bar for raise as low as ObamaCare

People in the private sector might wonder what it takes for a government official to get a 13% raise, given the precarious state of our state’s budget. Well, wonder no more, as our on-going review of public records show that for Richard Onizuka, it was a performance review that could be called “good enough.”

Just two weeks ago, the Health Benefit Exchange (HBE) board members decided that its CEO, Mr. Onizuka, deserved a pay raise. His annual salary shot up by 13% – from $157,000 to $177,400, and they made the raise retroactive to August for good measure. After all, it wasn’t like it was their money they were spending.

So, what did Onizuka do to deserve this generosity with taxpayer dollars?  Was it the massive success of his implementation of Obamacare, as demonstrated by the number of people signing up exceeding expectations? Or his depth of knowledge of the rules of the exchange that allowed him to guide it through tough circumstances?

Actually, according to a few public records, not so much.

The Seattle Times explains that Onizuka’s pay raise would bring his salary in line with those of other state exchange CEOs. Evidently the fact that Washington was able to jump over the low bar set by the utter failure of Obamacare in states across the nation makes Washington’s health exchange looks like a relative — albeit a little sad — success.

Not convinced? Well, after reviewing a couple of Onizuka’s email exchanges with his board and staff, you might be even less convinced.

On September 28 — just days before the website’s glitch and problem-filled launch — Onizuka sent an email to board members detailing his excitement and pride for the finished product. Onizuka wrote to assure the board that the “temporarily unavailable… please check back later” message they were seeing on the website prior to its public launch was “a good thing, in fact, a very good thing.”

Although it is unclear why an error message is such a “good thing,” Onizuka goes on to explain that he knew the website had issues but, due to the results of a preliminary test, he felt it was “good enough” to give his go-ahead. Because apparently Onizuka believes that a “good enough” result when dealing with a massive overhaul of the state’s health insurance system is a result that would please the people who paid for said overhaul.

Another example of how “good enough” HBE management was as it prepared to manage this website was the failure of these “leaders” to obtain website URL’s similar to their own. An email exchange on September 20 between HBE Director of Legal Services Brian Peyton, Communications Director Michael Marchand and Onizuka reveals that no one seemed to know whether or not federal funds could be used for purchasing similar domain names—or whether or not URLs similar to the state exchange site had even been purchased. Onizuka discloses that he is not sure that he would want to use money for this purpose. To which Marchand responds that they have already “bought a number of them” and is “not sure how many he wants to buy…” 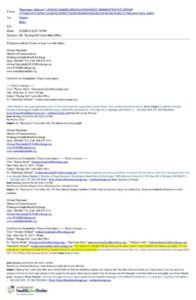 Of course, some private entrepreneurs did find value in those names after the announcement.

The haphazard launch of the Washington health exchange under the leadership of Onizuka continues to produce confusion and frustration. Time, money and resources consumed for a “good enough” finished product should be unacceptable to his board. Instead, it merited a 13% raise from his board for Onizuka and his “good enough” leadership.

And yet still, big-government liberals wonder why taxpayers sometimes say “no” to tax increases to make government even bigger. Maybe the folks paying the bills don’t feel “good enough” about the value they are receiving for their money – or the wisdom of those spending it.

Evidently being “good enough” wasn’t all it took for Richard Onizuka to merit a 13% raise – even though he’d been told in 2012 that a 5% performance raise would be the maximum he’d be eligible for, according to the Puget Sound Business Journal. Turns out that Onizuka deserved more money, according to his communications director, because he hired a consultant to determine that other states were over-paying the people in charge of their exchanges, so Onizuka recommended to his board that he deserved the opportunity to catch up to them in the overpaid department.

This self-dealing at taxpayer expense appears all the more inappropriate given the news out today in the Times  that the state exchange web site continues to have “issues” according to a spokesperson. Those performance issues were noticed over two weeks ago, yet according  to the exchange “we still haven’t located the root cause” and the site remains down.

You certainly have to appreciate the willingness of those overseeing the state’s Obamacare exchange to use creative excuses to give away taxpayer money, even in the face of these “issues”. You have to wonder though, would any of them run their own business this way (assuming that any of them have actually run a business)?