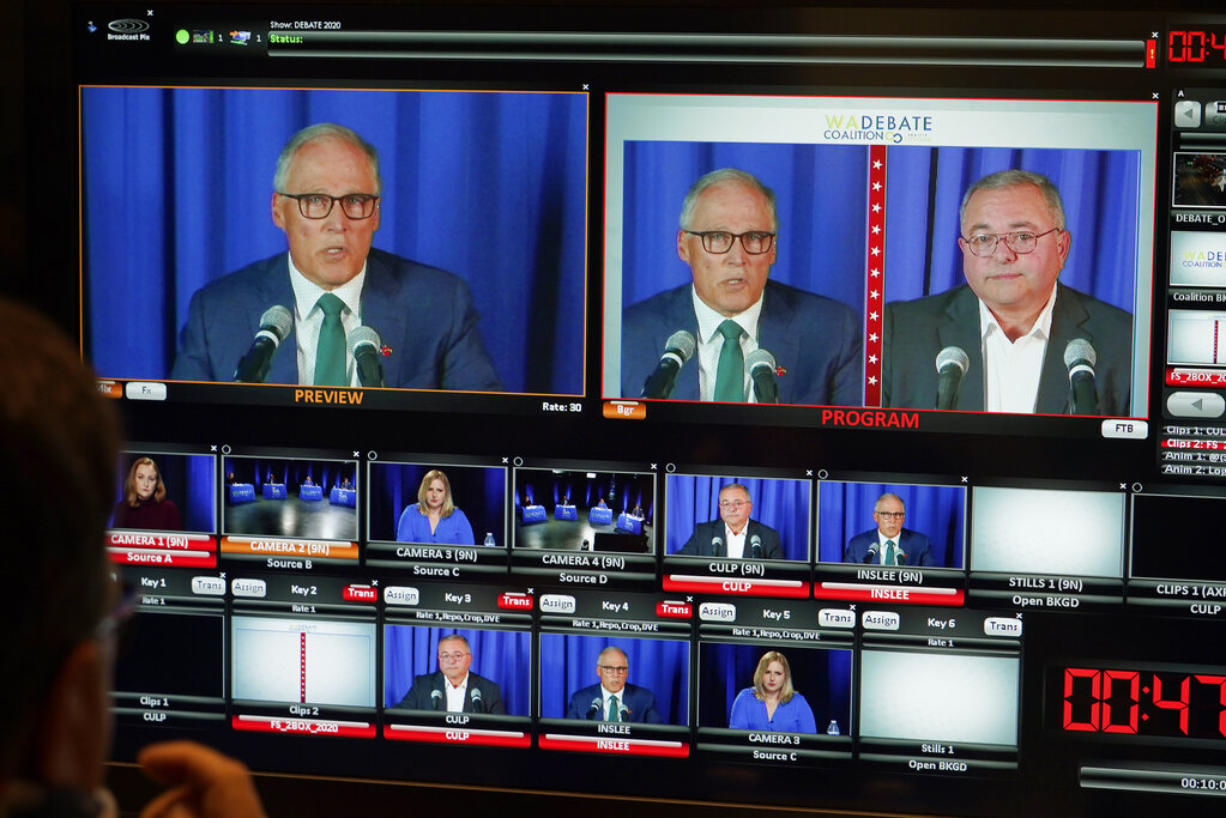 Anyone watching the only governor’s debate between Democrat Jay Inslee and Republican Loren Culp would have thought there was a third candidate in the room – President Donald Trump. Inslee, who tried desperately to avoid any debate and was too scared to be in the room with anyone else, tried to make it seem that way to deflect accountability from himself.

That was clearly the only strategy that failed presidential candidate Inslee had for the debate. Trump seemed to be the focus of his attacks, even though Culp is his opponent. In a debate that certainly provided less fireworks than the presidential debate last week, Culp and Inslee went head-to-head on issues ranging from the state’s COVID response, to wildfires, budgets, and mental health.

Culp took advantage of his most prominent statewide appearance, answering questions directly and providing leadership ideas and solutions which eluded the incumbent. Inslee relied on blaming everyone other than himself for his failures and absence of leadership over the last eight years.

In fact, during the debate, Inslee could not provide any vision for why Washington voters should elect him for a third term.

Culp’s history has included time in the military, a 20-year business owner (no small feat in a Democrat-run state), and a police officer. He understands that public service is temporary assignment and not a lifetime pursuit. Inslee, by comparison, has been a career politician on the public payroll for all but one of the last 34 years. His only real full-time private-sector job dates back to the mid-1980’s, when he was an ambulance chasing trial lawyer.

Inslee’s excuses for his poor job as governor were mind-numbing. When asked about his mandated COVID lockdowns, Inslee thinks he’s done a great job. Inslee’s twisted barometer of success is that no Washington Court has yet struck down his COVID “emergency” edicts. Try explaining that to the thousands of Washington workers without a job and facing ruined livelihoods because of Inslee’s shaky science dashboards and government-mandated economic shutdowns.

Culp, on the other hand, demonstrated a belief in taking personal responsibility for our own health and safety. That’s something the founders of our country would recognize as far better than Inslee’s reliance on unchecked executive power.

Moving to the economy,  Inslee was on record before the debate as saying Boeing mugged him for tax breaks when he first took office, but don’t panic, because now he knows better how to deal with the company now that it is moving jobs from Washington to South Carolina. Inslee believes that under his threat of more punitive taxes and regulations, Boeing will come running back and keep the 787-production line in the state. Maybe Inslee should talk to his fellow Democrat/Socialist Kshama Sawant about how that didn’t work out so well when she pushed for the Amazon head tax.

Culp offered a different view, suggesting that the incumbent doesn’t know what’s going on in the real world given that Inslee has been in the government bubble for decades. Inslee’s lack of private-sector understanding was demonstrated by his tone deaf ‘friends of the family’ public employee pay raises he granted in July, even while small businesses and working people were struggling under his COVID mandates and the toxic economic environment Inslee has created. Remember, Inslee came into the office after promising to veto any tax increases, and yet he has proposed higher taxes in every budget he has proposed since then – and during the debate he would not answer the question of what taxes he would be raising in the budget he must legally submit to the state in December.

Inslee’s evasion (or lie, depending on your definition) reminds us why you should never trust a politician to keep a promise made to get your vote. That’s especially true for a Democrat like Inslee, who depends on special interest groups for campaign cash, in exchange for the higher taxes and bigger government they demand for their contributions.

On racism, Inslee thinks we should do something immediately, by studying the problem without delay. Culp wants to see an even playing field with equal opportunity for all.

While we have peaceful protests in Washington, we have also seen more than our fair share of riots and property destruction. Inslee attempted to deflect attention from his unwillingness to condemn the rioters (remember, those are base voters for him), instead suggesting policing is often a mental health issue. That opened the door for Culp to point out that, if mental health is so important to Inslee,  he would not have allowed Western State Hospital to lose its certification and $50 million of federal funding which instead was taken from Washington taxpayers’ pockets.

Inslee knows that the mental health system is a joke under his watch. When beds are needed for those suffering, too often there are no beds available for mental health patients.

The biggest whopper of the evening came when Inslee was asked about his knowledge of the Capital Hill Autonomous Zone (CHAZ) which sprang up early in this summer’s rioting. Inslee falsely told the public  months ago that he knew nothing about CHAZ, even after the lawless enclave on Capitol Hill had been prominently featured on the national news. Debate moderator Brandi Kruse from Q13 Fox did not let him off the hook so easily and called Inslee out on his selective memory. Suddenly, Inslee remembered he might have known about it and called CHAZ a righteous cause.

I guess in Inslee’s mind vandalizing people’s homes, destroying private property, arson, rapes, and murders are acceptable if committed for a righteous cause. But only if he remembers.

It’s obvious that Inslee is soft on crime. He disarmed the national guard before making them available to the city of Seattle during the rise of the CHAZ. Culp stated he would not have disarmed the officers and would have given them the tools needed to protect themselves and public safety.

Inslee has mismanaged the state agencies, increased state budgets, and hired thousands of new employees, despite the pending economic crisis. The result? Mass unemployment fraud and the loss of the funding for Western State Hospital, but that’s ok according to Inslee. Inslee cares – he ‘feels our suffering’ and don’t worry about the unemployment fraud, because only 2% of the money was stolen due to his incompetency. Just an FYI, Jay, your 2% figure represents $300 million of taxpayer dollars that were stolen. Perhaps you should not dismiss it quite so flippantly.

At the end of the debate, it was clear. After eight years, Inslee still doesn’t have a grasp of what it takes to be a leader in Washington State, and certainly provided no vision for how a third term would be better. Culp, the underdog in this debate, came out barking and showed why he has become a favorite of people who have met him on the campaign trail.

It’s no wonder that Jay Inslee only wanted one debate in this campaign, because that debate showed it’s time for new leadership in Olympia.