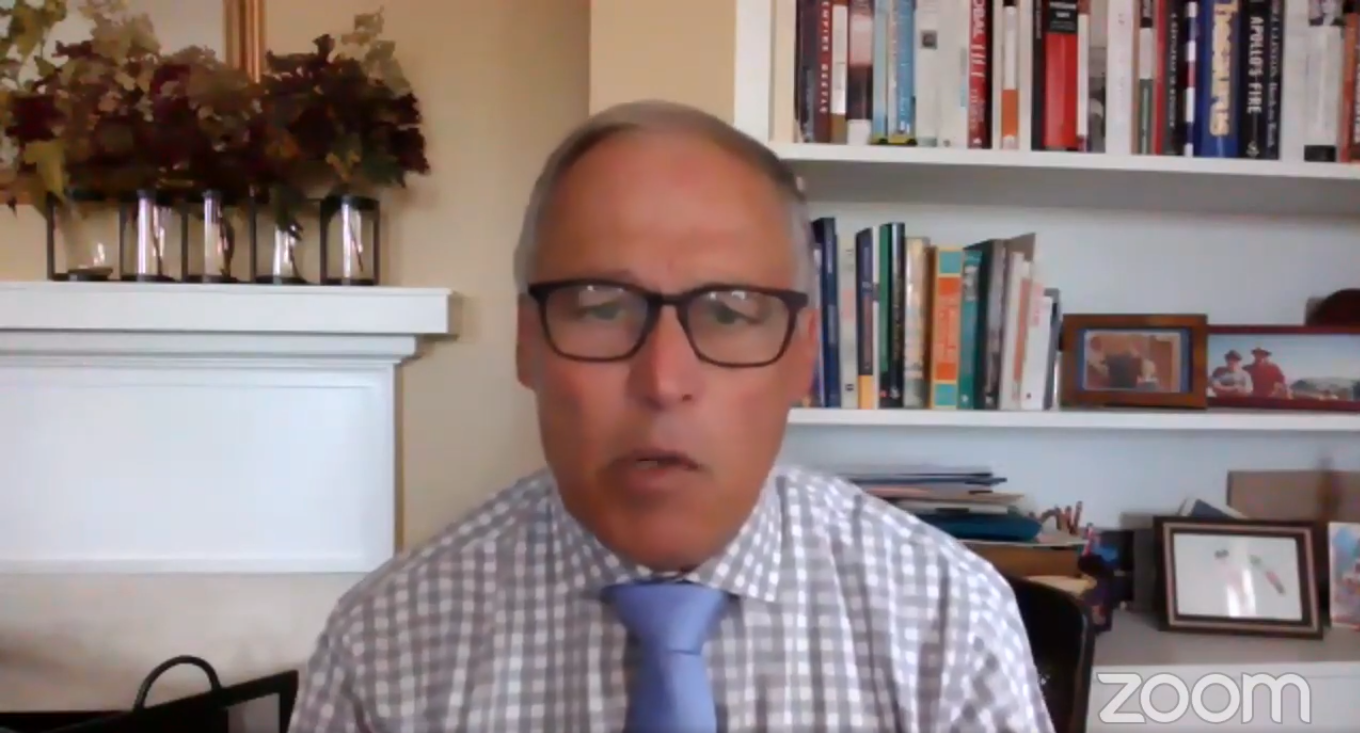 Sometimes politicians get carried away when they hope the media and public aren’t listening, and they are just among “friends”.  Last week, at the 2020 Constitutional Convention of the Washington State Labor Council (WSLC), Democrat Governor Jay Inslee couldn’t contain his excitement as he campaigned for re-election with those who have (involuntarily) given him so much of their dues money over his decades in office, telling them how proud he was to be “hanging with people who gave us the weekend.”

Of course, it didn’t take long for Jay, whose personal schedule shows he works every day like it’s a weekend, to start blaming others for the mess his lack of leadership has caused in Washington State. Despite overwhelming evidence to the contrary, Inslee attempted to explain, unsuccessfully, why he thinks his administration has done so well during the COVID crisis.

For Inslee, it starts with “Believing in science”. Not actually using science to guide good decision-making, but just saying you “believe” is good enough for Inslee. If you doubt this, remember the COVID dials promoted by his administration as the “science” they would follow – but which were proven inaccurate and debunked on national TV.

Inslee’s next meaningless mantra is “We are all in this together”. Just ignore the fact that Inslee’s union friends were given two extra weeks of vacation this year, and the second pay raise in a year through a fake furlough scheme. This phony budget cut will actually cost the state tens of millions of dollars, after Inslee concocted it behind closed doors with his union “advisors”.

Finally, Inslee tells us he relies on “optimism”. Apparently, Inslee is a big-time optimist. And who couldn’t be optimistic in the face of the COVID economic crisis worsened by Inslee’s continuing shutdown and nonsensical regulations, hundreds of millions stolen from taxpayers thanks to the incompetence of his Employment Security Department, out-of-control wildfires caused by bad forest management, and even illegally transported, maggot-riddled apples.

All these things, in Jays’ mind, add up to a success story for him and his friends.

Quoting Inslee talking about his own job performance, because absolutely no one else would say this, “If any other governor can match this, I don’t know who it could be.” Tell that to the thousands of unemployed restaurant workers who are out of work because of Inslee’s stay-at-home edicts. Or the construction workers who lost months of wages because they were forbidden to work, while their government union equivalents, and Inslee campaign supporters, continued to rake in the money. Or all the students who are being robbed of their education because Inslee’s union allies won’t let him consider re-opening schools.

That certainly does not feel like we’re “All in this together”, as Inslee claims.

Demonstrating a little sensitivity about his continuing illegal reluctance to call a legislative special session to address his budget deficit and try to head off the economic crisis his administration has created, Inslee tried to explain why a special session wasn’t needed. Apparently, Inslee doesn’t want a special session because he personally knew that the economy was going to recover. Inslee also knew that those evil state legislators in the Democrat-controlled House and Senate were going to cut benefits for working people, cut mental health spending, cut health care benefits and cut aid to the homeless.

The ‘Inslee-Fib-O-Meter’ must have hit 100% even with his financial donors – no legislators, either Democrat or Republican, stated any of those things. In fact, there was bi-partisan support for legislators to come together to fix the budget before things got too far out of hand. The real story is, Inslee, because of backroom deals made with his union buddies, couldn’t risk the hidden wage-increase promises he made being exposed and overturned by more reasonable minds.

Inslee stands against making any cuts to the bloated government payrolls and to his union friends’ lucrative contracts, despite the rest of the economy suffering.

Inslee is so afraid of his schemes being exposed that he initially wouldn’t even debate his opponent in the governor’s race this year, Republican Loren Culp. After refusing to debate Culp face-to-face, Inslee finally capitulated and said he would only participate in the debate if he and Culp were in separate rooms. What might Inslee be afraid of? Being held accountable for his lack of leadership is the likely answer.

The accidental governor closed his time with his union friends with a question he hopes no one actually asks him: “What have you done for me today”?

Well, Jay, you gave boxes of illegally transported, maggot-infested apples to people who have literally just lost everything they own to a wildfire caused, in part, by policies you support.

If that is what help looks like, Jay – Washington doesn’t want it.