Eastern Washington lawmakers are asking Jay Inslee’s administration to please talk with those impacted by decisions before issuing unilateral orders.

The Washington State Economic and Revenue Forecast Council released its latest report on the economic conditions of the state, and the news ain’t great.  Among the many interesting data points in the report is a chart on employment growth by industry from June 2019 to June 2020.  As expected, nearly all industry sectors experienced severe job losses, especially those related to hospitality (which experienced a 27.5% reduction in employment).  On the plus side, jobs in the “Electronic Shopping and Mail Order” industry increased by 12.8%, as Amazon and other online retailers rushed to meet the public demand to safely deliver supplies to consumers who were limiting trips outside their homes. The only other sector which saw increased job growth was “State and Local Government”, which was up 2.2%. The only reason for this growth is that Democrat lawmakers, during both good times and bad, will ensure the size and cost of government will increase, to ensure more union dues are paid, to ensure more campaign contributions which help them get re-elected. (Economic and Revenue Forecast Council September Report and ERFC Employment Growth by Industry)

Maia Espinoza, a candidate for Washington State Superintendent of Public Instruction, criticized controversial incumbent Superintendent Chris Reykdal for his lack of leadership during the coronavirus outbreak and the state’s failure to be prepared for distance learning.   As the vast majority of schools across Washington State begin to resume the school year with virtual instruction, Espinoza said, “I think the OSPI left parents and districts to fend for themselves on a re-opening plan, and that is why we see a vast majority just opting to go online directly. Because there is a lack of leadership from the Superintendent’s office.” (TVW’s The Impact)

More attention on the 8th Congressional District race continues to pile up, as incumbent Democrat Representative Kim Schrier is attempting to convince voters to forget her extremely poor results in the primary election. Schrier received just 43% of the vote (despite spending over a million dollars before the primary), while Republican challengers combined for over 49% (while spending only $160,000 combined).  Former Army Ranger and health care manager Jesse Jensen has the endorsement of major national figures, including Congressmen Dan Crenshaw (R-Texas) and Mike Gallagher (R-Wisconsin).  Schrier’s poor primary vote totals can be partially attributed to her participating in the Democrats’ complete silence over the violent attacks on public safety and Seattle police officers. (MyNorthwest)

Seattle Police Department officers and personnel lined 5th Avenue to say goodbye to Chief Carmen Best on her last day leading the force.  Best, the city’s first Black woman chief, announced her retirement the day after the Seattle City Council passed radical measures to defund the police force by 50% and reduce the salaries of the department’s leadership.  These extreme actions were taken by the council without any consultation with Chief Best, which many local and national Black leaders (including Rev. Al Sharpton) have condemned as being “racist.” (KIRO Footage and MSNBC via YouTube)

After the city again cleared Cal Anderson Park (previously the city center of the “CHAZ”) of homeless individuals and protesters who were illegally in the closed park on Tuesday, the parks department then hired a private security firm to keep the park clear during the night.  Yet in the evening, the three security officers were intimidated by a group of protesters carrying poles and sticks, and decided to vacate the premises.  The protesters then went on to throw garbage and two “flaming objects” at the Seattle Police Department’s nearby East Precinct. (Seattle Times)

Due to the declining number of daily coronavirus cases, Pierce County health officials believe in-person elementary school instruction could resume later this month.  Currently the county is averaging about 80 new coronavirus cases per 100,000 residents every day, with trends showing it will soon be below the necessary 75 new cases which will allow elementary schools to reopen. (News Tribune)

The Everett City Council reversed its previous objections to the city accepting a $6 million federal grant to pay for 16 police officers to be hired for three years.  Last week, the council failed to act on the proposal from the mayor, stating concerns about the city’s long-term financial obligations if it accepted the funds.  After discussing the issue further with the police chief and learning more about the flexibility of the grant, the council voted 6 – 1 to accept the funds. (Everett Herald)

Eastern Washington lawmakers criticized Governor Inslee’s office for not doing a better job of actually speaking with those impacted by state decisions before issuing orders.  Senator Judy Warnick (R-Moses Lake), Senator Shelly Short (R-Addy), and Senator jim Honeyford (R-Yakima) criticized the Inslee Administration’s process for implementing orders on agritourism businesses just before the normally prosperous Fall season (with pumpkin patches and corn mazes) is to begin. Senator Warnick said, “The outreach from the governor’s office isn’t there, nor the understanding just what the impacts will be on hardworking families.” Senator Short added, “My hope is that the governor’s office does a better job actually engaging with people who are going to be impacted by his decisions, rather than this confusing process we’ve experienced.” Senator Honeyford said the state’s actions on agritourism businesses is the perfect example of why the state legislature needs to be brought back for a special session. (Senate Republican Caucus)

Firefighters who were protecting homes from the Evans Canyon Fires, returned to Selah to find their cars’ windows broken and items stolen. Yakima County Sheriff’s office confirmed the robberies and said, “It is a sad day when criminals will prey on the first responders that are potentially keeping them safe.” We wonder if the Democrats will condemn this crime against first responders, or will they again remain silent as they have with the physical assaults on Seattle police officers? (YakTriNews)

With COVID-19 related numbers improving, Yakima area officials are asking the Washington State Department of Health to permit the re-opening of more sectors of the economy.  State Representative Jeremie Default (R -Selah) specifically asked for the re-opening of fitness centers and gyms, stating that they are “imperative to the physical and mental health of the community.” (Yakima Herald)

Mission Ridge Ski Resort has filed an $8 million claim against Chelan County, saying it is conspiring with other government entities and special interest groups to delay approval of the resort’s expansion.  A spokesperson for Mission Ridge said, “There’s multiple issues of whether it’s being done fairly, properly and timely. There are quite a few things that are concerning for us.” Often a claim is filed before a lawsuit. (Wenatchee World)

The Washington State Democrat Party seems obsessed with Republic Police Chief Loren Culp’s campaign rallies, which may exceed state guidelines for the number of people allowed to gather and express their First Amendment rights.  (First, a quick side note, we want to congratulate the Dems for this time correctly including an actual Washington county name in a Culp-related email, as opposed to previous emails when they repeatedly wrote about a mysterious “Cheval County.”) While the Democrats may be correct about Culp’s campaign not adhering to state orders issued unilaterally by his opponent, it is incredibly hypocritical of the Democrats to continuously condemn the occasional Culp rally while ignoring the daily protests of liberal activists who are consistently breaking local and state laws.  There is an obvious big difference between the Culp rallies and the Seattle protests.  The people involved in the Culp rallies are not attempting the mass murder of police officers (by trying to set fire to a police precinct while applying quick drying cement to exit doors), aren’t injuring dozens of police officers, and aren’t causing hundreds of thousands of dollars in damages to local employers.  This makes some wonder why the Democrats consistently fail to condemn these violent actions while obsessing with the much milder infractions of Culp’s campaign.  (Washington State Democrat Party email) 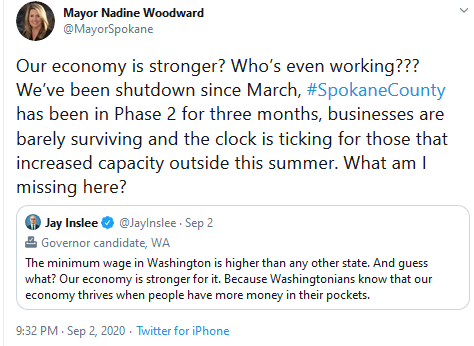 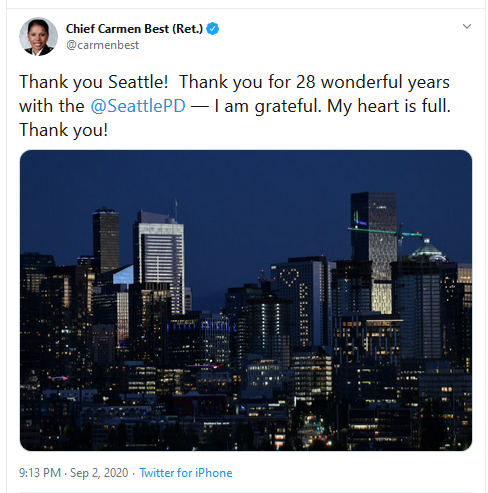