Wildfire smoke continues to impact all regions of Washington State, forcing people with respiratory conditions to remain indoors.  While Governor Inslee went straight to his partisan talking points and blamed the wildfires on climate change, others looked to the state’s failed forest practices which have established conditions that fuel the rapid spread of the fires. (Everett Herald and Washington Policy Center)

Despite a the governor loudly announcing a state employee hiring freeze awhile back, Washington State Commerce Secretary Lisa Brown proudly is bringing former Inslee communications staffer Jaime Smith back on to the state payroll.  In a tweet announcing the move, Brown stated that Smith has a “passion for the environment, health care and education.”  I am sure many of state’s businesses, which are currently experiencing on-going financial challenges, wish she also had a passion for business. Since, well, it is the Commerce Department after all. (Washington State Department of Commerce and Lisa Brown Twitter)

Online debates involving the two statewide Republican incumbents will take place later this month.  The League of Women Voters announced that Washington State Treasurer Duane Davidson will debate his opponent September 17th, and Secretary of State Kim Wyman will meet her challenger September 19th.  Maybe someone in the media will check on whether other statewide incumbents, like Democrat Governor Jay Inslee or Democrat Attorney General Bob Ferguson, have changed their mind and are willing to actually participate in a debate. (The Olympian)

The Washington State Labor Council has begun a petition to encourage legislators to raise taxes, to ensure that state employees experience none of the financial insecurities felt by nearly every worker in the private sector.  While Governor Inslee and the Democrat legislative leadership continue to delay fixing the state’s spending problem/revenue shortfall until after the November elections, government employee unions are busily promoting the Democrats’ desired solution – raising taxes on Washington citizens.  State employees experienced almost no job loss during the pandemic and, in July, most received a second pay raise in 12 months.  The Labor Council has begun a petition encouraging legislators to “find revenue” (i.e., raise taxes) instead of prioritizing state spending. It is worth noting that the state is projected to have more money to spend in the next two years than in its current budget – the budget problem is on the spending side, as revenue is still flowing. (The Stand and Shift)

Moving cargo through Puget Sound ports is more expensive than it is in British Columbia, mostly due to taxes and fees.  According to a recent study from the Pacific Maritime Association, the Harbor Maintenance Tax, rail charges, pilotage fees, and other regulatory costs are more expensive in Washington State than they are at the ports of Vancouver and Prince Albert in B.C.  Thus, American ports are losing “discretionary cargo” (shipments destined to other U.S. and Canadian inland locations) and jobs to British Columbian facilities. All because of policies enacted by politicians who claim to care about those jobs. (News Tribune)

Due to the hostile actions of the Seattle City Council, Amazon continues to move jobs out its hometown.  The online retail company has declined to extend the lease it has on eight floors (more than 180,000 square feet) of the 2201 Westlake building. While the company currently leases approximately 6 million square feet in Seattle, this number continues to shrink while Amazon increases the space it owns/leases in the more business-friendly Bellevue.  These moves will negatively impact the nearby small businesses in downtown Seattle which are dependent on the revenue from Amazon and its employees. (MyNorthwest)

The economic disruption caused by the COVID-19 pandemic, and the on-going disruptive protests, will become a financial windfall for at least one future City of Seattle employee.  Despite already leaning on three deputy mayors and a chief of staff, Seattle Mayor Jenny Durkan announced that she is understaffed and thus needs a Director of Recovery and Equitable Investment to “coordinate citywide efforts related to economic and social recovery from the impacts of COVID-19.” The cabinet level position is “expected to last 18 – 24 months” (are we to believe a government job will end simply because it is no longer needed?) and will pay between $120,000 – $180,000 a year.  (Seattle Times)

Bellevue businesses are working to bring internet access to all students.  The Bellevue Chamber of Commerce announced the launch of the Student Connectivity Fund, which aims to finance internet access for local students.  Bellevue Chamber President Joe Fain stated, “What was once considered a luxury item is now an irreplaceable part of the virtual education experience.” (Bellevue Reporter)

People seeking to break free from state health restrictions are causing many of the fires that have engulfed Washington.  A spokesperson for the Washington State Department of Natural Resources said, “We are experiencing people who don’t normally go outdoors, but it’s what they have, with nowhere else to go to get away from the chaos.” While some of the fires were started by downed power lines, many were believed begun by careless human behavior. (Yakima Herald)

Senator Judy Warnick (R – Moses Lake) suggests Governor Inslee might try getting out of his self-imposed bubble during the coronavirus outbreak, especially when he is imposing health restrictions on businesses.  Sen. Warnick pointed to Inslee’s recent ill-conceived restrictions on agritourism businesses, which needed to be revised immediately after he announced them.  Warnick said Inslee “could have spent a little more time talking with the folks who actually have people come on to their farms, on to their businesses, and it would have been a lot better outcome.” (Pacific Northwest AG Network)

A former Tri-City Herald reporter briefly returned to the newspaper’s pages to pen a tribute to Senator Slade Gorton, who died last month at age 92.  Erik P. Smith, who covered politics for the Herald from 1987 to 1997, wrote about Gorton’s support for Hanford and other issues which made him unpopular in Seattle and likely cost him his re-election bid in 1986.  Smith writes that because Gorton stood up for rural communities “It made him a hero in this part of the state, and in all the other regions that found themselves under siege.” (Tri-City Herald)

While violent rioters are bringing Molotov cocktails to protests and physically assaulting police officers, the state’s chief law enforcement officer is filing yet another lawsuit against the Trump Administration.  Ferguson’s latest lawsuit is challenging federal actions to open a part of the massive coastal plain of Alaska’s Arctic National Wildlife Refuge for oil development (which is what it was originally designated for when it was originally set aside by the government).  Since nearly all products delivered to Alaska come through Puget Sound ports, Ferguson actions to stop development by our Northern neighbor will negatively impact Washington businesses and jobs.  Ferguson continues to use his office to advocate for his partisan opinions on a wide variety of issues, yet he has remained quiet about whether he supports local law enforcement officers who have subjected to nearly daily attacks from protesters. Guess he knows well what his priorities are, like appeasing the far-left base that picks Democrat gubernatorial candidates in our state. (Ferguson campaign email) 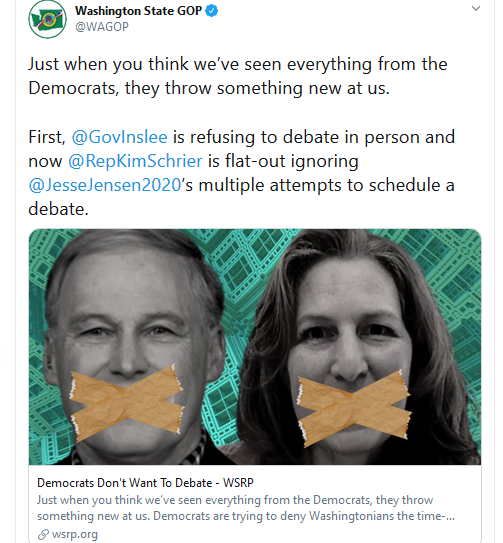 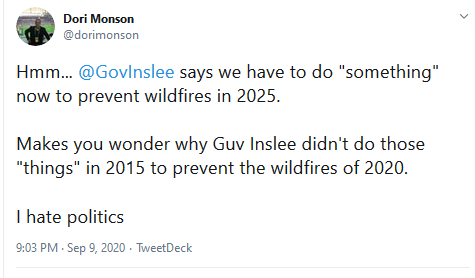