Republican legislators say their fellow lawmakers are running out of time to end the year long one-man rule of Governor Inslee.

Some believe in the “separation of powers”, and so 23 Republican members of the Washington State Legislature have sent a letter to the four caucus leaders asking that they pass legislation ending the governor’s emergency authority over everyone in the state, before the end of the 2021 legislative session.  Republican leaders in both the State House and Senate have previously displayed support for the legislative branch having an active role in safely reopening the state’s economy, but unfortunately their Democrat counterparts are happy to stand aside and let Governor Jay Inslee’s one-man rule continue. Why do anything to stop him, that way they don’t get blamed if something goes wrong?  Representative Vicki Kraft (R – Vancouver) authored the letter and said, “A year of power for one person to set state policies without the involvement of the people’s representatives is not the way our government is supposed to work. Our constitution is very clear about this.” Kraft continued, “We have three branches of government with equal, but separate powers. Our government was created to prevent one branch from single-handedly deciding what’s best for the state. It’s time to end the state of emergency and move on a course to fully return to normal.” (Seattle Times and Washington State House Republicans)

Meanwhile, operators of Washington hospitals claim Governor Inslee’s one-man rule could be causing the latest wave of COVID-19 infections.  Cassie Sauer of the left-leaning Washington State Hospital Association argues that since the governor has not opened up vaccine eligibility to everyone, more young people are becoming infected and are now spreading the virus.  She stated that we “are seeing transmission fueled by people in that 25, 30, 35 age range — they’re not eligible, but they’re spreading it.”  Governor Inslee failed to address the concern when he was recently asked about making younger people eligible for the vaccine. Inslee stated, “We want people to get vaccines, not just be eligible for them.”  Yet, it is the governor’s restrictions which are stopping the current COVID-19 spreaders from obtaining the vaccine. Thanks, Democrats, for the one-man rule! (KIRO-TV)

Because Governor Inslee’s Department of Corrections (DOC) has failed to follow his health and safety guidelines, some 6,200 of Washington State’s 15,000 inmates have been infected by COVID-19.  In addition those sorry results, which Inslee undoubtedly would blame on Donald Trump, another 1,150 state employees at have also contracted the virus.  As a result, a lawsuit has been filed against the state for not promptly vaccinating the inmates, which the suit claims violates the constitutional ban on “cruel and unusual punishment.”  The suit also claims that some DOC staff members have not followed the state guidelines, while others have refused to be vaccinated.  (Seattle Times)

Washington Democrats continue to impose rules which make it more difficult for federal authorities to enforce our nation’s immigration laws.  Instead of following laws while working to change them, Washington Democrats have chipped away at local governments’ ability to assist immigration authorities in enforcing the law.  In 2017 Governor Inslee signed “sanctuary” legislation that prohibits local and state officials from asking if a person is in our country legally.  In 2019, King County Executive Dow Constantine signed a directive stopping the Immigration and Customs Enforcement (ICE) from using Boeing Field to transport immigration detainees. Now the Democrats in the Washington State Legislature have passed a bill (HB 1090) to ban “for profit” detention centers, which is clearly aimed at closing a 1500-bed facility in Tacoma which has a contract with ICE (and is the only for-profit incarceration facility in the state). (MyNorthwest, FOX News, Q13 News, and Washington Legislature Bill Summary)

Seattle Mayor Jenny Durkan posted a video on social media and received back a heavy dose of reality. On Tuesday, Mayor Durkan posted the Downtown Seattle Association’s new video, “Downtown Seattle is Open” on her Facebook page.  The 80-second video is filled with images of the sun rising over the city with shopkeepers and restaurant workers opening their doors, in the hope of drawing consumers back to downtown. Yet, public comments made to Durkan’s post painted a much different picture of what the city’s liberal establishment has done to the once “Most Livable City” in America.  Nearly all comments mention the crime, garbage, homeless encampments, punitive taxes, urine, drugs, riots, boarded-up windows, anti-police rioting, Sawant, poop, hopelessness, CHAZ, anti-business, and other negative images which capture what the city has become.  And since these comments were made by those who “liked” Durkan’s Facebook account, it is no wonder why the one-term mayor has decided she will not be successful in a run for re-election. Thus, “Summer of Love” Jenny will instead join the list of five consecutive liberal Seattle mayors who had their time in the office ungracefully ended by the voters (or the fear of them). (Durkan Facebook Page and Downtown Seattle Association/YouTube)

The Longview and Toutle school districts in Cowlitz County have adopted the federally recommended 3-foot guideline for distancing for their students, as they plan to return to full-time in-person instruction for elementary students and nearly full-time in-person instruction for secondary schools.   Adhering to the new distancing guidelines set by the Centers for Disease Control has made it easier for all students to return to the classroom, much more so than if they had continued to follow the outdated 6-foot guideline.  Students in junior and senior high school will still have remote instruction on Wednesdays.  Meanwhile, districts in neighboring Clark County have yet to decide if they will institute the 3-foot rule for their schools, perhaps because the teachers unions have not given them permission to talk just yet.  (Longview Daily News and Vancouver Columbian)

A new City of Tacoma program will pay those experiencing homelessness $15 an hour to clean up trash along the city’s streets.  This pilot program is aimed at helping people raise enough money to find housing and create opportunities for finding long-term employment. The project will be re-evaluated after a year to see if it is successful enough to continue receiving funding. (Q13 News)

A recent letter to Congresswoman Cathy McMorris Rodgers (R – Spokane) from port, agriculture, and community organizations, and another letter from scientists, condemns Idaho Congressman Mike Simpson’s $33 billion plan to breach the four lower Snake River dams.  The first letter states that port officials along the Snake River oppose the plan because the dams “enable clean and reliable power generation, irrigation of some of America’s most productive farmland, and safe and efficient marine transportation of agricultural products to global markets.”  The letter stated that if the dams are removed, it would end efficient barge transportation of the regions’ agriculture products, which would dramatically increase truck transportation and the amount of greenhouse gasses released into the atmosphere, which would add to climate change.  A British Columbia fisheries scientist stated in his letter to congressional offices that removing the dams would do very little to assist the salmon population, since it is poor ocean conditions which have increased their mortality rates.  Meanwhile, Representative Simpson seems undeterred by the scientific findings and the widespread concerns of those whose lives will be severely impacted.  The congressman recently stated his proposal would be a good match for the Democrats’ upcoming $3 trillion dollar infrastructure bill the Biden Administration is currently putting down in (red) ink. (Lewiston Tribune)

The leaders of three Spokane charter schools assert in an op-ed that if the Democrats in the legislature are serious about closing the “equity gap” in the state’s education system, they would ensure charter schools are funded at the same level as other public schools.  Public charter schools attract a significantly higher percentage of “underserved students” than traditional public schools, because low-income parents recognize that their children have a better chance of breaking out of poverty if they receive a more personalized educational experience.  Yet the Democrat-controlled legislature has previously (at the request of the Washington Education Association) kept public charter schools from receiving funds from local property tax levies.  This amounts to reducing funding by $1,500 – $3,000 per student at the charter schools. The op-ed authors say there are currently bills in the legislature which would change this unequal state funding scheme, and they encourage Democrats to walk the walk on their statements on “equity” and support these bills, for the children. (Spokesman Review) 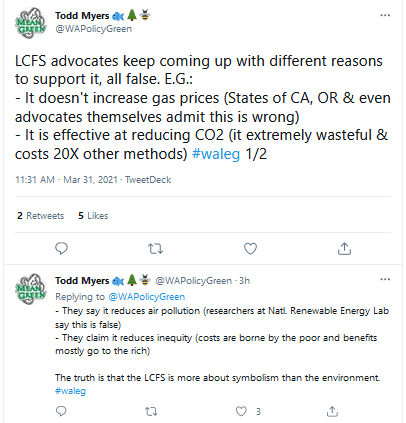